Notes: Odell Beckham Jr. “can smell blood” when he gets in red zone but hasn’t been able to feast 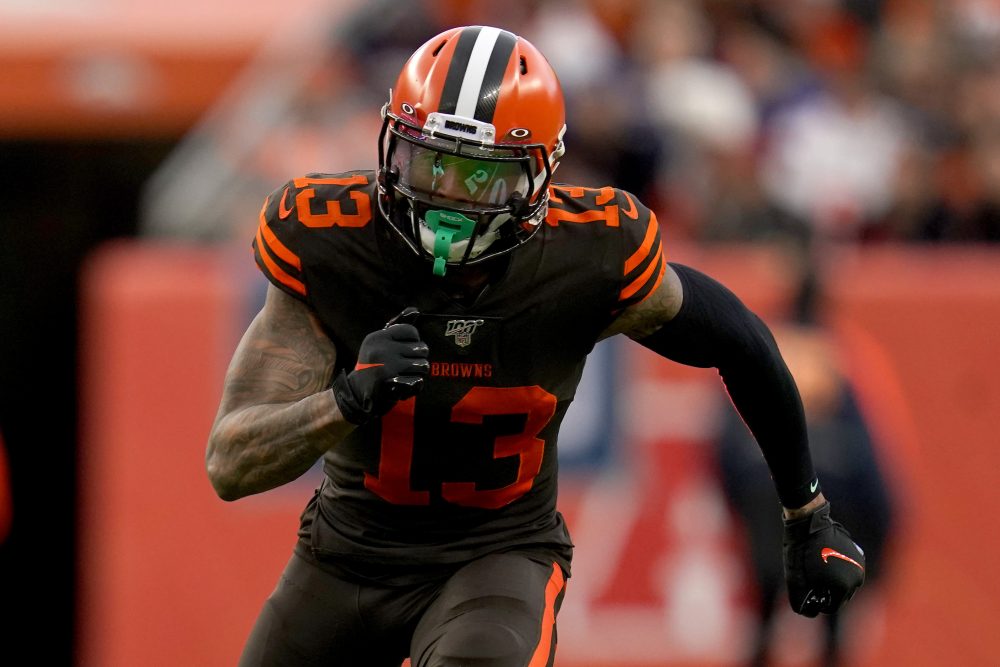 BEREA — Odell Beckham Jr. considers himself a shark in the red zone.

Unfortunately for the Browns, he’s gone hungry this season.

“I can smell blood when I get down there,” he said Thursday. “I’m close to the end zone, I want it. It’s just a matter of finding the right play in the right time.”

Beckham, one of the league’s most talented receivers, had 25 red zone touchdowns in five years with the Giants but has been targeted only three times during his first eight games with the Browns, according to ESPN Stats & Info. His lone touchdown came on an 89-yard catch-and-run.

“Some of it is what they’re doing,” offensive coordinator Todd Monken said of opposing defenses. “Some of it is obviously what we’re doing and I’m talking about collectively, schematically. It’s not like we’re purposely looking one way or looking away from somebody.

“Obviously, when you have that few of targets to somebody like that, then you’ve got to take a look at it and say, ‘How do we get our playmakers the ball?’ That’s every part of the field. That’s really not just (in the red zone), but obviously with our struggles there, we’ve looked at that, and we’ll continue to look at it as we move forward.”

Beckham discussed how he’s coped with the frustration of not being involved in the critical situation.

“I’ve grown, I’ve come to a different place mentally, emotionally, spiritually, however you want to put it,” he said. “I think everyone can see that. I think the world, people, that energy still finds its way to get me upset, whether it’s something about a cleat or a visor or all these little, stupid things, the only people who are worried about ‘em are people doing and saying something about ‘em.

“I’m just going to keep getting tested on it. I think people just want to see me break, they want to see that side that was in there with what I was dealing (with) in another situation. As long as I know in my heart I’m good with where I’m at, nothing’s ever going to really bother me. I’m going to come here, I’m going to do my job, I’m going to try and give 110 every time I can go and that’s just it.”

Beckham, who turned 27 on Tuesday, ranks 18th in the NFL with 575 receiving yards and 31st with 39 catches. He leads the team in both categories but hasn’t had the production expected when he arrived in March in a trade with the Giants.

“I don’t call the plays, I do what I’m told,” he said. “When it gets down in the red zone for the past four to five years, I don’t know how many targets I’ve really had. I get down there, they’re going to double, they’re going to play two high shell to my side, the safeties locked in on me, so it’s tough.

Beckham was removed from the Week 2 game against the Jets by an official for a third-down play because his visor was too dark. He was ordered to change his cleats at halftime Sunday in Denver because they weren’t the right color.

He said he won’t leave the field again during the action if a similar situation occurs.

Beckham has said all season he’s picked on by the NFL but won’t buckle to external pressure.

“The more I tried to live my life for other people, the more unhappy I was with myself,” he said. “This is my life, I’m going to make the decision, I’m going to live with it and whatever people say, it’s no offense, I really just don’t care. I’m OK with who I am. I’m not really out here to hurt anybody by the cleats that I’m wearing.

“I think people have a tough time with someone who’s comfortable in their own skin and I’m as comfortable as they come with who I am.”

With the yearlong offensive struggles with consistency and efficiency — 25th in scoring (19.0 points a game), 19th in yardage (346.0) — media and fans have clamored for coach Freddie Kitchens to give up play calling and hand it to Monken, who’s been successful in that role in the past.

“I came here knowing that I wasn’t going to be calling the plays, so it’s really a non-issue,” Monken said. “So at this point, that hasn’t even been discussed. It’s been discussed more outwardly than it has inwardly, if that even makes sense.”

Kitchens shot down the idea Oct. 28 after the loss to the Patriots.

Receiver Rashard Higgins caught two passes for 46 yards in the opener before spraining a knee. He returned to action Oct. 27 against the Patriots and had one catch for 2 yards in two targets and 13 snaps. He was shut out against the Broncos on one target in 15 plays.

“Obviously he’s a guy that Baker (Mayfield) has real comfort in and we do have to get him more involved,” Monken said. “We do, and have him be a bigger factor in what we do. Again, there’s only one ball, but it has been frustrating I’m sure for him and for us.”

Free safety Damarious Randall (hamstring) was limited in practice for the second straight day, but defensive coordinator Steve Wilks spoke as if he’ll play Sunday against the Bills after missing two games.

“Randall is back, which is a major plus for us,” he said.

The Browns are without safeties Eric Murray (knee) and Jermaine Whitehead (cut), so Randall and Morgan Burnett are expected to start, with Juston Burris and rookie Sheldrick Redwine options off the bench.

“I am excited about the guys that we have back there and I am not worried at all that they are not going to get the job done,” Wilks said.

** Tight end Pharaoh Brown (concussion) returned to practice and was a full participant. He missed the Denver game.

Monken said left tackle Greg Robinson responded “really well” to his one-game benching. He returned to the lineup against Denver.

“I thought he handled (it) the way we hoped he would,” Monken said. “Now let’s hope moving forward that he understands what the expectation of any pro is, and what the team expects from him.”

** Military personnel will be honored Sunday as part of the NFL’s Salute to Service initiative in November.

** The Browns will host their annual food drive to benefit the Greater Cleveland Food Bank before the game. Donations will be accepted outside the stadium when gates open at 11 a.m.