Myles Garrett believes a run to 10-6 is possible and is ready for bigger role, to “win it my darn self” 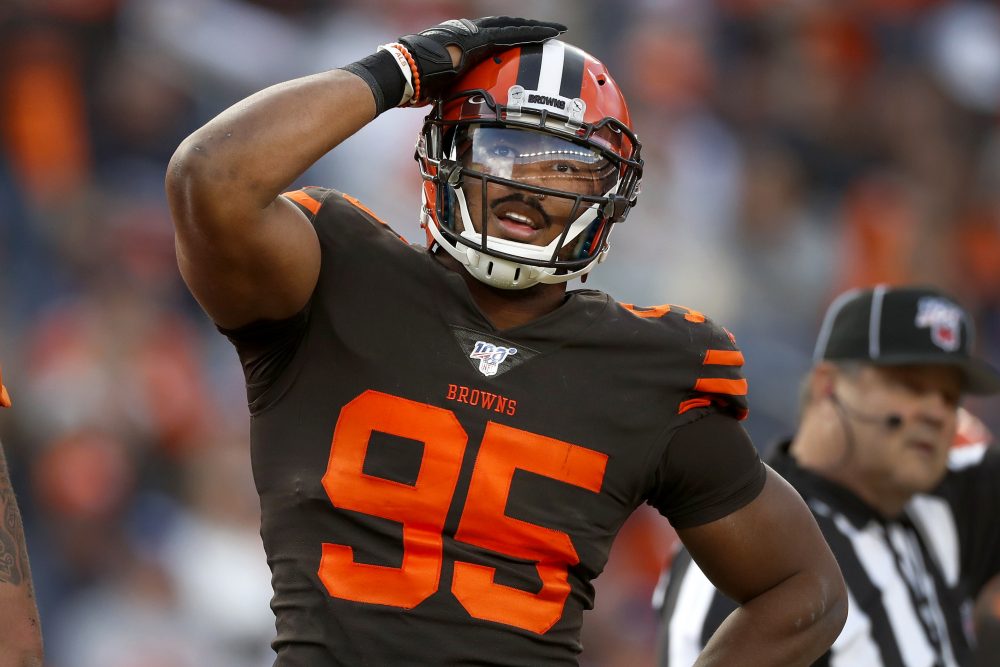 BEREA — Myles Garrett trails Tampa Bay’s Shaquil Barrett 10.5-10 in the NFL sack race but is focused on a different set of numbers — the Browns’ 2-6 record.

“I think Shaq took the lead, but I’m trying to win,” Garrett, the Pro Bowl defensive end, said Friday. “Whatever I have to do. If I have to get five sacks in the game, five (tackles for loss), whatever role I have to fill for us to be in a good position to win or I have to win it my darn self, I’ll do that. So whatever’s required. If I’m in a position to make a big play, I’m going to go out there and do it.”

Garrett is prepared to take even more on his shoulders Sunday against the Bills at FirstEnergy Stadium with Olivier Vernon, the other starting end, ruled out with a knee injury. Chad Thomas is expected to make his first NFL start, with Chris Smith getting more playing time and tackle Sheldon Richardson a possibility to get a few snaps outside.

“It just means we’ve got to step up on the other side,” Garrett said. “I have no doubt that the guys who are in there, Chris, Chad, even Shel if he moves out there, they’re going to get the job done and they’re going to fill that role just as anybody else would.

“And I’m going to have to pick up my play and make sure that there’s no drop in efficiency or effectiveness.”

Garrett has put his campaign for Defensive Player of the Year on hold, transferring his energy into salvaging a season that began with so much promise.

“I don’t see why we can’t be 10-6. There’s eight more games and that’s eight more opportunities,” he said. “I don’t care what the previous record has shown, I don’t care what they’ve said has happened before. You go out there with the right mindset and good amount of want-to, you know what the hell you’re doing, you have your fundamentals down, you can go out there and play with anybody.

“Those three or four plays can go either way and you get those to swing your direction, we can make a run for it.”

The Browns have lost all three home games this year, and Garrett was asked about paying back the fans who’ve supported them.

“I’m more worried about us winning than giving wins to the fans,” he said. “It’s always nice, but I’m worried about the guys in this room, that’s who’s going to stick with us through thick and thin. I believe in them, and they’ve always supported us, but the guys in our room I know aren’t going anywhere and their heads aren’t going to ever hang, they aren’t going to ever bash on us and complain and feel like we need something different, they’re confident in who’s managing us, who’s coaching us that we can win with the guys in this room and that will never change.

“Fans, that can’t always be said, and for the ones who’ve been with us through everything and who remain to be with us, we appreciate y’all and y’all help add fuel to the fire. We’re trying to win for us as well as for y’all.”

Thomas (6-foot-5, 265 pounds) was a third-round pick in 2018 but played only 22 snaps as a rookie and didn’t register a stat. He moved ahead of Genard Avery on the depth chart this year and has eight tackles, a sack and a fumble recovery in 123 snaps. Avery was traded to the Eagles.

“I think his motor, his passion, his anticipation, his understanding of gap control and where has to be and where he fits in,” coach Freddie Kitchens said of the difference in Thomas this year. “It is just a matter of doing it every down now.”

Thomas always believed he was ready to play and didn’t doubt himself when he was a healthy scratch nine times last year and active but didn’t play three other times. He thinks he fits better in new coordinator Steve Wilks’ defense and has benefited from cutting 15 pounds. He was also behind last preseason after sports hernia surgery.

The Browns will miss Vernon, who played his best three games before the injury, but Wilks expects Thomas to be stout in the run game as his pass rush develops.

“Really being physical with the tight ends trying to penetrate and knock the guy out back off the ball,” Wilks said. “He is quick off the ball and he has great acceleration.”

Second-year Bills quarterback Josh Allen will be the target. He’s fumbled 10 times and lost three this year after losing two of eight as a rookie. Wilks has emphasized stripping the 6-5, 237-pounder who likes to run and doesn’t always slide.

“We feel like he’s been careless with the football a few times, so we’re definitely going to try to attack the football,” rookie linebacker Mack Wilson said.

Kareem Hunt has been counting the days and is ready for his return Sunday against the Bills
Disappointing defense has come up small in biggest moments but looking to fix that vs. Josh Allen and Bills, start winning streak