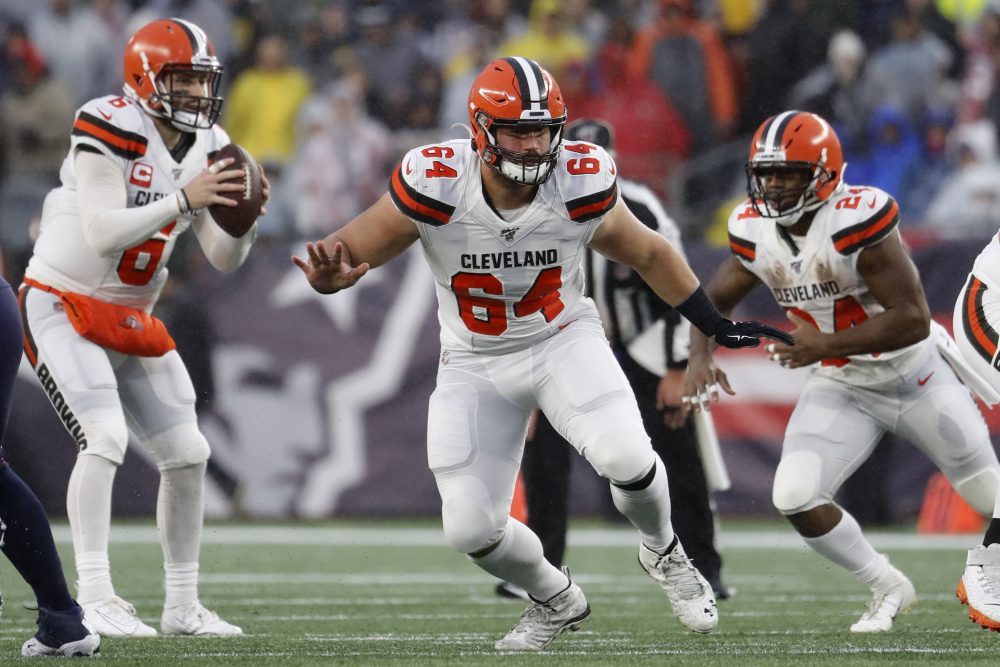 BEREA — Center JC Tretter owes the rest of the offensive linemen a night out, but it’s worth it because he gets to make Cleveland his long-term home.

Tretter signed a three-year, $32.5 million extension Friday morning that includes more than $23 million in guarantees. He was scheduled to become a free agent in the offseason.

“I think anybody wants to feel at home and wanted and I think that’s one of the best feelings is that you can settle in and make Cleveland your home and have that franchise that you have the ties to and not have to move around to three teams,” he said. “That’s really one of the best feelings for me is just knowing now I can be a Cleveland Brown and be happy about that.”

Tretter signed as a free agent in 2017 after four years and 10 starts with the Packers. He hasn’t missed a snap in 2½ years with the Browns despite a high ankle sprain that bothered him most of last season.

“It’s awesome. He works his tail off,” left guard Joel Bitonio said. “He’s a good guy, good teammate, does the right thing. He’s a guy you want on your team and I think the Browns recognize that he has a great relationship with Baker and he’s one of the leaders on the offensive line and to get him tied up for the next three years is huge. It’s well-deserved and hopefully he gets us dinner sometime next week.”

Keeping the connection with quarterback Baker Mayfield was important to the Browns. Tretter helps with the protection calls, and that’s a key relationship with a young quarterback.

Tretter became even more important when Austin Corbett failed to establish himself as a viable replacement for next season and was traded to the Rams. The line has struggled at times this season, but Bitonio and Tretter give it a strong core for the future.

“What it shows you more than anything is we reward guys that play well here, are committed to what they are supposed to do and buy in totally to the team-type concept,” Kitchens said. “JC is all about the team.”

Tretter said contract talks had been going on for a couple of weeks. The average salary of $10.8 million ranks him fifth among NFL centers, according to spotrac.com.

FOR THE MAN WITH EVERYTHING

Receiver Jarvis Landry knew exactly what to get receiver and best friend Odell Beckham Jr. for his 27th birthday Tuesday. He had an orange scooter with “OBJ” on the back parked outside the team facility Monday.

“Probably one of the best gifts I got,” Beckham said.

There was a story behind it. When they were teammates at LSU, Beckham drove a scooter around campus — “my little joy — that his dad got him. Landry asked to borrow it one day.

“I tossed him the keys. He goes out and it couldn’t have been but like 10 minutes later he calls me and he’s like, ‘Man, you’re going to be mad at me,’” Beckham said. “‘I wrecked your scooter, I got hit by a bus.’

The scooter was totaled but Landry walked away with road burn on his leg.

“I’ve always given him a hard time since we’ve been in the league, ‘You wrecked my scooter, I need a scooter,’ but it just was more of a sentimental value than the actual price of a scooter or anything like that, it just was something that brought back good memories,” Beckham said. “It was a funny gift. It was a good one.

Cornerback Denzel Ward was in the perfect spot.

The problem was he stayed there.

Ward had inside position on Broncos receiver Courtland Sutton as they ran down the right sideline in the first quarter Sunday in Denver. As they got to the end zone, Sutton leaped and reached over Ward, who stayed on the ground, for a 21-yard touchdown.

“He needs to go back and attack the ball as we coach and we talk about all the time,” coordinator Steve Wilks said. “The easiest thing for him to do is to come back and go up for the ball at that particular point in time. He may not catch it himself but he would not allow Sutton to catch it, and that is the key thing.”

Ward didn’t expect Sutton to jump over him.

“I thought I had an interception,” he said. “I thought I was in pretty good position. He made a great play, though, he’s a great player, Courtland Sutton. Just got to go attack the ball next time and not really wait on it to get to me.”

Defensive end Olivier Vernon (knee) and defensive back Eric Murray (knee) were ruled out. Neither practiced all week.

Tight end Ricky Seals-Jones (knee) didn’t practice, either, but was listed as questionable on the official injury report. He said he’ll test the knee Sunday morning before the battle with the Bills and will be a true game-time decision.

He took a direct hit to the knee against the Broncos.

Randall was limited Wednesday and Thursday but practiced fully Friday. He missed the last two games and said he’d be a game-time decision Sunday.

Wilks sounded Thursday as if Randall would play. If he doesn’t, Juston Burris would likely get the start.

** Defensive end Myles Garrett (knee) was added to the injury report Friday but was a full participant in practice.

“It’s some bumps and bruises you get throughout the season, but nothing that’s going to stop me,” he said.

** The Bills didn’t list anyone as questionable or out.

TOO HOT TO HANDLE

Mayfield came out firing in Denver with high, hard passes that Beckham and Landry didn’t catch. Mayfield said they asked him to tone it down.

“It might have been the altitude,” Beckham said. “He was whipping it, so we’re all just trying to make plays for him.

“And it was in a joking way but all jokes contain a little truth, so there might’ve been a little bit in there, but we’ve just got to catch it regardless when you get an opportunity, try to make the most of it.”

Tight end Demetrius Harris is trying to move past the touchdown that got away in Denver. He was wide open but lost track of where he was, jumped and floated out of the end zone without getting either foot inbounds.

“That’s most definitely in the back of my head,” he said. “It’s killing me, but at the end of the day, that was last week. I can’t do nothing about it, but most definitely you want to get that opportunity again, make the quarterback right, make me right.”

Harris had three catches for 25 yards against the Broncos, but the one he missed overshadowed an otherwise good day.

“It’s just awareness,” he said. “The ’backer got more depth than we thought he did. I’ve just got to know my awareness and catch the ball.”

Rookie offensive lineman Drew Forbes won’t be activated this weekend, Kitchens said. The deadline is next week, or he must stay on injured reserve for the rest of the season. He returned to practice two weeks ago after opening the season on IR with a knee injury.

** Kitchens said there are no restrictions on running back Kareem Hunt’s workload Sunday.

“We just need to continue to build Kareem’s endurance and some of that stuff kind of factors in,” he said.

** The locker room was divided by the big Alabama-LSU game Saturday. Rookie linebacker Mack Wilson, an Alabama alum, made bets with rookie cornerback Greedy Williams, Beckham and Landry, who all went to LSU.

The loser of the Wilson-Williams bet must get a haircut with the other team’s logo shaved into it. The losers of Wilson’s bets with the receivers must wear a shirt of the rival school and post the picture on Instagram.

Notes: Odell Beckham Jr. “can smell blood” when he gets in red zone but hasn’t been able to feast
Notes: Jarvis Landry energizes team with passion, touchdown, big game