Browns 19, Bills 16: The breakdown — thumbs up, thumbs down, the matchups 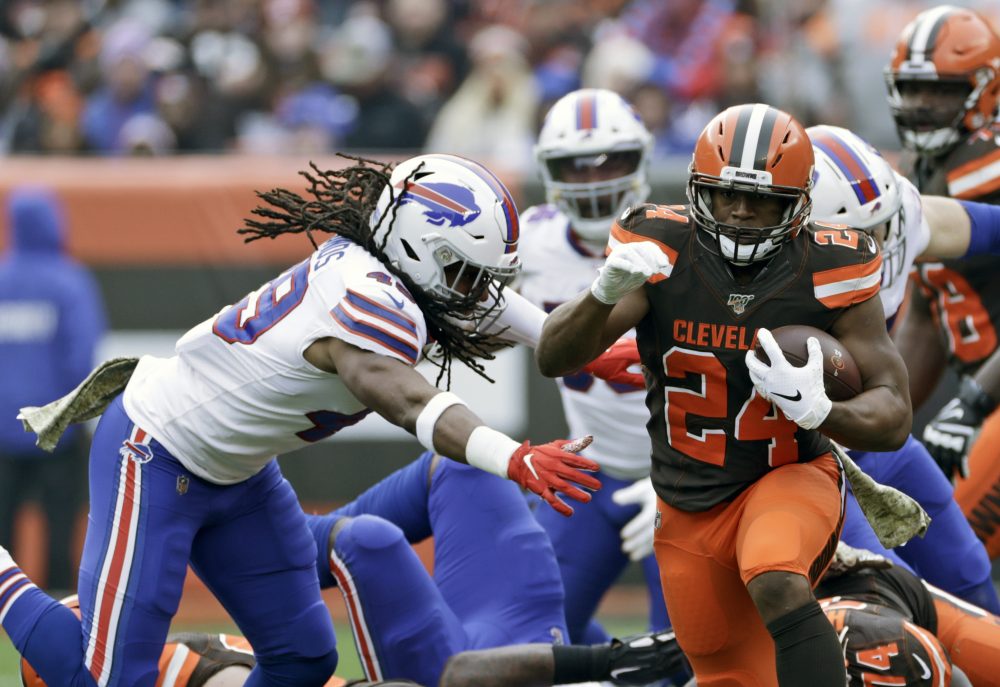 Chubb was the team’s best player through eight games and probably was again Sunday, rushing for 116 yards on 20 carries. He didn’t complain about giving up opportunities to Hunt.

Hunt has been a Pro Bowler and league rushing leader. He didn’t balk when asked to be a lead blocker and decoy for Chubb.

As long as they’re together in Cleveland, Chubb and Hunt will be a dynamic duo. Chubb runs as hard as anyone in the league, while Hunt is an explosive rusher who looks just as comfortable running routes and catching passes. Chubb has 75 scrimmage yards in eight straight games, the longest active streak in the NFL. Hunt tied a career high with seven catches, for 44 yards, and added four rushes for 30.

Whether lined up in the backfield together, or with one or both split out, defenses must account for them.

“Anytime you get two backs in the game, it is tough for defenses to play differently,” quarterback Baker Mayfield said. “You have to bring a guy down and you are worried about the receivers on the outside.”

Hunt was blunt when asked about the two-back sets.

“Shoot, I like it. No matter who gets the ball in that formation, I feel like defenses are going to feel it,” he said.

Hunt gets emotional, makes significant impact in return to NFL

He’s lucky it’s a quick flight back to Buffalo because you wouldn’t want to dwell on this game on a coast-to-coast trip.

The 12-year veteran badly missed a 34-yard field goal with 17 seconds left in the first half, and the Browns kept a 9-7 lead. He flubbed the chance for redemption, coming up short and left on a 53-yard try — also into the Dawg Pound — with 17 seconds left that likely would’ve forced overtime.

“I have been kicking the ball great in practice,” he said. “I have been really happy where I am at right now. This is a learning experience. It is tough. I am going to move through it.”

“I’m confident in Stephen,” he said.

Penalties have been a problem for the Browns all season.

This one might’ve saved them.

The Browns had been stopped on seven plays from the 1-yard line and one from the 2 in the first quarter. They got back to the 1 in the second quarter, but Chubb lost 2 yards on second down and a shovel pass to him on third down fell incomplete. Kitchens, likely still fuming from the first-quarter failure, kept the offense on the field for fourth-and-goal from the 3. The decision would’ve been ripped if the Browns didn’t score, but a false start penalty on right tackle Chris Hubbard saved Kitchens. He sent out Austin Seibert for a field goal from the 8, and the three points were the difference in the game.

“It was so loud down there. It’s crazy,” Hubbard said. “I thought I heard a hut, you know what I mean? So it’s one of those where I’ve got to stay composed and look at the ball.”

“Yeah, we had already talked about what plays we were going to go with,” he said. “We believed we had a good call. It was just our crowd noise seemed to be a little loud when we needed it to be quiet, which is strange at a home game.”

Penalties by the Browns, for 70 yards. After 70 penalties in the first seven games, they have nine over the last two.

“It showed the passion, the fight. The brotherhood we’ve got is starting to come together, and we’re going to have to finish a lot of games like that down the stretch. To just know that this is one of them, games like that build character, build a lot of trust in each other.” — Browns free safety Damarious Randall

** “Internally, yeah, I think we showed that we can come out within a critical game when it is a tight situation and be able to make the plays we needed to. We needed to have that. That goes a long way mentally for everybody in our locker room, but it is a singular focus. We are going to enjoy this win, but it is a short week. We are onto the Steelers.” — Quarterback Baker Mayfield

Baker Mayfield led the winning drive and has gone two straight games without an interception. Nick Chubb and Kareem Hunt in the backfield give the offense something special.

Josh Allen made some big throws but also misfired on some. The Bills came up short on two fourth downs and the final drive.

Tackle Sheldon Richardson forced a fumble but the defense went another game without a takeaway. It was much better against the run (20 carries, 84 yards) and got pressure on Allen at critical times.

The goal-line stands were impressive, but the Bills couldn’t get the one last stop to win the game.

Rookie Austin Seibert made 27- and 47-yard field goals to improve to 16-for-16 on the year but missed a 48-yard extra point. The punt coverage unit allowed a 22-yard return.

Stephen Hauschka missed 34- and 53-yard field goals for the Bills. Punter Corey Bojorquez had a 49.8 net and three inside the 20.

Freddie Kitchens should get the edge simply for winning his first home game. His players bounced back and made the necessary plays on the winning drive. As for the goal-line disasters, it’s not his fault the offensive line couldn’t open a hole or get a push.

Sean McDermott saved a point by taking the Jarvis Landry taunting penalty on the extra point. He would’ve gotten a win if he could trust his kicker.

Commentary: Coach Freddie Kitchens gets win he desperately needed, even if it wasn’t a beauty
Browns-Steelers Preview: 5 things to watch, 3 key numbers