Commentary: Coach Freddie Kitchens gets win he desperately needed, even if it wasn’t a beauty 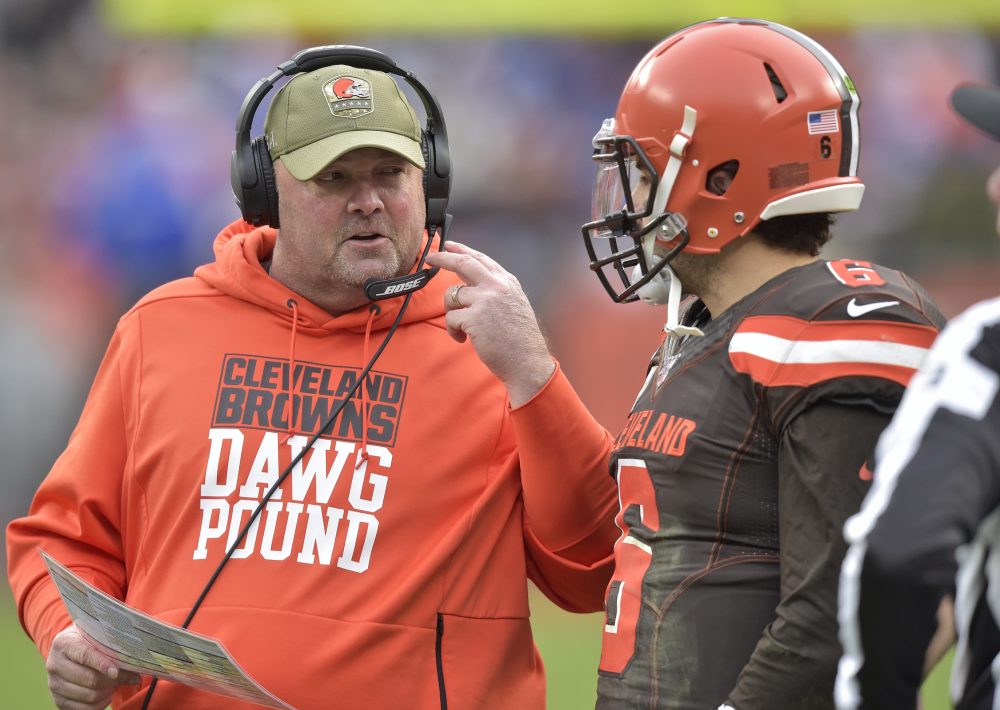 The subject has been located in the choppy waters of the Sea of 3-6, off the coast of Futility. Helicopters, carrying rescue supplies and medical personnel, are closing in. Sources say there is still time to pluck him out of his professional puckersnatch, but it remains a very fluid situation.

Sunday, before a joyous Dawg Pound, the embattled head coach of the NFL’s most disappointing team, stopped the bleeding and paused the growing drumbeat of public discord over his rancorous rookie season as a head coach — and a not taunting penalty too soon.

But even with Sunday’s at-times clumsy victory over snow-belt rival Buffalo, questions still remain over F-Kit. Is he a one-trick pony who can coach a position but not a team? Or is he an unconventional genius still trying to get his head around what it means to be the head coach of the team representing the most desperate fan base in the history of fan bases?

The Browns’ slapdash, last-second 19-16 victory over the Bills provided plenty of ammunition for both sides of that ongoing argument. Get comfortable, because it’s a renewable argument that will be revisited with every remaining game of the irregular regular season.

Sunday’s messy win may have been an even bigger one than anyone not named John Dorsey knows. The Browns’ remaining schedule is peppered with teams of questionable quality, which is supposedly good for the not-very-good-themselves Browns. But it also includes this week’s two-games-in-five-days endurance test, on the other side of which would have offered some extended down time for a coaching change, if a coaching change was necessary.

It very well could have been, had the Browns lost two more home games, Sunday to Buffalo and Thursday, to the Steelers. That would have left Dorsey’s hapless underachievers sitting at 2-8 overall and 0-5 at home.

Those numbers, coupled with nine days between the Pittsburgh game and the one following it, Nov. 24 vs. Miami, would have given Dorsey ample time to pull the plug on the Kitchens experiment, designate another interim coach to finish the season, and then resume still another endless search for Mr. Right.

However, Sunday’s win, at home, buys Kitchens and Dorsey some time. It means the Browns won’t go 0-2 this week, 0-5 at home this year and 2-8 through the first 10 games of the season. All that’s good for Kitchens, but let’s not get carried away.

Indeed, Sunday’s game may have been between the worst 6-2 team and the worst 2-6 team in the NFL. For much of the afternoon the two teams played like it, starting with a first-quarter taunting penalty on Jarvis Landry, following his 17-yard touchdown reception from Baker Mayfield.

The penalty added 15 yards to Austin Seibert’s extra-point kick, which he missed. In the second quarter, the Bills scored a touchdown, didn’t taunt the Browns, kicked a normal-length extra point and led 7-6.

More evidence still for Kitchens bashers of the lack of discipline that has plagued the coach’s unruly bunch in the first half of the season.

But the worst was yet to come.

It was a series of stupefying failure. That it came in a game the Browns ultimately won raises all sorts of uncomfortable questions.

So we’ve got that to look forward to Thursday vs. the Steelers.

Has a team ever used its entire draft on offensive linemen?

At one point the game was tied at 9, a score which should have been an embarrassment to both teams. Landry’s taunting penalty became an issue late in the game when the Browns were trailing 16-12 instead of three 16-13.

But a late touchdown pass by Mayfield ended the Browns’ four-game losing streak and probably saved Kitchens through Thanksgiving.