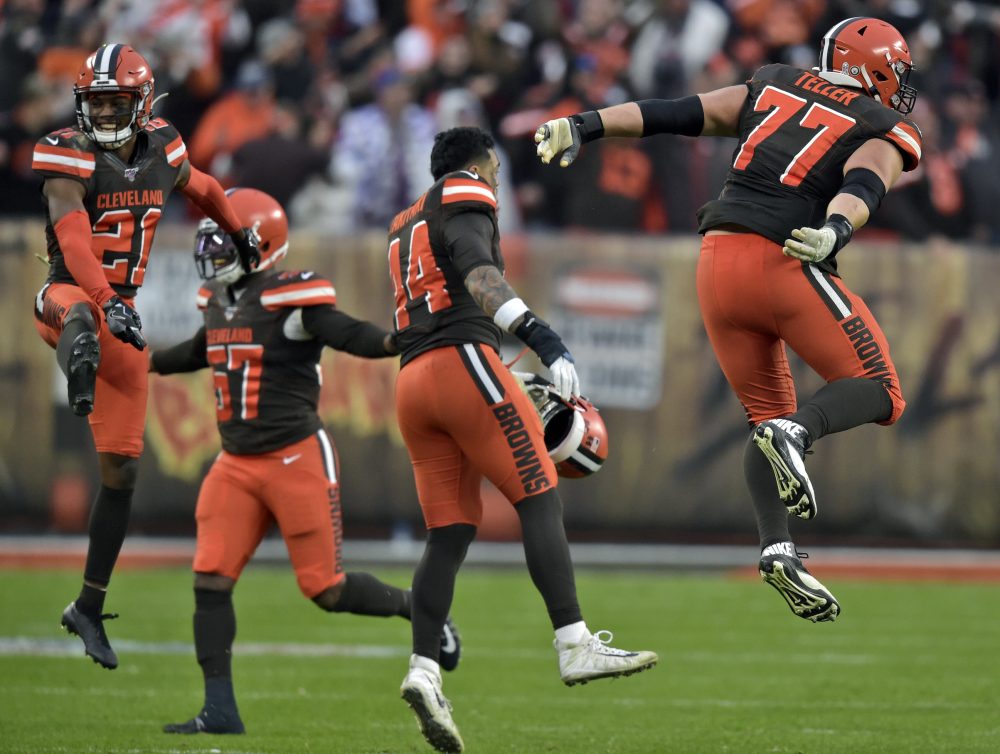 CLEVELAND — Baker Mayfield knew he was about to take a wallop, or two, as he lofted a pass toward the left sideline. Receiver Jarvis Landry found the ball over his other shoulder, ran under it and finished the improbable 24-yard completion.

The play was crucial as the Browns needed a touchdown to retake the lead in the fourth quarter Sunday against the Bills at FirstEnergy Stadium in a game they were desperate to win. It also put them back in their house of horrors — the deep red zone.

The Browns had wasted chance after chance for touchdowns in the first half, spending an eternity near the goal line on two occasions and leaving with only three points total. In their final shot, they finished the job.

Mayfield rediscovered receiver Rashard Higgins with a 7-yard touchdown with 1:44 left, and a missed 53-yard field goal by Buffalo’s Stephen Hauschka with 17 seconds remaining allowed the Browns to walk away with a 19-16 victory.

The Browns (3-6) stopped a four-game losing streak, and coach Freddie Kitchens got his first home win after three losses to open the year.

“Having a tight victory against a great team is something that we needed, especially at home,” said Mayfield, who was 26-for-38 for 238 yards, two touchdowns, no interceptions and a 102.7 passer rating. “Kind of getting the monkey off our back with that one. The first win at home in Game 9 isn’t something that usually happens, but it can get us going from here.”

The opportunity to build on the moment and perhaps rekindle playoff talk comes quickly. The Browns return to the lakefront Thursday night to face the Steelers (5-4) on national TV.

Pittsburgh, which has won four in a row, better be ready for the two-headed running back attack of Nick Chubb and Kareem Hunt.

Chubb was his usual sensational, reliable self, rushing 20 times for 116 yards. Hunt was the new toy for a misfit offense, coming off an eight-game suspension for violating the league’s personal conduct policy and doing some of everything.

He caught seven passes for 44 yards, including a 9-yarder on third-and-7 on the winning drive, rushed four times for 30 yards and led the way for Chubb as a blocker. His first game since Nov. 19 with the Chiefs had him emotional.

“Amazing. Amazing,” Landry said. “He’s been sitting on a lot of energy and the passion and ability and I’m happy we got an opportunity to see it tonight.”

The Browns believe their season can be a story of resilience and perseverance after failing to meet lofty expectations in the first half of the season. The win over the Bills (6-3) was a good start.

The Browns reached the 1-yard line on two possessions in the first half and left with three points — only after right tackle Chris Hubbard was called for a false start on fourth-and-goal from the 3, forcing Kitchens to change his mind and kick a field goal.

The truly exasperating sequence came in the first quarter with the Browns up 6-0 after a 17-yard touchdown pass to Landry on the opening drive. Landry was called for taunting in the end zone, and rookie Austin Seibert missed the 48-yard extra point.

The Browns reached the 1-yard line on their second drive with a 24-yard Chubb run in which he wouldn’t go down. The Browns ran seven plays from the 1 and one from the 2 and couldn’t score.

Chubb ran five times for minus-2 yards as he was met behind the line time and again. Receiver Odell Beckham Jr. was targeted three times, drawing two pass interference penalties in the end zone and having a pass broken up by cornerback Tre’Davious White.

The season-long nightmare in the red zone was transformed when Higgins caught the winner, just as he had dreamed Sunday morning.

“We were not perfect by any stretch of the imagination, but I thought those guys showed desire, determination and played with passion,” Kitchens said.

Commentary: Kitchens gets win he desperately needed, even if it wasn’t a beauty

The Browns appeared headed to their fifth straight loss and more calls for Kitchens’ job when the Bills went ahead 16-12 on Josh Allen’s 1-yard sneak with 5:26 left.

The Browns had no luck anywhere near the goal line all day. Mayfield was sacked in the end zone for a safety that tied the game at 9 early in the third quarter, and an Allen fumble on third-and-10 bounced forward and was recovered by guard Jon Feliciano for a first down at the 1, leading to the sneak, Allen’s second rushing touchdown of the day. He was 22-for-41 passing for 266 yards and a 73.8 rating.

The Browns didn’t cave. Mayfield saw to it.

He got the ball back with 5:21 left at the Cleveland 18-yard line. He threw 13 yards to Beckham (five catches, 57 yards) and 9 yards to Hunt on third down, which followed an incomplete shovel pass that was originally ruled a fumble the Bills returned for a touchdown.

“I did not even get upset. It was a lot of wasted energy,” Kitchens said. “That is why you flip it.”

Chubb ran for 21 yards, then came the pass to Landry. Bills linemen Jordan Phillips, Jerry Hughes and Shaq Lawson converged on Mayfield, but he was able to fling one toward Landry, who ran across the field from right to left and made a great adjustment to spot the ball and bring it in.

“It was a helluva throw,” said Landry, who had nine catches for 97 yards and the TD. “The safety was coming back over the top, guy inside of me, probably the only spot that that ball can be completed.”

Mayfield was limping when he got up and was asked where he got hit.

“Everywhere. All and in between,” he said.

The defense that hasn’t played well when it matters most stopped the Bills in time to force a long field goal try by Hauschka, who had already missed wide left from 34 yards at the Dawg Pound end. The 53-yarder was short and left, and the Browns celebrated like they hadn’t won since Sept. 29 in Baltimore.

“No rah-rah speeches, everybody knew what they had to do,” defensive tackle Sheldon Richardson said.

The Browns aren’t ready to give up on the dream yet. Not after Mayfield led his first fourth-quarter comeback of the season.

“He’s confident. This is what he does,” said Higgins, whose only target was the winner. “If he’s nervous, we’re nervous. He’s confident and he gives us confidence, and we know we’re about to go down to score. We all felt it.”