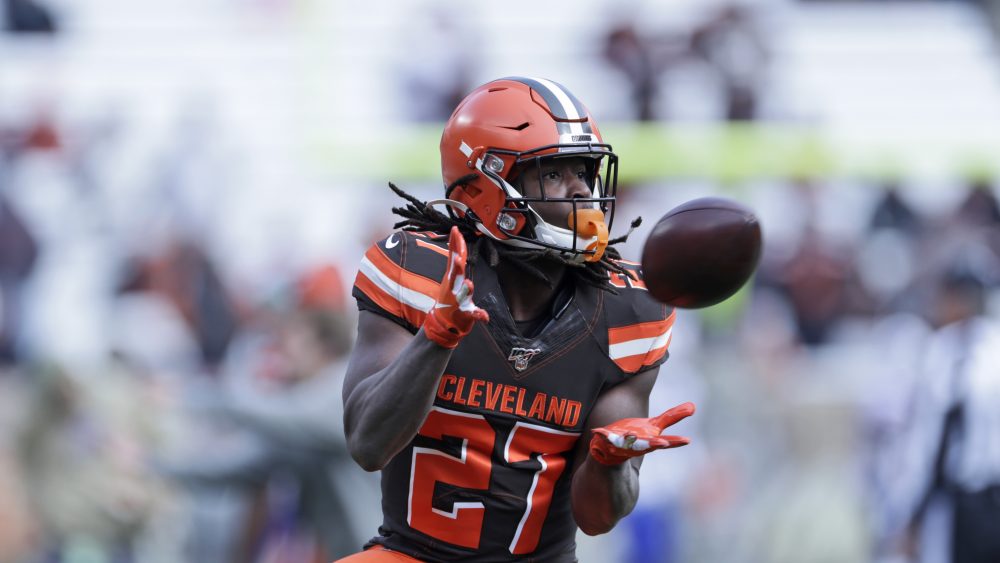 CLEVELAND — Running back Kareem Hunt found a little something extra among the helmet, pads and uniform in his locker when he walked into FirstEnergy Stadium on Sunday morning.

Browns general manager John Dorsey had placed a rock on the top shelf.

“This actually has a lot of meaning,” Hunt said. “Always stay solid, you have to be solid as a rock. This rock ain’t going to bend or break.

“I looked at the rock. I started rubbing the top of it and everything. I’m going to keep it with me.”

Hunt was rock-solid in his Cleveland debut — a 19-16 victory over the Buffalo Bills — and he was happy just to be back on the field. He missed nearly a year of NFL action — the final five games of 2018 after being cut by the Kansas City Chiefs and the first eight games of 2019 while serving a suspension — after a video surfaced showing him pushing and kicking a woman in a downtown apartment building.

The Browns signed Hunt during the offseason and he waited patiently to join his new teammates in a real game.

“It’s not enough words to describe how I felt out there,” he said. “I was so emotional, hyped, sometimes I was just thankful, sad … a couple times I thought I was going to shed a few. It felt so good to be back out there and it’s what I love to do.”

Hunt trotted onto the field for the second play of the opening drive, and served as the lead blocker on Nick Chubb’s 21-yard run. He came in for a second play on the drive and caught a short pass from Baker Mayfield for a 7-yard gain.

“I feel like I could’ve done more,” Hunt said. “I’m kind of disappointed with myself with that run, but it was the first one. It was a little screen play.”

“Anytime you get two backs in the game, it is tough for defenses,” Mayfield said. “Kareem is such a dynamic player. He is able to block or run the ball when he needs to. The last drive, he made a great cut block for Nick Chubb on an outside zone play that really sealed the deal for us to get into a good, manageable down and distance. He just does a lot of things well.”

Hunt said lining up next to the quarterback with another running back on the other side was something new for him. He said he shared the backfield a few times with receiver Tyreek Hill while in Kansas City, but the formation is a bit more formidable with Chubb.

“I just go out there and play with a lot of heart and effort and, shoot, (Chubb) does, too. That guy’s a freak,” Hunt said. “We both go out there, I tell him we’re going to lay it out on the line, we’re going to do it together. No matter who gets the ball in that formation, I feel like defenses are going to feel it.”

Defenses are probably not happy about Hunt’s return. The Pro Bowl running back, who led the NFL in rushing during his rookie season in 2017, joins high-level offensive weapons in Chubb, Mayfield and receivers Jarvis Landry and Odell Beckham Jr.

“I think we saw how dynamic our offense was when we get those guys the ball,” Landry said. “Kareem’s effort was amazing. All of his efforts — second, third, fourth — were amazing.”

Overshadowed in the return to football was the fact that Hunt also returned home. He was born in Elyria, played football at Willoughby South High School and dreamed of one day playing for the hometown Browns.

“It was always a dream driving down (I-)90 and seeing the stadium right along the water,” Hunt said. “Like, ‘Wow, that’s a big stadium, way bigger than Willoughby South. I’d love to play in that.’