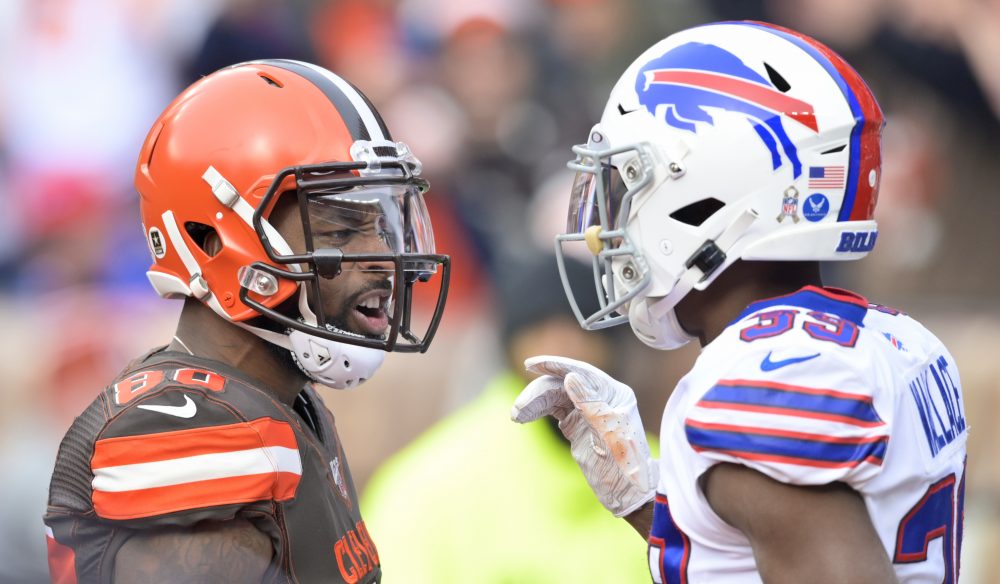 He didn’t mind that a penalty came with it.

“I really just wanted to come in and do my part and make sure that every ball that was thrown my way i caught,” he said after a 19-16 win over the Bills. “Everything that I could do to help the team. I kind of flipped my mindset and I found energy from somewhere. I know that a lot of people feed off of that.”

The officials thought Landry took the energy too far after he caught a 17-yard pass from Baker Mayfield to complete the game’s first drive. Landry caught the pass against cornerback Levi Wallace, then quickly got in his face, drawing a 15-yard taunting penalty.

Bills coach Sean McDermott elected to take the 15 yards on the extra point, rookie Austin Seibert missed from 48 yards and the Browns led 6-0.

He never lost the passion, leading the team with nine catches for 97 yards, including a difficult 24-yarder with 1:50 left to set up the winning touchdown pass to Rashard Higgins.

Coach Freddie Kitchens said Landry didn’t apologize for the taunting flag, nor did he expect him to.

“No, he did not say anything. I have total faith that Jarvis was going to come back from plays like that,” Kitchens said. “He just let the moment get into him a little bit. I am not going to comment on (the call).”

Landry said he isn’t the type of player who taunts.

“I wasn’t cursing him out, I wasn’t doing none of that. I was just looking at him,” he said. “At that point, what do you do? People get sacks, people do the same thing all the time.”

He is the type who provides fuel for his teammates.

“I feel like everybody feeds off of it,” he said. “I mean, you look in the beginning of the game, you look throughout the whole game, the crowd was in it, we’re in it.

His teammates love that about him.

“That’s the passionate guy we are looking for in No. 80, a guy that is a leader on our team, not just the offense,” Mayfield said. “He set the tone. He needs to continue to do that and make those plays. We trust him.”

“It was amazing. When I felt I needed a lift, he gave me a lift,” receiver Odell Beckham Jr. said. “He’s always going to uplift this team. He’s in the huddle telling us, ‘We’re not going to bend, we’re not going to fold.’ And he’s a true leader, he’s always been that way.”

Receiver Antonio Callaway was a healthy scratch for disciplinary reasons, a late surprise to the team.

“That is between Antonio and I,” Kitchens said, declining to provide details.

Callaway had been the No. 3 receiver in the four games since he returned from a drug suspension to start the year. He warmed up even after he had been announced as inactive.

Higgins, who caught the winning touchdown, took his spot as the third wideout behind Beckham and Landry. Callaway has struggled with inconsistency and missed assignments.

Mayfield was asked his reaction to the news.

“Flush it. Be able to say next-man-up mentality,” he said. “We are counting on somebody else to step up and make a play for us. Whoever that is, they need to know that.

“Obviously, he was going to be a part of the game plan but things happen.”

Nick Chubb was stuffed on five runs over an eight-play sequence in the first quarter. Four came from the 1-yard line and another from the 2. He totaled minus-2 yards, including a loss of 2 on fourth down from the 1.

Chubb had no room to run, but Kitchens said he’ll go right back to him next time he has a chance.

“If we get down there again, I am running it again,” he said. “I am going to tell them that tomorrow. They know that.

Left guard Joel Bitonio appreciated the vote of confidence but said something’s got to change.

“We’ve got to figure out a way to block it,” he said. “He can call whatever he wants, but the plays are made to score and we’ve got to execute and be ready to execute our assignments and score touchdowns.”

Mayfield finally took a couple of deep shots for Beckham, but they were unable to connect.

“We’re close,” said Beckham, who had five catches for 57 yards. “It’s something you can take as a positive, to have the opportunity and to see it and now I know what I have to do to get better to correct that and not let that happen again.

“It just felt good to have the opportunity to do that. I didn’t come away with much of any opportunities today. It’s kind of like a long foul ball. If you foul one straight back, it means you’re right on it, you just missed a little bit.”

Defensive end Chad Thomas made his first NFL start, in place of Vernon, and got his second sack.

** Beckham and Landry weren’t fined for a uniform violation last week when they were ordered to change cleats at halftime.

** Defensive tackle Sheldon Richardson was fined $21,056 for a hit to the quarterback’s head against Denver.

** Tight end David Njoku ran sprints shirtless before the game. He’s returning from a broken wrist and must sit out one more game before he’s eligible to return from injured reserve.