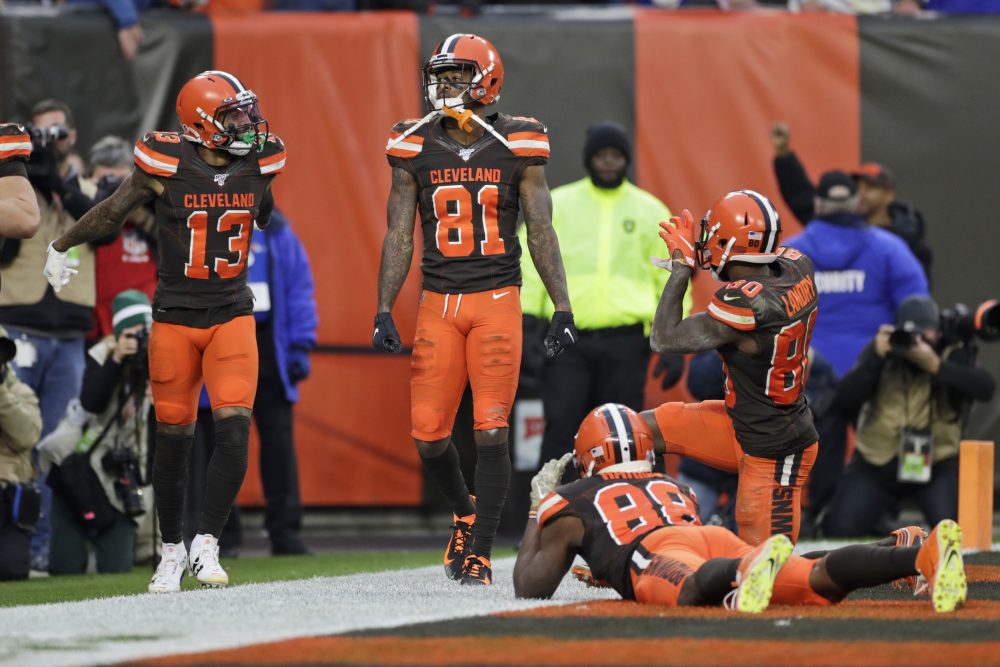 CLEVELAND — Browns wide receiver Rashard Higgins knew his chances were dwindling so when one finally came his way, he wasn’t about to blow it.

Higgins was only targeted one time by quarterback Baker Mayfield on Sunday afternoon but it was for a 7-yard touchdown catch late in the fourth quarter that helped Cleveland pull out a 19-16 victory over the Buffalo Bills.

Not that Higgins was surprised he found the end zone.

“I told Odell (Beckham Jr.) the whole day that I had a dream that I scored,” he said. “I didn’t say I scored like that, on the game-winner, but I told him I scored and it felt great. During my dream I woke up pretty fast because I scored and I was excited and I was ready to walk the red carpet.”

Indeed “Hollywood” Higgins did strut down the “red carpet” — the area painted white behind the end zone — after scoring the go-ahead touchdown Sunday. It was a swagger that had been missing most of the season.

After a breakout season in 2018 — 39 receptions for 572 yards and four TDs in 13 games — and a strong training camp this summer, Higgins sprained his knee while blocking during the season-opening loss against Tennessee and missed the next four games. He was finally active for the Seattle game, but didn’t play. Since then, he has been used lightly and has not seen a lot of balls thrown his way.

Higgins entered the season as the No. 3 receiver behind Beckham and Jarvis Landry, but had dropped behind Antonio Callaway, who has been plagued by dropped balls and inconsistent route-running, on the depth chart.

Callaway was inactive against the Bills for disciplinary reasons, opening the door for Higgins to see more action on the field. He was ready when the team needed him most.

“I was one-on-one with the guy,” Higgins said. “I had a seam in along the baseline and I just kind of shook him. He grabbed my face mask and I kind of grabbed his back, so there was like a little tussle right there, and then I was just wide open. I won the route.”

The touchdown catch wasn’t just a relief for Higgins, who said he has had a lot of locker room support during his tumultuous season.

“For him, it has been a frustrating year,” Mayfield said. “Getting in there in critical moments and making plays like that can do a lot for someone’s self-confidence. I am hoping that carries over.”

That may require a little help.

“I need more dreams, huh?” Higgins said with a smile.

Disappointing defense has come up small in biggest moments but looking to fix that vs. Josh Allen and Bills, start winning streak
Kareem Hunt gets emotional, makes significant impact in return to NFL