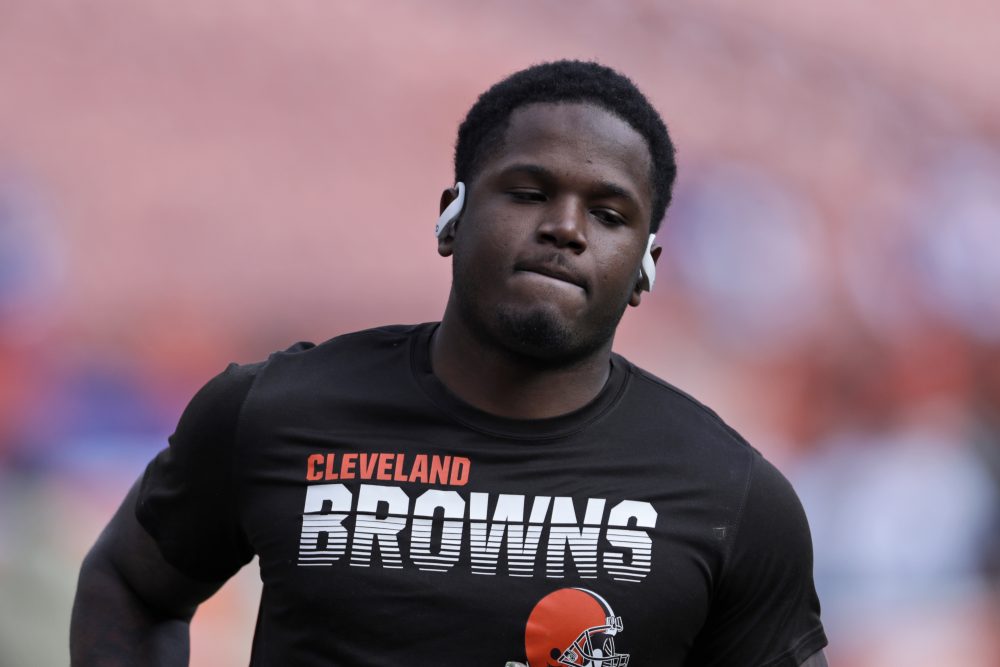 Receiver Antonio Callaway’s punishment is one and done.

“It was only for yesterday,” coach Freddie Kitchens said Monday on a conference call.

Callaway was benched Sunday morning as a surprise healthy inactive for the Browns’ 19-16 win over the Bills at FirstEnergy Stadium. It was a late disciplinary decision, as quarterback Baker Mayfield said Callaway had been part of the game plan.

Callaway was drafted in the fourth round in 2018 despite a history of off-field trouble. He was suspended for his final year at the University of Florida for his involvement in a credit-card scam and failed a drug test at the scouting combine.

He was suspended for the first four games this year for violating the NFL’s drug policy.

Upon his return he assumed the role as the No. 3 wideout behind Odell Beckham Jr. and Jarvis Landry but struggled with inconsistency and poor route-running. In four games he has eight catches for 89 yards.

“I’m not sure, I don’t know if he’s gotten the message or not but I’m not wavering,” Kitchens said of the benching. “But what Antonio and I talk about stays between Antonio and I.”

The setback for Callaway must be disappointing given the organization’s history of giving him extra chances.

“Well, always want our guys to make good choices,” Kitchens said. “I’m not going to talk anymore about that situation. I did what I felt like I needed to do, and it’s over.”

Rashard Higgins replaced Callaway as the third wideout, playing 33 snaps and catching the winning touchdown on his only target. Damion Ratley was made active instead of Callaway and played one snap on offense.

With the Steelers visiting Thursday night, it’ll be interesting to see if Callaway works right back into the rotation, especially with running back Kareem Hunt effective as a receiver.

Kitchens has been preaching steady improvement throughout the season and pointed to an important example Sunday.

On the opening drive, Landry caught a 17-yard touchdown pass in the end zone after a hesitation move before the goal line. He grabbed the ball with cornerback Levi Wallace in coverage down the right side.

“The first touchdown was a better execution of a play that we struggled with earlier in the year, so that was good,” Kitchens said. “So we got better in a couple of different areas last night, and Jarvis played a big hand in that of being precise, being where he was supposed to be when he was supposed to be there and then making the plays once he’s there.”

Landry led the team with nine catches for 97 yards.

The Browns didn’t practice Monday but were required to submit an estimated injury report in advance of the game against the Steelers. They listed defensive end Olivier Vernon (knee) and defensive back Eric Murray (knee) as not practicing and tight end Ricky Seals-Jones (knee) as limited. The three were inactive Sunday.

The Steelers expect to have running back James Conner after he missed two games with a shoulder injury. The Steelers listed him as a full participant in the estimated practice report.

Conner, who made the Pro Bowl last year in his first season as a starter, has 97 rushes for 380 yards, four touchdowns and a 3.9 average in seven games. He also has 29 catches for 236 yards and two touchdowns.

In two games against the Browns last year, he rushed for 281 yards and four touchdowns and had 123 receiving yards, giving him 404 total yards.

Rookie linebacker Sione Takitaki, a third-round pick out of BYU, played his first defensive snaps, replacing veteran Adarius Taylor as the strongside linebacker in the base defense. He had two tackles in 11 snaps.

“He did pretty good in the situations that he was in there,” Kitchens said. “He has been playing very well on special teams, and that earned him the chance to go out on defense.”

Safety Jermaine Whitehead, who was cut by the Browns on Nov. 4 after threatening social media posts, worked out for the Raiders, according to multiple reports.

** Hall of Fame safety Ed Reed and nine-time Pro Bowl defensive back Charles Woodson were in the Browns locker room after the game.