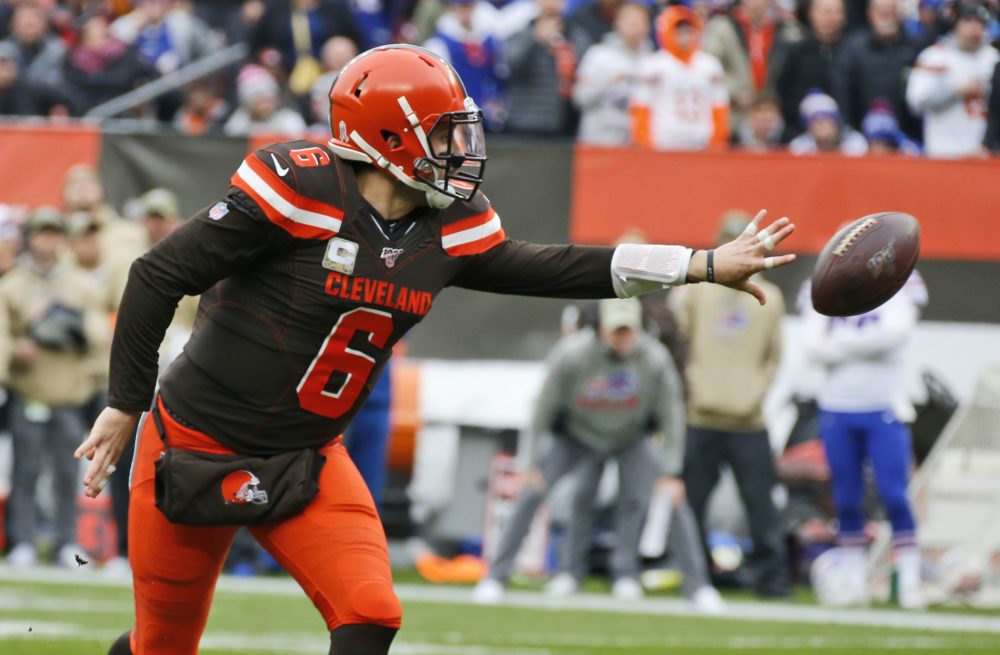 After their first win in 42 days, the Browns coaches savored the 19-16 triumph over the Bills … for about two hours.

The resilient and red-hot Pittsburgh Steelers are coming to town Thursday night for a date on national TV, so Freddie Kitchens and his staff were back watching film Sunday night.

“Just trying to get a plan together for Pittsburgh who, of course, is a huge division opponent,” Kitchens said Monday on a conference call. “Passion and energy will not be a problem. We have to prepare to control our emotions, stay in the moment and play the game and play the play.”

The season looked like a lost one for the Steelers when they started 0-3 and 1-4 and had watched Pro Bowl quarterback Ben Roethlisberger go down in Week 2 with a season-ending elbow injury. But they traded a first-round pick to the Dolphins for playmaking safety Minkah Fitzpatrick and went on a run.

The Steelers (5-4) have won four in a row to get into playoff position in the AFC, beating the Chargers, Dolphins, Colts and Rams. The defense has been the driving force with 14 takeaways during the streak, including four in a 17-12 win over the Rams on Sunday afternoon.

“They are one of the best defenses in the National Football League,” Kitchens said. “They have always been good on defense. They continue to hold that torch of playing good defense.

“They are sound. They know what they are doing. They are smart. They are tough. They are physical. There are not many weaknesses over there.”

The Browns (3-6) had lost four straight before beating the Bills with a drive led by Baker Mayfield in the last few minutes. They haven’t won two in a row this season but might need eight straight — or at least seven of eight — to have any chance of making the playoffs.

They’re four games back of the Ravens (7-2) in the AFC North, two behind the Steelers and trail 11 teams in the AFC, when six make the postseason.

The Browns have no hope of a miracle run without Mayfield playing better than he did for much of the season. He may have started a turnaround last week in the 24-19 loss to Denver.

In the last two games, he’s 53-for-80 for 511 yards with three touchdowns, four sacks, a 100.6 passer rating and no interceptions — after throwing at least one in the first seven games. Against the Bills he threw two touchdowns for the first time this season, including the 7-yard winner to Rashard Higgins with 1:44 left.

“He took care of the football,” Kitchens said. “He made good decisions on where to go with the ball. He was seeing the field well from the standpoint of his progressions, and the ball came out of his hands for the most part. A lot of that had to do with the receiving group was pretty precise on where they were supposed to be.”

“Very, very special ’cause that kid is great, man,” he said. “Every situation he gets in like that, he’s just going to keep learning from it and keep growing.

“I’m just happy for him and happy we got that game-winning drive and the game-winning stop. It just shows how the team is starting to jell together, and we’ve got a quick, quick week for Pittsburgh, man.”

The Browns scored touchdowns on two of four trips to the red zone, the pass to Higgins and a 17-yard pass to Jarvis Landry to open the game. The early success was obscured by the goal-line failures of the first half, when the offense had 11 snaps from the 3-yard line or closer and couldn’t get in the end zone.

Nick Chubb, who finished with 116 rushing yards on 20 carries, was stuffed six times. In the first-quarter goal-line stand, the Browns were the first NFL team in 26 years to run six plays from the 2-yard line or closer without scoring, according to Elias Sports Bureau.

“We have to do a better job of maintaining our blocks,” Kitchens said. “We were on the right people for the most part. We just have to win our one-on-one matchups a lot of times down there.

“When you get down in goal-to-go situations, you would like to be able to run the ball in. To do that, you have to win your one-on-one matchups.”

The Browns overcame the goal-line issues with the late 82-yard drive orchestrated by Mayfield. They were sunk in Denver by going 1-for-5 inside the red zone.

“This is just my personal belief — you are dealing with different types of scenarios when you are at the 1-yard line as opposed to the 12,” Kitchens said. “It is a lot more about being precise in landmarks, execution, timing and things like that when you are in red zone offense because the field diminishes. When you are down there at the 1, it is almost like being in a phone booth. It is more of a mentality thing.”

The Browns got a big boost Sunday from the debut of running back Kareem Hunt, who joined Nick Chubb in the backfield, but Kitchens only used them together for two snaps inside the 5. The package of goal-line plays practiced for the game didn’t include the tandem.

“Although, we could have gotten in normal offense down there. Our playbook is still open down there,” Kitchens said.

The corrections must be made quickly, with the Steelers’ 10th-ranked scoring defense (20.1 points per game) arriving before the players’ bodies have recovered.

“Thursday prime time, Pittsburgh. Hey, I don’t got to say much else,” Randall said.