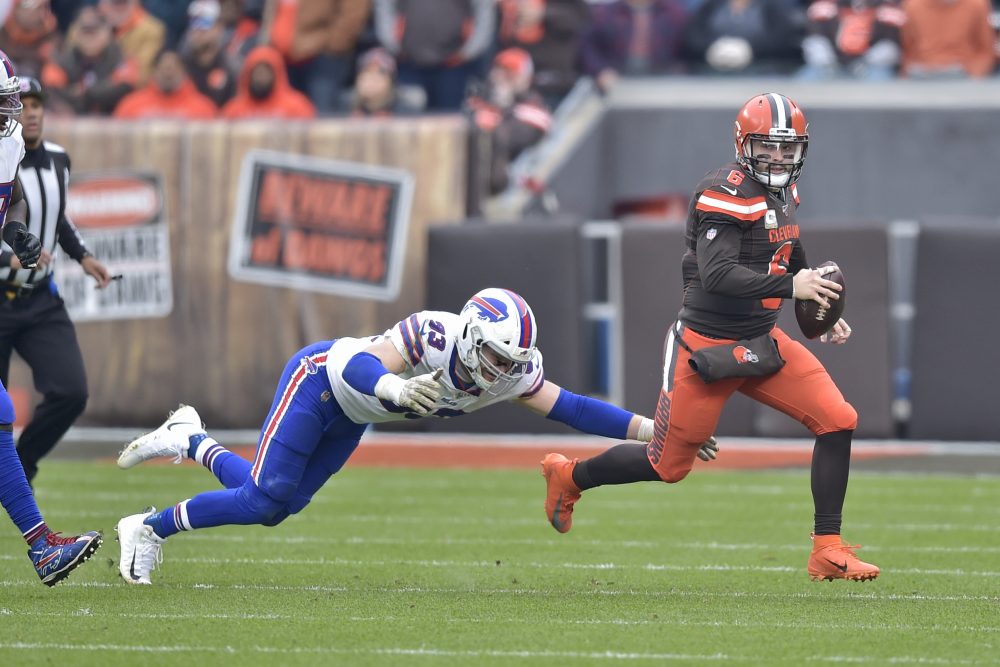 Mayfield never faced a defense like the Steelers’ in those Big 12 shootouts between Oklahoma and Oklahoma State.

“They are making a lot of plays right now,” he said Tuesday.

Mayfield was the No. 1 pick of the Browns out of Oklahoma in 2018. Rudolph went 75 picks later to the Steelers. They will renew their quarterback rivalry Thursday night on national TV.


Mayfield has had a disappointing second season as a starter, completing 59.9 percent with nine touchdowns, 12 interceptions and a 75.2 passer rating. Rudolph has been a pleasant surprise, helping save the Steelers’ season after Ben Roethlisberger went down with a season-ending elbow injury in Week 2.

“Mason is a great guy. He is playing well, taking care of the ball, putting them in a good position to win,” Mayfield said. “Obviously, they have rolled off four straight right now so he is doing his job.”

Rudolph has completed 64.5 percent with 11 touchdowns, four interceptions and a 93.0 passer rating. The numbers are solid and he’s been a steadying influence, but the defense has led Pittsburgh’s turnaround from an 0-3 start.

The Steelers have forced 14 turnovers in the winning streak, with safety Minkah Fitzpatrick returning two for touchdowns. He was acquired in a trade from the Dolphins on Sept. 17 and has five interceptions and a fumble recovery in seven games with Pittsburgh.

“He does a great job reading quarterbacks’ eyes,” Mayfield said. “There are some coverages and things they do that allow him to have some freedom to be the playmaker that he really is. He has put himself in good positions to win and create those turnovers, and then their pass rush has been a unit that has created some chaos up front so it allows them in the backend to play freely even more.”

The Steelers have 33 sacks, including four in each of the last three games, and 26 takeaways, which is second in the NFL. They’ve forced at least three turnovers in five straight games.

After an awful start, the Steelers have allowed 17.1 points a game over the last seven, tied for third in the NFL. During the span, they are tied for first in forced fumbles (12), first in passes defensed (49) and first in quarterback hits (60).

“It’s been impressive,” said left guard Joel Bitonio, who will spend much of the game blocking two-time Pro Bowler Cameron Heyward. “They are an opportunistic defense.”

Heyward is joined up front by T.J. Watt, who has 9.5 sacks and leads the league with 22 quarterback hits, and Bud Dupree, who has six sacks. Fitzpatrick and former Browns cornerback Joe Haden, who intercepted Mayfield in Pittsburgh’s win last year, lead the way in the secondary.

“I think they are kind of an attack-oriented defense where they just keep coming after you and are trying to make a play,” center JC Tretter said. “They do a good job of it. It is going to be a challenge in all aspects for the offensive line, for the skill positions and for Baker. We are going to have to play a complete game.”

The Steelers continue a stretch of strong defenses faced by the Browns (3-6). Mayfield has gone two straight games without an interception after throwing at least one in each of the first seven, and his season-high two touchdown passes Sunday beat the Bills.

“That is what happens when you play good defenses. You have to eliminate mistakes, eliminate turnovers and we have been able to do that over the past couple weeks,” he said. “Now it is just about making the plays when we need to.”

Ideally they would come from receiver Odell Beckham Jr., whose only touchdown was in Week 2 against the Jets. He had five catches for 57 yards against the Bills, but he and Mayfield couldn’t connect on a pair of deep passes down the right sideline. The first was overthrown and the second went off Beckham’s outstretched hand.

“We are very close,” Mayfield said. “You know those are game-changing plays if those hit. We have to keep teams honest.”

The winning 82-yard drive in the final minutes was the first for Mayfield this season. He made a brilliant 24-yard throw to Jarvis Landry as he was about to get hit and finished the drive with a 7-yard touchdown to Rashard Higgins.

The Browns hope the comeback can be a springboard for the rest of the season.

“We haven’t been worried about Baker. There’s been a lot of talk outside the building about Baker’s play, but I think we understand looking at it and understanding what’s going on that it’s on all of us,” Tretter said. “Getting Baker in rhythm, getting our run game in rhythm, that’s a team-wide, offensive-wide issue, and you can’t just put that on one guy’s shoulders.”

The last Bedlam game between Mayfield and Rudolph was a 62-52 Sooners victory in which Mayfield threw for 598 yards and five touchdowns and Rudolph 448 and five. According to ESPN, this will be the first time Oklahoma and Oklahoma State quarterbacks have started against each other in the NFL.

“It is interesting, especially because now it is division rivals, as well, not just from college,” Mayfield said. “So I am looking forward to it.”

Nick Chubb-Kareem Hunt package expected to expand, has potential to be “explosive,” change offense for stretch run
Browns realize magnitude of matchup with Steelers for playoff hopes — “Everything’s at stake” … “There’s no tomorrow”