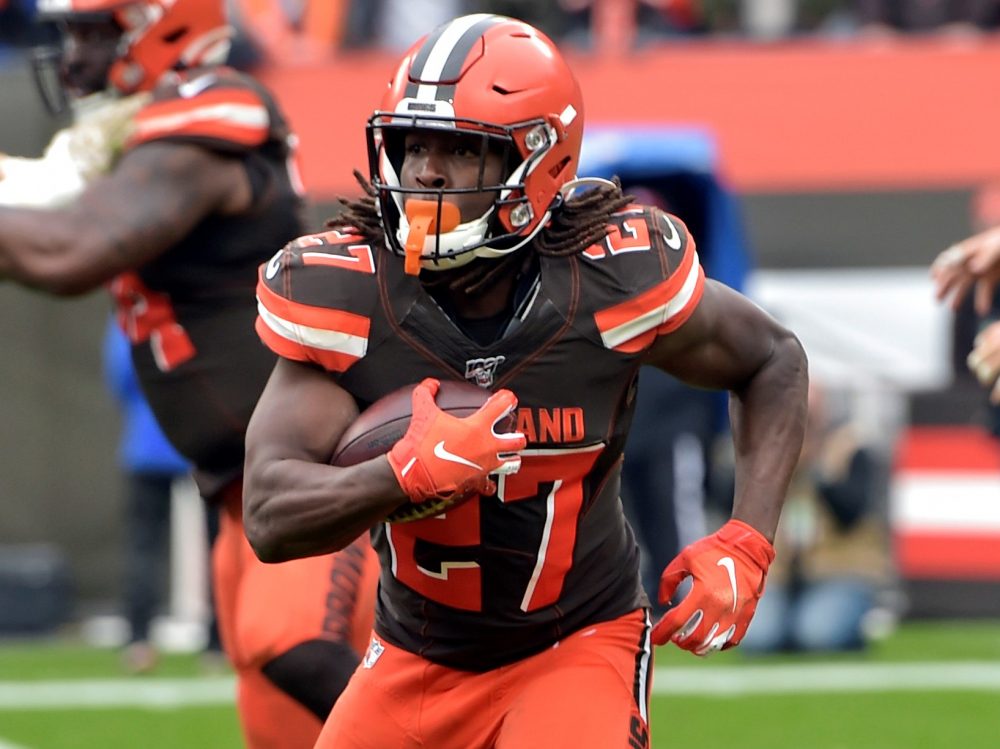 BEREA — Kareem Hunt’s debut with the Browns was a game-changer Sunday in the 19-16 win over the Bills.

His pairing with Nick Chubb in the backfield could be a season-changer.

“It can be an explosive package for us,” quarterback Baker Mayfield said Tuesday.

The offense still had its issues against Buffalo — the blocking on the goal line was a disaster, and Mayfield and receiver Odell Beckham Jr. still didn’t connect enough — but a two-headed running back monster can take pressure off everything else.

And create chaos for the defense.

“They don’t know who’s getting the ball and which way we’re going because we could both get it at any time,” Chubb said. “It just kind of confuses those guys on not really knowing where the ball will end up going.”

The victory over the Bills snapped a four-game losing streak and improved the Browns’ record to 3-6. They might have to win the final seven games to get into the postseason, and the dynamic duo of Chubb and Hunt could be the difference for the offense.

“I guarantee you they can,” right tackle Chris Hubbard said.

Chubb rushed 20 times for 116 yards, a 5.8 average, and caught two passes for 5 yards against the Bills. Hunt caught seven passes for 44 yards and carried four times for 30.

“Anytime you can get guys that can do things with the ball in their hands, and they also can play off of other people, that definitely impacts decisions, alignments, assignments, the way you get the ball to those guys changes,” coach Freddie Kitchens said. “When you have more than a couple of options, from that position in particular, it’s very good.”

Before Hunt could share in the glory, he experienced the grind.

On his first NFL snap in 356 days, he didn’t get a handoff or catch a pass. He made his way through the hole and helped clear a path for Chubb’s 21-yard carry with a seal block of safety Micah Hyde. He then hustled downfield to celebrate with Chubb.

“I just enjoy the game of football honestly,” Hunt said. “I was able to go put a hit on somebody. When I carry the ball, they are trying to do that to me so I am not carrying the ball and now I can go hit them.”

Hunt gets emotional, makes big impact in return to NFL

Chubb was excited to finally share a field with him.

“He brings a lot of energy, a lot of fire and he’s very intense,” he said. “It felt like we were just kids in the backyard playing with each other, so it was great.”

Hunt was the league’s leading rusher with 1,327 yards as a rookie with the Chiefs in 2017, so life as a lead blocker is new to him. It’s part of his job because Chubb’s established as the workhorse back (919 yards, third in the NFL) and Hunt is trying to rebuild a career after being cut by the Chiefs last year and opening this season on an eight-game suspension for a pair of off-field altercations.

“I just want to be known as a guy who can do it all,” he said. “It is just about heart and the love for the game that I have.

“I am a guy who takes everything personally out there. If I miss my block, I am going to be angry at myself for that. I just take it to heart each and every play and try to keep those guys off Nick.”

Hunt was already considered a natural as a runner and receiver, and blocking might have to be added to the list. He was the lead blocker on seven Chubb runs and they went for 87 yards, according to ESPN Stats & Info.

“I trusted him,” Chubb said. “I had the idea he’d be pretty good, and he’s very physical.

“That shows the type of person he is. The whole game plan was he was going to be mostly lead blocking for me, and he didn’t complain.”

Left guard Joel Bitonio saw the game plan, approached Hunt and jokingly asked if he was ready to play fullback and take on the middle linebacker.

“That’s something from my short time getting to know Kareem, that’s not something you ever have to worry about,” he said. “Whatever the team needs, he’ll do. He showed it.”

With two backs capable of getting the ball on a handoff or pass, Mayfield has a plethora of safe options. And if defenses shift their attention closer to the line of scrimmage, receivers Odell Beckham Jr. and Jarvis Landry will have more space to operate.

“We had so much success running the ball on Sunday that it is always the identity,” Mayfield said. “It is just a matter of how we are going to do it and however we want to attack teams. What it comes down to is being physical up front, us doing our job in the run game and establishing that early and often to where we can take our shots when we want to.”

The Thursday night game with the Steelers doesn’t allow for much practice time, but Cleveland’s coaches will likely expand the two-back package for the pivotal matchup.

“Both of those guys employed in the game at the same time is particularly challenging, and I’d imagine, as Hunt is more available to them, that package is going to continue to grow,” Steelers coach Mike Tomlin said.

“I feel like there is a lot more to go,” Hunt said.