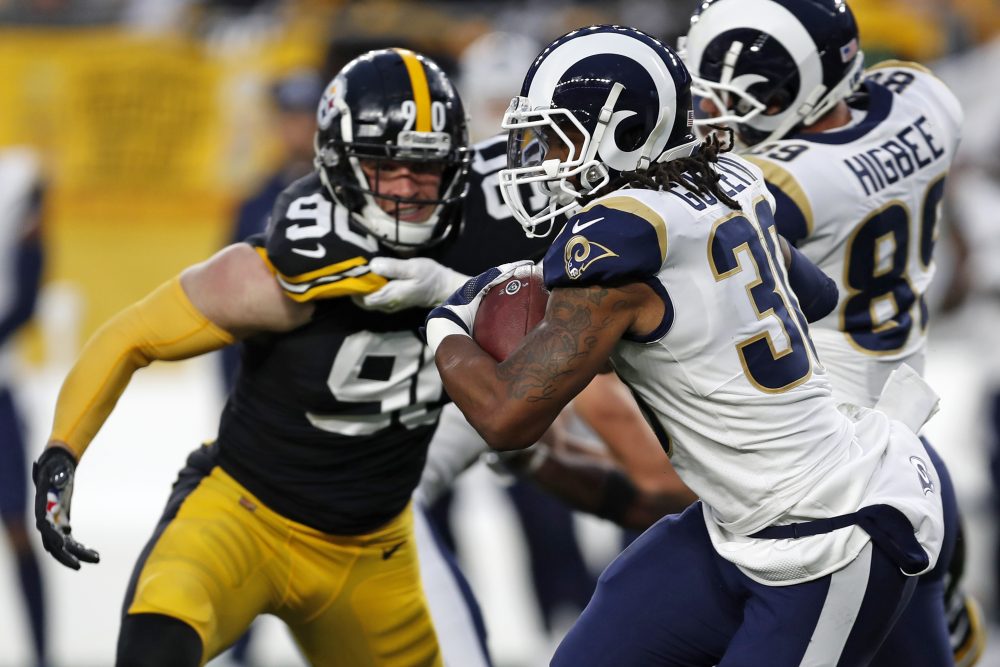 Steelers outside linebacker T.J. Watt is making quite a name for himself as he steps outside the shadow of big brother J.J. And if the Browns don’t account for T.J., he could wreck the game.

Watt has stuffed the stat sheet this season with 9.5 sacks, a league-high 22 quarterback hits, four forced fumbles, three fumble recoveries, an interception, three passes defensed and eight tackles for loss. He plays with great energy and seems to be his best in the biggest moments. He has seven sacks in four career games against the Browns, and his 11 forced fumbles are tied for the most in the NFL since he entered the league in 2017.

“He is one of those guys you have to know where he is,” quarterback Baker Mayfield said Tuesday. “They are doing some things to move him around, give him different looks and have him stand up in the box or on the edge. He just makes a lot of plays. He is a smart player, he has played ball for a while, he recognizes plays quickly and he is able to react.”

Right tackle Chris Hubbard, who was teammates with Watt in Pittsburgh in 2017, will have the primary responsibility of blocking Watt. Hubbard has struggled this year and knows he must be on top of his game for what he called probably his toughest matchup of the season.

“He’s one of those elusive dudes that uses his hands well,” Hubbard said. “He’s always playing at a high level. He’s a smart guy, too. He’s one of those guys you can’t slack on. You have to get your hands on him and take care of business after that.”

Bud Dupree, who has six sacks, will challenge left tackle Greg Robinson. But when coach Freddie Kitchens uses a tight end or running back to help, it’ll likely be on Hubbard’s side to slow down Watt.

“His ability to bend and turn the corner. His effort. His passion,” Kitchens said. “A very, very high motor. Just keeps coming and does not quit. He is a very special player.”

Running back Kareem Hunt’s return to the field sparked the offense in the 19-16 win over the Bills on Sunday. The dynamic pairing of Hunt with Nick Chubb has the potential to change the course of the Browns’ season, and may just be scratching the surface.

“I feel like there is a lot more to go,” Hunt said. “We have to build off that, get our bodies together and get ready to go back out there and compete hard again on Thursday night.”

Hunt rushed four times for 30 yards and had a much bigger impact as a receiver (seven catches, 44 yards) and lead blocker, with Chubb rushing 20 times for 116 yards.

“I just want to play football and touch the football however way possible — whatever to help the team,” Hunt said.

Chubb has bordered on dominant this season, ranking third in the NFL with 919 rushing yards. Hunt won a rushing title with the Chiefs in 2017, so his addition creates more than a distraction for defenses. It’s a dilemma.

“We kind of did some experiments on just how much we can do with that package,” Mayfield said. “Obviously two dynamic players with Nick and Kareem, we are able to do a lot. But kind of make it to where we format it where it all looks similar but we are doing different things out of it.”

Hunt got winded a couple of times against the Bills and asked out. His endurance should improve following his first game action in nearly a year, giving Kitchens more opportunities to get him on the field.

“I have a lot of respect for Hunt in what he has been able to do over the course of his career,” Steelers coach Mike Tomlin said. “We have had some awesome battles against him, but we better get focused on Nick Chubb and what he does as an essential ball carrier for those guys. What he has done this year has been really impressive.”

Browns cornerback TJ Carrie expects turnover margin to be the deciding factor in the game. If he’s right, the Browns must reverse the overwhelming trends of the season.

The Steelers have 24 takeaways since Week 3, best in the NFL. The Browns have forced only nine takeaways all season, including two over the last five games.

The other side of the coin isn’t much better. Mayfield has thrown 12 interceptions, though none in the last two weeks, while Pittsburgh’s Mason Rudolph has thrown four to 11 touchdowns.

“It goes beyond a point of emphasis,” Tomlin said of his defense’s obsession with turnovers. “Guys are trying to live it out day to day in their prep and establishing the habits and muscle memory that allows them to do it in game. The credit goes to those guys not only from a prep standpoint but from a production standpoint when given the opportunity in stadium.”

Safety Minkah Fitzpatrick has been the catalyst for the Steelers’ turnaround. Acquired Sept. 17 in a trade from Miami, he has five interceptions, a forced fumble, a fumble recovery and two touchdowns with Pittsburgh.

“Anytime you can add a playmaker on the backend, the ball just kind of finds him,” Kitchens said. “He is always in the right spot. He is great with his eyes. It is almost like he knows where the ball is going before it is going to be there. He does a good job of being where he is supposed to be and then being where he is not supposed to be when there is a play to be made.”

The turnovers start up front for the Steelers with Watt, Dupree and tackle Cameron Heyward applying the pressure. The Steelers are third with 33 sacks, so the quarterback can’t get comfortable or go through his full progression.

“They are getting home a lot and then the ball has to come out and then they are able to do their studying during the course of the week and know where the ball is coming out at,” Kitchens said.

Defensive coordinator Steve Wilks has been talking all season about generating more takeaways to help the offense, and the Browns have yet to score a defensive touchdown. Carrie said the solution is simple.

“Effort. To the ball, man,” he said. “Everybody running to the ball, strip attempts. You’re flying, you’re making the extra effort, you get a tip, someone else is running instead of loafing and jogging and they come back and catch that tip. Just coming out there and playing with a lot of effort and things will take care of themselves.”

Rudolph has been a season saver since Ben Roehlisberger went down in Week 2. He’s managed games, protected the ball and made enough plays for the defense to do its thing. He’s apparently immune to pressure, becoming the first quarterback in NFL history to get his first two wins on “Monday Night Football.”

Maybe that would change if Rudolph’s asked to lead a big second-half comeback. If the Browns can start fast and get a lead, they could put Rudolph and the Steelers in an uncomfortable spot. After all, he was a third-round pick in 2018, had never played before Week 2 and the Steelers are 0-4 when trailing after three quarters, 5-0 when they have the lead heading into the fourth.

“He’s handling everything like a true starter,” Carrie said. “Seems like he’s been playing in this league for a very, very long time the way he’s commanding the offense and limiting the turnovers. He does throw some great balls, he can make all the throws and he can put his offense in the best situations. So we have to try to frustrate him and flutter him a little bit to play to our advantage.”

The impact of Steelers running back James Conner would be reduced with a Browns lead. The defensive line would then have freedom to get after Rudolph, who isn’t much of a scrambler but has been sacked only nine times behind a sturdy offensive line. A double-digit lead in the second half changes that dynamic. Even the best lines wilt under nonstop pressure, and end Myles Garrett is due for a big game. He’s tied for third in the league with 10 sacks but has gone two games without one.

Steelers cornerback Joe Haden is coming off his best game of the season and will certainly be amped up to face his former team — assuming he plays. He was added to the injury report Wednesday with an illness and didn’t practice. He got his first interception of the season and added seven tackles, five passes defensed — deflecting one ball to Fitzpatrick for the game-sealing interception — and a forced fumble in the 17-12 win over the Rams.

“He looks good,” left guard Joel Bitonio said. “This last game was one of his better games he’s played in a little while. He’s made some big plays for ’em. He’s always had a good energy, I thought, too, the way he plays.”

Haden leads the Steelers with nine passes defensed, and the 129 in his career top the league since he entered in 2010 as the No. 7 pick of the Browns. He intercepted Mayfield last season in Pittsburgh during the Steelers’ 33-18 win in which Mayfield went 22-for-36 for 180 yards, two touchdowns, an interception and two sacks.

“Very instinctive. A guy that plays the ball well,” Mayfield said. “He got me once last year. When the ball is in the air, he makes a play on it. Have to be on time, put the ball in the right spot and trust our guys to make those plays.”

Haden, 30, was never the fastest cornerback and has slowed some with age, so he’s at his best playing off the receiver and reading the quarterback. He’s always liked to gamble and can be susceptible to the double move. The Browns will have a chance for big plays to Beckham Jr. and Jarvis Landry as long as the protection holds up.

Days before the next meeting with the Steelers, Dec. 1 in Pittsburgh

Browns 19, Bills 16: The breakdown — thumbs up, thumbs down, the matchups
Prediction: Browns 20, Steelers 16