Notes: Larry Ogunjobi says adrenaline will get him through Steelers game on short week after playing all but one snap against Bills 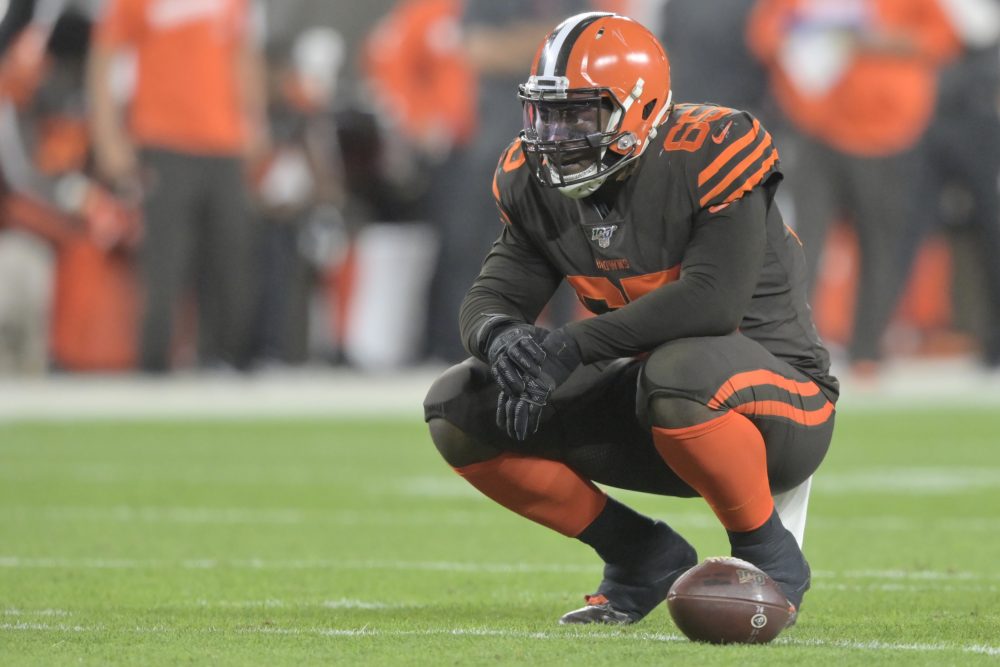 The quick turnaround to a Thursday night is hard on everyone. Maybe no one more than defensive tackle Larry Ogunjobi this week.

He played 68 of 69 defensive snaps Sunday against the Bills and will be back in the starting lineup four days later against the physical Steelers at FirstEnergy Stadium.

“I didn’t really notice until I came out for that one play,” he said Tuesday of never leaving the field.

The Bills picked up the first down with Ogunjobi on the sideline.

“So I was right back on the field,” he said.

Ogunjobi was “a little sore” Tuesday but not overly concerned about the physical pounding coming again two days later. He might be a special case after playing through a torn biceps last season.

“Adrenaline’s a crazy thing,” he said. “You’re hurting and you’re sore, but when the lights come on and you get that first bit of contact, it’s time to go, because you’re here.”

The battle to get ready without a full week is fought on two fronts: mental and physical.

“Really, short game like this is all mental, just being ready, because both teams are going to be hurting, we both played,” Ogunjobi said.

“The coaching staff does a really good job with preparing us mentally,” he said. “But it’s a physical game. You want to get your legs back, you want to get all the kinks back, you don’t have as much time to get it back. And so this is what it means to be a pro, what do you do to get your body back in a short week.”

Coach Freddie Kitchens was concerned that players being tired physically would affect them mentally.

Left guard Joel Bitonio said his body usually doesn’t start feeling better until the Wednesday after a Sunday game, but he still thought the challenge was greater mentally with less time to study and prepare.

“Once the game comes, I’m going to play regardless of how I feel,” he said. “But you’ve got to know how the game plan is going to work for you.”

Defensive end Olivier Vernon (knee) was ruled out and will miss his second straight game. Chad Thomas had a sack against the Bills in his first start and will fill in again.

“He had a great game, played his role very well,” Ogunjobi said. “And he’s just going to keep getting better.”

** Defensive back Eric Murray (knee) was also declared out, as expected.

Cornerback Joe Haden was listed as questionable after missing practice Wednesday with an illness.

Cox played for Avon while his dad, Bryan, a former NFL linebacker, was an assistant coach for the Browns from 2009-10. Cox finished high school in Florida and went to the University of Florida.

Cox was undrafted in 2017 and signed by Carolina. He’s played in 19 games with 17 tackles and a fumble recovery. He played in one game this year with the Panthers and was waived Friday.

With Vernon out for Thursday night, Cox could get playing time immediately. He took the roster spot of linebacker/special teamer Malik Jefferson, who was waived Tuesday.

Running back Kareem Hunt will make his playing debut in the Browns-Steelers rivalry but knows it well after growing up a Browns fan in Northeast Ohio.

He said it was big for him as a kid.

Hunt said he made sure to watch Browns-Steelers games in a different room from the Pittsburgh fans.

Steelers running back James Conner will play after missing two games with a shoulder injury.

“Very powerful. He’s going to fight through the tackle,” Thomas said. “I’ve been going against him since college. You’ve got to really bring him down. You’ve got to bring it to him.”

Conner, who made the Pro Bowl last year in his first season as a starter, has 97 rushes for 380 yards, four touchdowns and a 3.9 average in seven games. He also has 29 catches for 236 yards and two touchdowns.

In two games against the Browns last year, he rushed for 281 yards and four touchdowns and had 123 receiving yards.

The Browns are 27th against the run, allowing 134.9 yards a game. They held the Bills to 84 yards on 20 carries but have been up and down all year.