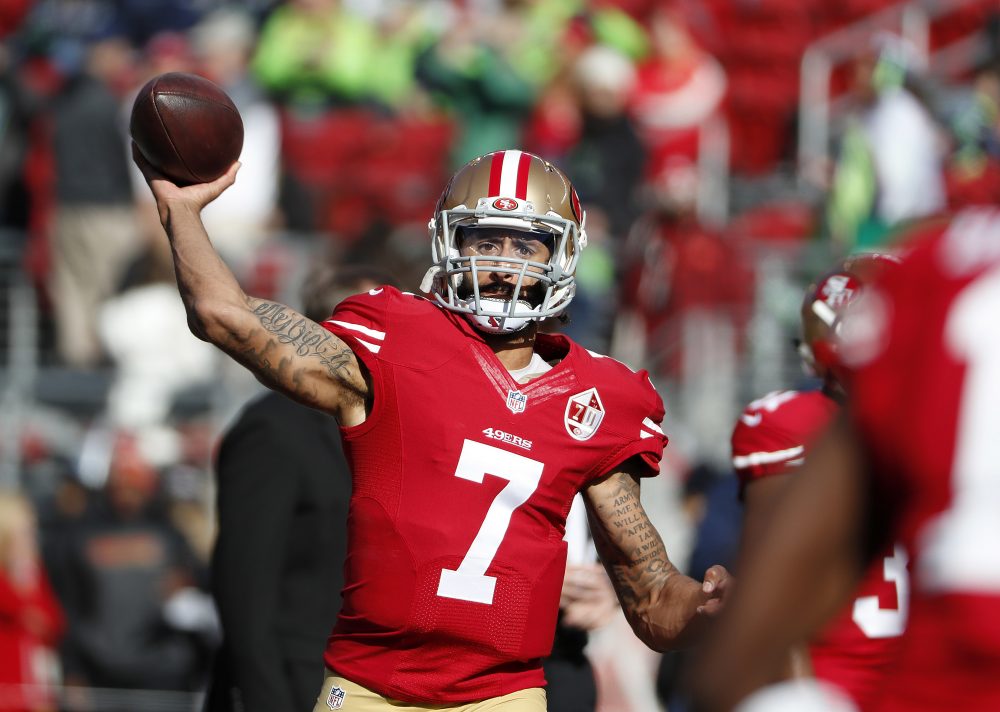 CLEVELAND — The Browns are willing to give controversial quarterback Colin Kaepernick a look.

Owner Dee Haslam said Thursday afternoon the Browns would send someone to Kaepernick’s workout scheduled by the NFL for Saturday in Atlanta. She didn’t know who specifically from the personnel department would attend but believed it would be an area scout.

“We are in support of anybody getting an opportunity to play football,” Haslam said. “We love that.”

Haslam spoke to a few reporters for a minute after helping Jim Rooney, son of former Steelers owner Dan Rooney, promote his new book at a forum of The City Club of Cleveland.

Kaepernick hasn’t played in the NFL since 2016 and reached a settlement in March on a collusion grievance he had filed against the league. He became a divisive figure when he kneeled during the national anthem in 2016 to protest oppression of people of color in the U.S.

Kaepernick was 28-30 as a starter in six years with the 49ers, taking them to the Super Bowl after the 2012 season. They lost to the Ravens.

The NFL said 11 teams have committed to attend the workout, which will be led by former Browns coach Hue Jackson.

“The NFL asked me to do it,” Jackson told ESPN. “I’m excited about doing it for Colin and the league.”

Arizona, Atlanta, Denver, Detroit, Miami, New England, the Giants, the Jets, Tampa Bay and Washington are the other teams scheduled to attend.

The Browns have Baker Mayfield, the No. 1 pick in 2018, as their starting quarterback and like Garrett Gilbert as the backup.

But Haslam believes Kaepernick, 32, could get another chance in the league.

“I think a team will definitely pick him up if he fits in with their team and he’s a good player,” she said during the forum.

Rookie offensive lineman Drew Forbes, a sixth-round pick out of Southeast Missouri State, was activated off injured reserve. The deadline to make the move was Thursday afternoon, 21 days after he returned to practice.

He was inactive for the game Thursday night against the Steelers.

Forbes took the roster spot of receiver Antonio Callaway, who was waived.

Forbes suffered a knee injury in the preseason finale and was placed on injured reserve Sept. 2. He played left tackle in college but has been practicing primarily in the interior.

Steelers cornerback Joe Haden was active and expected to start after being listed as questionable on the injury report with an illness. He missed practice Wednesday but wasn’t going to miss a chance to play his former team.

He got his first interception of the season Sunday in a win over the Rams and added seven tackles, five passes defensed and a forced fumble. He intercepted Mayfield during the Steelers’ win in Pittsburgh last season.

The Browns had no surprises among their inactives.

Tight end Ricky Seals-Jones (knee) was active after being listed as questionable. He missed the win over the Bills on Sunday after taking a direct shot to the knee Nov. 3 against the Broncos.

Chad Thomas was scheduled to start his second straight game in place of Vernon.

Running back Nick Chubb is the Browns’ nominee for the Art Rooney Sportsmanship Award. Each team chooses a nominee.

** Haslam is open to adding a 17th game to the schedule.

“I think that’s really interesting,” she said. “It’s a possibility. I wish we had more football.”

** She also thinks a franchise in London could work, saying travel logistics to the West Coast are also difficult.

Notes: Larry Ogunjobi says adrenaline will get him through Steelers game on short week after playing all but one snap against Bills
Notes: Joel Bitonio works to keep team together with speech in emotional locker room