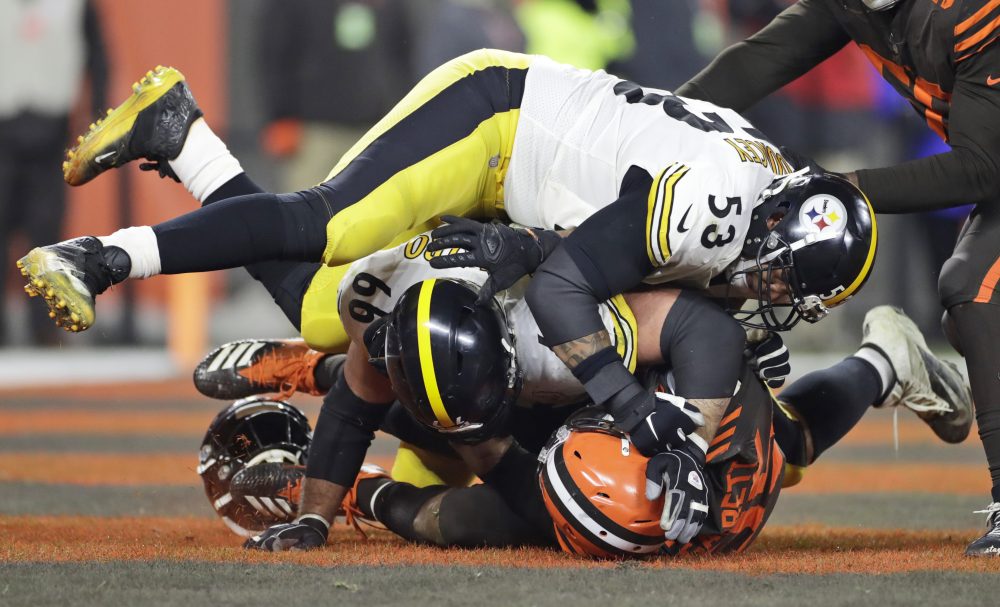 It ended with a wild helmet-swinging, head-kicking end zone brawl. It ended after two Steelers receivers were nearly knocked out, and three Browns players were thrown out of the game. It ended with both teams milling around the field, unsure if the game was over or not.

Oh, it was over, all right. Backup quarterback Garrett Gilbert took a knee, and the Browns-Steelers rivalry is alive and kicking — literally.

This feels like a potentially transformative but extremely costly win for the Browns. The transformation may have to be put on pause, because their best defensive player, Myles Garrett, will almost certainly be suspended by the NFL for one or more games for ripping the helmet off the head of Pittsburgh quarterback Mason Rudolph, and then clubbing Rudolph in the head with his own helmet.

That’s right, the Browns had more players thrown out of the game than the Steelers had touchdowns.

The end of a wildly physical and emotional game probably should have been expected. Especially given the plight of the underachieving Browns coming into the game.

Their season on life support, their coach flapping in the breeze, their uniforms as ugly as ever …

Desperation can be a great motivator, and Thursday night the still-penalty-prone but desperate Browns managed to put enough of the right pieces together at exactly the right time to revive their season, invigorate their fans and take some of the sheen off their turnpike neighbors, and some paint off the Steelers helmets — but at a terrible price.

And now the Browns have nine days to prepare for the 2-7 Dolphins.

The world seems right again in Dawg Pound Nation, where the hometown team has won two, count ’em, two games in a row, with the Miami punching bags waiting in the wings.

For the Browns, the Miami game may be the equivalent of going to a neutral corner for a week. After that, on Dec. 1, they head for Pittsburgh for Round 2 of the steel cage match with their AFC North rivals.

Bring your own mouthpiece.

Thursday night the Browns and Steelers gave a national television audience a taste of vintage leather-helmet, Canton Bulldogs-style football. It was a night of fearsome collisions, some of them legal.

Perhaps we should have known it would be that way, especially given what was at stake for the Browns — which was their season. A loss Thursday night and their record would have tumbled to 3-7, and it would be thanks for coming, drive safely on your way home time.

Instead, the Browns drew a line in the sand, and refused to allow the Steelers to cross it.

The proof: Three ejections, 121 yards in penalties and a brawl.

Is this the rap sheet of a team fighting for its season, or a team that is playing out of control?

“I’m embarrassed. It’s not good,” said Browns coach Freddie Kitchens, speaking not of the win but of the game-ending free-for-all. “That’s not who we are.”

It’s how they look, though, and it’s an awful look, and an awful ending for a team trying to show it’s better.

“It’s a shame we’ve got to answer questions about this after a huge win,” said an emotional Kitchens, who knows a game-ending street fight reflects poorly on his team, and on him as the head coach.

The Browns were eight seconds away from winning it without a brawl. Had they done that, the narrative would have been far different.

Now the Browns move forward with an even bigger reputation as the NFL’s most undisciplined team. They kept their season alive with the win, but they also kept alive their reputation as football outlaws.

“It feels like we lost. It’s going to take some time for us to realize we won,” said Baker Mayfield, who, lost in the fisticuffs, had one of his better games of the season, completing 17 of 32 passes for 193 yards, two touchdowns and no interceptions.

One of the completions came on the first play of the game. It was to guard Wyatt Teller, on a deflected pass.

That may have been the first indication that this wasn’t going to be just another run-of-the mill Browns game.

Lost in the brawl, as well, was that the Browns played well. They held the Steelers to one touchdown, and that came on a long drive that was aided by three Browns penalties.

Other than that, the Browns defense overwhelmed the Steelers offense, intercepting four passes by Rudolph, whose quarterback rating was a nearly invisible 36.3.

For the Browns it was a win AND a loss.

Win a game, lose their best defensive player and embarrass the organization.

With the Browns, it’s always something.

Prediction: Browns 20, Steelers 16
Browns 21, Steelers 7: The breakdown — thumbs up, thumbs down, the matchups