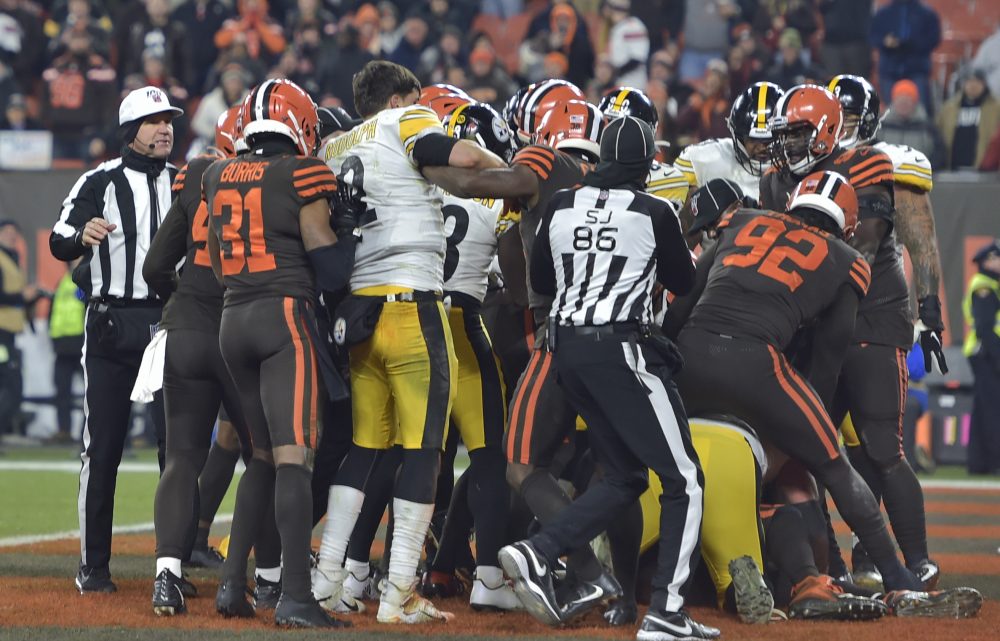 CLEVELAND — The Browns were eight seconds away from a big win built on a great defensive performance.

For 59:52, the defense played a near-perfect game, shutting down the Pittsburgh Steelers in a 21-7 victory at FirstEnergy Stadium on Thursday evening.

Those last eight seconds, though, could haunt them for the rest of the year.

Myles Garrett took Steelers quarterback Mason Rudolph to the ground and from there things escalated. The star defensive end ultimately ripped off Rudolph’s helmet and swung it at his face, connecting on the top of the head and igniting a brawl that left the No. 1 overall pick’s status for the coming weeks uncertain.

“What I did was foolish and I shouldn’t have allowed myself to slip like that,” Garrett said. “It was out of character. A situation like that where it’s an emotional game, I allowed myself to follow through on my emotions with the last play and what happened.”

Garrett and Larry Ogunjobi were ejected for their roles in the brawl. Pittsburgh center Maurkice Pouncey was also tossed.

Garrett will more than likely be suspended, and the question is for how long.

Former Titans defensive tackle Albert Haynesworth was suspended an NFL-record five games in 2006 for stomping on the face of Cowboys center Andre Gurode.

Former NFL vice president of officiating Mike Pereira, who’s an officiating analyst for Fox, expects Garrett to be suspended for four games, with the chance for an appeal to reduce the sentence.

“This goes beyond pretty much anything that I have seen,” he said in a video posted on Twitter.

Cleveland (4-6) faces Miami on Nov. 24 then heads to Pittsburgh for a rematch Dec. 1. Six games remain in the season.

“I saw my teammate getting jumped on and I went over there to try and help him,” said Ogunjobi, who knocked Rudolph to the ground after he and Garrett had separated. “I’m not a dirty player, I’m not trying to hurt nobody, I feel like if the shoe was on the other foot they would try to do the same thing.

“I apologize to Mason, I’m not trying to hurt nobody, but at the same time if somebody is my teammate, that’s my brother. I’ve been playing with (Garrett) for three years.”

Up until those last eight seconds, Cleveland was putting together arguably its best defensive performance of the season. Save for one drive, the Browns kept the Steelers offense locked down — limiting it to just 236 yards.

The Browns entered Thursday with the league’s 27th-ranked rush defense at 134.9 yards per game, but held Pittsburgh to 58 yards on 16 carries. Cleveland forced Rudolph into four interceptions, doubling its total through the first nine games, and sacked him four times.

Linebacker Joe Schobert doubled his career total with two interceptions, and he had never had more than one in a season. His second set up the game-icing touchdown when he beat receiver James Washington to a spot over the middle and took the pick to the 4-yard line.

“We were actually in the same coverage both times,” Schobert said of his interceptions. “The second one was a crossing route up and under. He was coming into my zone and I just dropped straight back. He tried to throw the dig in right behind me, I think he assumed I was going to keep going with the crossing route.”

Cleveland’s defense helped Pittsburgh on its only touchdown drive with three penalties totaling 58 yards. Free safety Damarious Randall was ejected for a hit on a defenseless receiver, knocking Diontae Johnson out of the game with a concussion.

The biggest penalty was on safety Juston Burris, who gave the Steelers new life with an illegal contact foul on third-and-6. On the next play, cornerback Greedy Williams was flagged for pass interference — a 38-yard penalty to the 3-yard line. The Steelers scored two plays later.

The other bit of bad news involved safety Morgan Burnett, who was responsible for the first interception when he returned a pass tipped by Denzel Ward 43 yards to the Steelers 30-yard line. Burnett left with an Achilles injury and did not return.