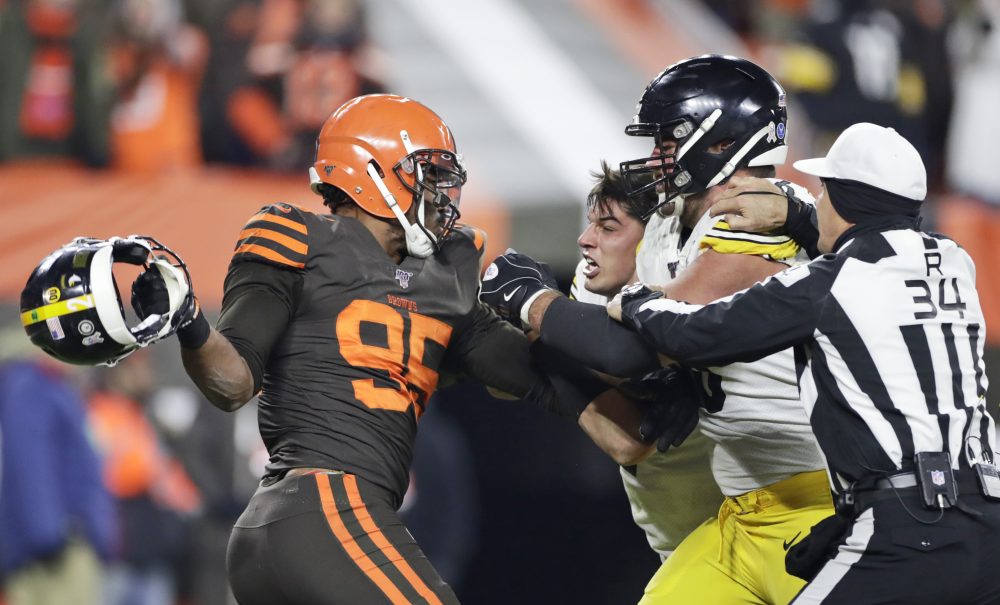 CLEVELAND — Defensive end Myles Garrett refused to kill bugs growing up because they were living creatures.

He didn’t retaliate when a fan punched him in the face last month while he was stopped in traffic.

He became the face of NFL brutality Thursday night.

Garrett was ejected after ripping the helmet off Steelers quarterback Mason Rudolph and clubbing him on top of the head with it on national TV. He faces a suspension from the league, and it could be for the final six games of the season.

“Very surprising,” linebacker Joe Schobert said after the 21-7 win over the Steelers. “Myles off the field and in the locker room, even on the field for the majority of time that I have known him, is a calm, centered guy. “Obviously this is an emotional game and people make mistakes but, yeah, it surprised me from Myles.”

While the Browns-Steelers rivalry has always been heated and has featured violent plays from the likes of Joe “Turkey” Jones and James Harrison, players from both teams said tensions hadn’t been bad Thursday night despite two Steelers receivers leaving the game with concussions after helmet-to-helmet hits from Browns defenders. Free safety Damarious Randall was ejected for one of them.

“It’s an emotional game played at a high intensity and I wouldn’t have any problems with anybody on their team before that,” Garrett said. “Just one play, one play got to me.”

Garrett took down Rudolph after he had thrown a pass on a play that started with 14 seconds left in the game. Rudolph took exception and tried to pull off Garrett’s helmet as they wrestled on the ground. Rudolph then pushed Garrett off of him with his right foot in Garrett’s groin.

Garrett removed Rudolph’s helmet instead, swung it and connected when Rudolph came after him. Browns defensive tackle Larry Ogunjobi shoved Rudolph to the ground, and Steelers center Maurkice Pouncey punched and kicked Garrett. Ogunjobi and Pouncey were also ejected and could face suspensions.

“I thought it was cowardly and bush league,” Rudolph said. “I got sacked, we exchanged some words, he kept keeping on and one thing led to another. You can go back and watch the tape if you want and make your own assumptions.”

Coach Freddie Kitchens didn’t care that Garrett may have been provoked.

“We do not react like that no matter what. That is not an excuse for anything that Myles did at all, and we are not giving him an excuse,” he said. “I do not even care what happened. We have five seconds to go in a game. That cannot happen.”

Rudolph, who suffered a concussion against the Ravens and missed a game earlier in the season, was asked where things crossed the line.

“Maybe when he took my helmet off and used it as a weapon,” he said before explaining why he kept going after Garrett even without a helmet. “I felt like I had a bone to pick with him after what he did. I wasn’t going to back down.”

Kitchens said Garrett apologized to him, and Garrett said he’ll address the entire team next time it’s together.

“I’m hurting the whole team with what I did and that could come back to bite us,” said Garrett, who entered the game tied for third in the NFL with 10 sacks. “I don’t know what kind of repercussions I’ll face, but got to be better.

“That is embarrassing. What I did was foolish and I shouldn’t have allowed myself to slip like that. That’s out of character, but a situation like that where it’s an emotional game and I allowed myself to fall into those emotions with that last play and what happened.”

Receiver Odell Beckham Jr., who riled up the crowd during the fight, was one of the teammates shocked by Garrett’s behavior.

“I wouldn’t expect it from Myles, but things happen, man,” he said. “It’s bad. It’s bad when I see Pouncey jump on and kick and punch. It’s just bad. It just is not a good look. I understand the rivalry. It’s just not a good look.

“It’s dumb. It’s going to hurt the team. He’s going to lose a game, maybe two. You never know, and it just overshadows the win that we had today.”

The players were aware of the stain the brawl left on Garrett and the league.

“You just can’t do it. There’s way to justify it,” Beckham said. “There’s no place in this game (for it). Multiple players are going to get suspended for both teams. It’s just not in this game of football.”

Quarterback Baker Mayfield is friends with Rudolph from their Oklahoma-Oklahoma State rivalry and was quick to say Garrett’s actions were “inexcusable.”

“Obviously stuff like that can be dangerous,” Mayfield said. “It is tough to see that knowing Mason.”

Pouncey believes Garrett should be suspended for the rest of the season.

“Absolutely. 100 percent,” he said. “We will see how serious the NFL is about their players.”

He said he won’t care if he gets suspended.

“My man Rudolph got hit in the head with a helmet,” Pouncey said. “So I will accept whatever penalty it is.”

Excellent defensive performance overshadowed by brawl in final seconds
Myles Garrett apologizes to teammates, Mason Rudolph, fans and NFL, then gets suspended for at least the rest of the season