Browns 21, Steelers 7: The breakdown — thumbs up, thumbs down, the matchups 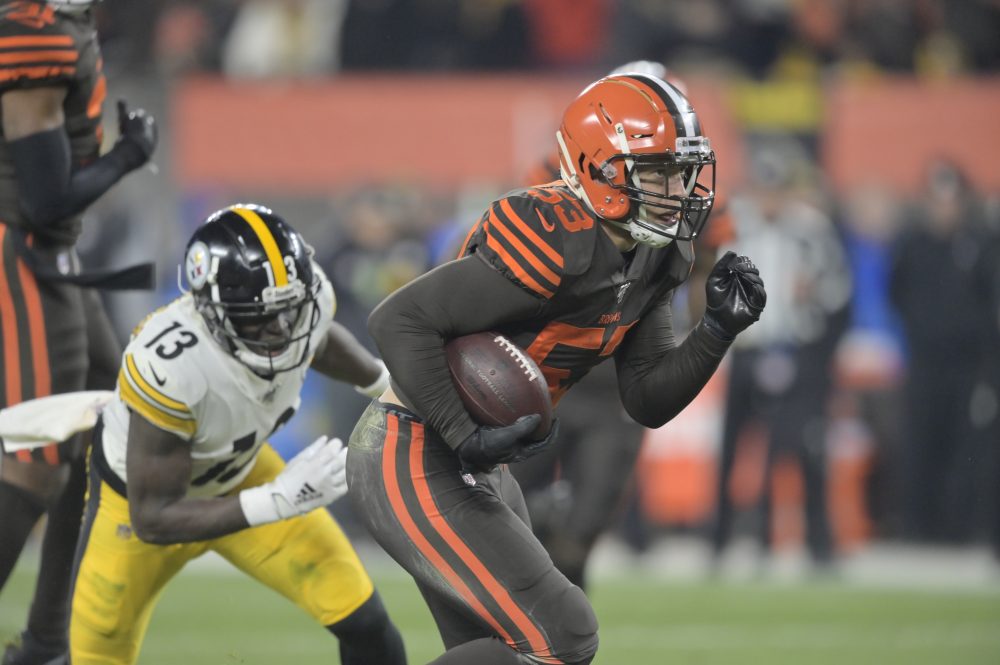 I always write this breakdown in the hours after a day game, or the day following a night game.

The disturbing brawl at the end of the Browns’ 21-7 win over the Steelers on Thursday night changed everything.

Defensive end Myles Garrett ripping off Steelers quarterback Mason Rudolph’s helmet then hitting him on top of the head with it overshadowed the outcome Thursday night. The NFL’s indefinite suspension of Garrett, which will run through at least the end of the season, occupied everyone’s attention Friday.

The fallout from the fight will continue throughout the season, but there’s finally time to look back at what happened on the field before the unfortunate series of events that drastically changed Garrett’s life forever, and the course of Cleveland’s season.

He looked like a guy determined to earn a Pro Bowl spot in one night. Or a big-money contract extension.

Maybe he was just playing for his soon-to-be baby. Schobert’s wife, Megan, made the joyful announcement after the game on Twitter, saying the baby’s due in the spring.

Whatever the motivation, Schobert was everywhere on the field as the defense dominated the Steelers, holding them to one penalty-fueled touchdown drive and 236 total yards. He had a game-high 10 tackles, two interceptions, a sack, a tackle for loss, two more passes defensed and another quarterback hit. The biggest plays were the interceptions, especially the second one he returned 20 yards to the 4 that provided the opportunity for the game-sealing touchdown in the fourth quarter. Until then, the offense had blown several chances to cement the victory.

“We were actually in the same coverage both times,” Schobert said of his picks. “I just dropped straight back and he tried to throw the dig in right behind me so I do not think he saw me or I think he assumed I would keep going with the crossing route.”

With the suspensions of Garrett and defensive tackle Larry Ogunjobi (one game) and season-long injuries across the secondary, Schobert is the biggest constant on defense. The Browns will need him to be a steadying force and playmaker if they have any hope of making a playoff run down the stretch.

He’d already shown he deserved serious consideration to make the Pro Bowl for the second time in three years. He entered this week tied for fifth in the NFL with 82 tackles.

He had this locked up before his regrettable actions in the final seconds.

The Browns let the Steelers hang around all day, and Rudolph was entirely incapable of taking advantage. He was 23-for-44 for 221 yards, a touchdown, four interceptions, four sacks and a 36.3 passer rating. I know he lost receivers JuJu Smith-Schuster and Diontae Johnson to concussions and running back James Conner to a shoulder injury, but Rudolph had chances to make plays and couldn’t. By the fourth quarter, the Steelers coaches decided their only chance was to call go routes and have him throw it up in hopes of a lucky catch or pass interference penalty.

“We had shots and we pushed the ball down the field but didn’t connect sometimes,” Rudolph said. “Obviously turning the ball over four times does not help so that’s on me. We had guys in the right spot. I just have to put the ball there.”

His dismal play was lost in the brutality of the final seconds, where he also failed miserably. He co-starred with Garrett and earned lifelong status as enemy of Browns fans. None of this removes responsibility from Garrett, but Rudolph has to own his actions. He avoided suspension but reportedly will be fined by the NFL.

He didn’t appreciate Garrett taking him to the ground after he had thrown a pass, so Rudolph tried to pull off Garrett’s helmet. When that didn’t work, he tried to push Garrett off with his foot that was located in Garrett’s groin area. Finally, after Garrett had ripped off Rudolph’s helmet, Steelers guard David DeCastro was walking Garrett away when Rudolph charged at Garrett. That’s when the unacceptable helmet smash happened.

The Browns had been grinding their gears on offense for more than two quarters, allowing Pittsburgh to hang in the game. They had wasted numerous opportunities to expand the lead but were given a golden one when Schobert returned an interception to the 4-yard line with 6:22 left and the score 14-7.

An incomplete pass for Odell Beckham Jr. and a 4-yard loss on a Nick Chubb run left the Browns with third down at the 8. A field goal probably would’ve been enough to put the game out of reach, but Baker Mayfield wanted more. As he did all night, he bought time inside and outside the pocket, looking comfortable and composed. Then he set his feet, saw Carlson in the back middle of the end zone and fired a dart with linebacker Mark Barron’s back to the quarterback. Carlson jumped, reached over Barron and caught the ball next to his helmet. Carlson was undrafted out of Princeton and spent the first seven games on the practice squad.

“Our tight end made an unbelievable catch in the end zone,” coach Freddie Kitchens said, lamenting that it would get lost in the fallout from the brawl.

The Browns’ record inside the AFC North — a franchise first

Season in which the Browns beat Baltimore and Pittsburgh — this one. They won 40-25 at Baltimore in Week 4.

“It feels like we lost. It is going to take time for us to realize that we just won this game, even though it is very obvious on the scoreboard. But that is the tough part.” — Browns quarterback Baker Mayfield

Baker Mayfield played one of his best games of the year, Nick Chubb worked hard for 92 yards to eclipse 1,000 for the year and Kareem Hunt converted two early third downs with catches. The deep ball also returned to the offense, with Odell Beckham Jr. and KhaDarel Hodge making 40-yard grabs.

Mason Rudolph was awful, and Pittsburgh never looked like a real threat.

The Browns got four interceptions after only four in the first nine games and controlled the action all night. Middle linebacker Joe Schobert was everywhere, as was strong safety Morgan Burnett before his Achilles tendon tore before halftime. Two concussion-causing helmet-to-helmet hits are two too many.

The Steelers were repeatedly put in difficult spots by their offense but kept it a game deep into the fourth quarter. T.J. Watt had a sack, another quarterback hit and a pass defensed but didn’t wreck the game.

Austin Seibert missed his first two field goals of the year and is still adjusting to kicking into the Dawg Pound. Jamie Gillan launched a couple of missiles and landed four punts inside the 20-yard line but also had three touchbacks.

Freddie Kitchens may not deserve one but he certainly can’t catch a break. His team was ready to play and got a huge win, but the good was lost in the brawl. A coach is ultimately responsible for his players’ actions, and Kitchens’ guys have played undisciplined all season.

Mike Tomlin dropped to 20-4-1 against the Browns, and his players also lost control at the end.

Commentary: Huge win proves costly, as Browns lose Myles Garrett and embarrass themselves on national TV
Commentary: Freddie Kitchens responsible for Browns being out of control