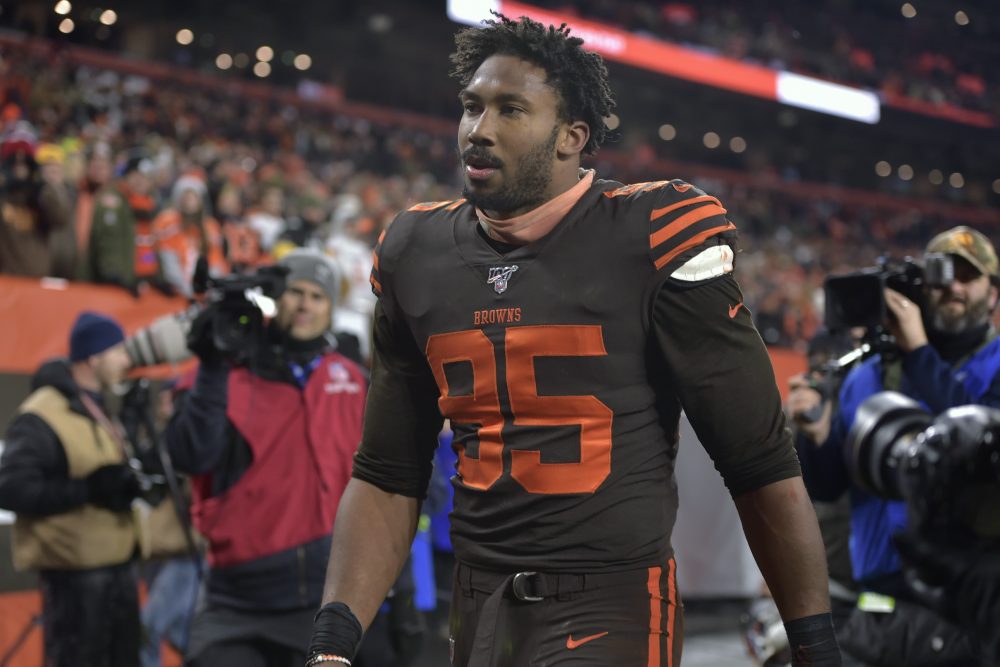 ESPN reported Sunday that both would be heard by Tuesday, with rulings expected  by Wednesday morning.

Garrett was suspended indefinitely Friday by the NFL. The suspension covers the final six games of the regular season and a potential playoff trip, and he’ll have to meet with the commissioner’s office before being reinstated.

Part of Garrett’s appeal will be that the collective bargaining agreement doesn’t include the mention of an “indefinite” suspension for on-field conduct, according to multiple reports.

Garrett, a Pro Bowl defensive end, ripped the helmet off Steelers quarterback Mason Rudolph with eight seconds left Thursday night in Cleveland’s 21-7 win and hit him on top of the head with it.

“That’s not us,” Vincent said. “That’s not who we are. There is no place for that in our game. We all know that.

“That, frankly, is an easy decision to suspend the player for the duration of the season … Imagine if he hit him with the crown of the helmet? We cannot have that on a football field.”

The bottom of the helmet hit the top of Ruldoph’s head, and he was fine.

Ogunjobi was suspended for one game — next week against the Dolphins — for coming from behind and shoving Rudolph to the ground after his run-in with Garrett had concluded.

Steelers center Maurkice Pouncey was suspended three games for punching and kicking Garrett while he was on the ground.

An appeal can be upheld, reduced or vacated, according to the CBA. It can’t be increased.

League officers Derrick Brooks and James Thrash, who are former players, will hear the appeals. They were jointly appointed by the NFL and players union and have reduced suspensions in the past, including for former Bengals linebacker Vontaze Burfict and former Broncos cornerback Aqib Talib.

Thrash will hear Ogunjobi’s appeal, and Brooks will hear Pouncey’s on Tuesday.

Garrett, who will forfeit $1.14 million in salary if he misses the rest of the season, will also be fined an undisclosed amount.

The NFL said he violated the unnecessary roughness and unsportsmanlike conduct rules, as well as fighting and removing an opponent’s helmet and using it as a weapon. He’s not permitted to be around the team during the suspension.

“Last night, I made a terrible mistake,” Garrett said in a statement. “I lost my cool and what I did was selfish and unacceptable. I know that we are all responsible for our actions and I can only prove my true character through my actions moving forward.

Garrett’s use of the helmet as a weapon is rarely seen in the NFL, and the suspension was the longest in NFL history for a single on-field incident. The violent outburst transcended sports.

It was a topic on the morning shows and evening news Friday, and Garrett was included in the opening skit of “Saturday Night Live.” Kenan Thompson wore a Garrett No. 95 jersey and held a Steelers helmet as he appeared at the impeachment hearings. He said he’d been pardoned by President Trump, then hit the actress playing Rudy Guliani over the head with the helmet.

In addition to the appeals, Vincent said the league office still has a lot of work to do regarding the brawl, with “another wave of fines coming.” The league will use video to determine who played what role in the fight, and who ran in from the sidelines.

A large group of Steelers entered the fray, while it appeared only a couple of Browns left the sideline. Coach Freddie Kitchens said Friday he was proud of the restraint showed by his players on the bench.

Rudolph avoided suspension despite trying to pull off Garrett’s helmet, trying to push him off with his foot in Garrett’s groin and chasing after him once they’d been separated. Rudolph will be fined for grabbing the face mask, Vincent said, and perhaps other offenses.

“There could be multiple fines coming to him if we find another action that constitutes unsportsmanlike conduct,” he said.

Vincent said Pouncey and Ogunjobi chose to escalate the brawl, as opposed to players like Pittsburgh guard David DeCastro, who tried to calm the situation.

“It’s about the choice the player made,” Vincent said of Pouncey. “It’s about the action itself. What did he do and what could he have done? He made multiple attempts to strike at and potentially injure another player.”

Ogunjobi went after Rudolph despite him being away from the action.

“This is an individual who, in our view, was going out of his way to escalate this situation,” Vincent said. “This is an action that could start another melee. It is a potential re-escalation.”

The NFL fined the Browns and Steelers $250,000 apiece because the action went beyond a normal altercation. The organizations apologized.

“We informed the teams that this is a shared action, and there is responsibility on all sides,” Vincent said. “You have to approach this with the entire organization, and not just individual players when you see an egregious situation like this.”