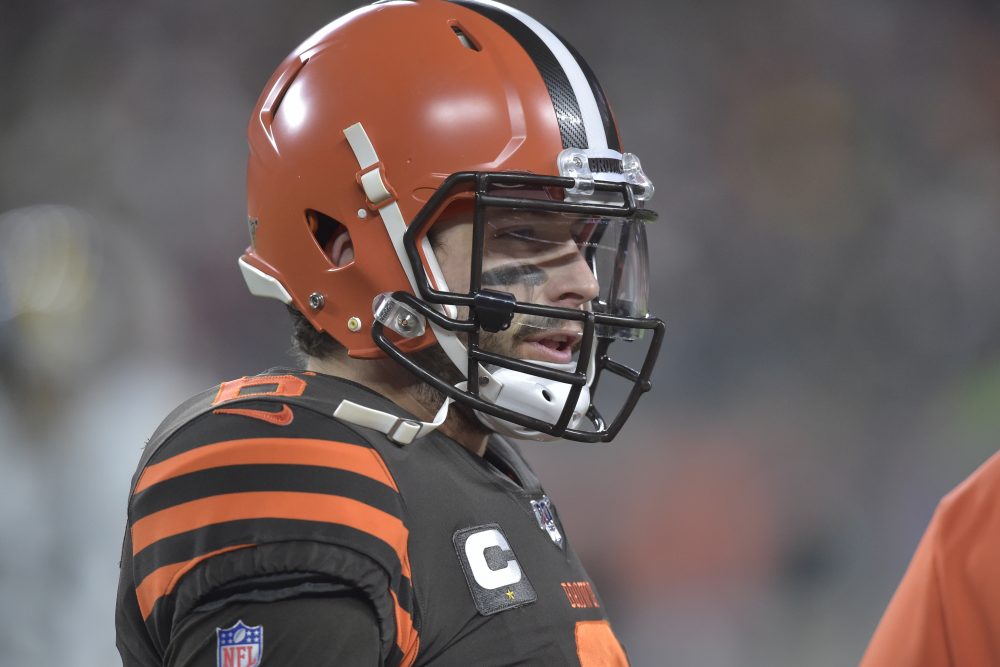 BEREA — Baker Mayfield has been vindicated.

Mayfield’s $12,500 fine for criticizing the officiating during a loss to the Seahawks was overturned on appeal, a league source confirmed to The Chronicle-Telegram on Monday.

ESPN’s Jake Trotter was first to report the news.

“I will probably get fined for saying this, but it was pretty bad today,” Mayfield said. “The guy is squared up with him, running at him and he is lowering his head into Jarvis. What is (Landry) supposed to do? Avoid him? This is not bullfighting. I don’t know. It ticks me off.”

Landry wasn’t fined for the penalty, which replays showed was not a blindside block. Landry was facing the correct direction and didn’t initiate contact.

Despite the evidence, Mayfield was fined for calling out the officials. During the appeal the comment was deemed to not merit a fine.

Mayfield didn’t back down after the fine was initially handed down.

“I knew I was going to get fined, but it needs to be said,” he said. “People have to be held accountable for their job. When it affects my job, it sucks because it’s not in my control.”

“I wouldn’t say it’s complaining when it was blatantly obvious. I’d say that’s just stating facts. Freedom of speech, I thought that’s OK, but I get fined for it.”

Mayfield wasn’t done, mentioning the season-long issues with the officiating.

“That’s the league. That’s what they do. They fine you for some ridiculous things,” he said. “That’s just how it is. There’s a reason everybody’s talking about it. It’s not just me. It goes for every team.”

Mayfield doubles down on criticism of officiating after fine

Middle linebacker Joe Schobert said his agent has had discussions with the Browns about a contract extension but a deal isn’t imminent.

“No. Not yet. At least that’s not what I’ve been told or not what I heard,” he told The Chronicle-Telegram.

Schobert, who’s in the final year of his rookie deal, wants to stay and wants to get the extension taken care of.

But he’s trying not to worry about a potential deal.

“I’ll let (my agent) handle all that stuff and I just focus in when I’m around playing football, doing my best of my abilities,” he said. “No matter what happens if I just do my job I know things are going to work out in the end.”

Schobert, a fourth-round pick out of Wisconsin in 2016, had one of his best games Thursday night in the 21-7 win over the Steelers. He had a game-high 10 tackles, two interceptions, two more passes defensed, a sack and another tackle for loss.

“I think it is going to be very close,” he said. “We just have to play it by the end of the week and see where he is.”

** Tight end David Njoku (broken wrist) is expected to return to practice Wednesday. He was hurt Sept. 16 against the Jets.

Njoku is eligible to come off injured reserve and play Sunday, but Kitchens wants to see him practice before making a decision.

“I would like to see where he is at conditioning, physically and mentally,” he said. “There are a lot of things that go into that.”

“Not much has changed on him,” Kitchens said. “We will wait and see.”

Veteran safety Morgan Burnett will miss the rest of the season after tearing an Achilles tendon Thursday night. The Browns haven’t placed him on IR yet.

“Big loss. Been in this league a long time, savvy veteran, knows the system in and out, leadership,” cornerback TJ Carrie said. “He has just so many capabilities that you can’t replace, and so from that standpoint, we are going to have to have a younger guy or some of the guys that we have been playing, they are going to have to step up and play big and this is the opportunity that they have been given.”

Without Burnett and Murray, free safety Damarious Randall will likely be joined by Juston Burris and rookie Sheldrick Redwine in the three-safety package against the Dolphins. Carrie was hoping to avoid being asked to help out at safety but might be needed in a pinch. Cornerback Terrance Mitchell is another option.

The highly anticipated rematch with the Steelers on Dec. 1 in Pittsburgh has been flexed out of the 4:25 p.m. time slot.

The league announced the Browns will move to 1 o’clock, with Oakland at Kansas City moving from 1 p.m. to 4:25 p.m. Both games are on CBS.

The Browns’ 21-7 victory over Pittsburgh was marred by an end-of-game brawl and featured four ejections.

Notes: Joel Bitonio works to keep team together with speech in emotional locker room
Notes: Coach Mike Tomlin dismisses Steelers’ role in brawl — “I don’t know that we did anything to make it happen”