Browns return to practice field, try to refocus amid fallout from brawl with Steelers 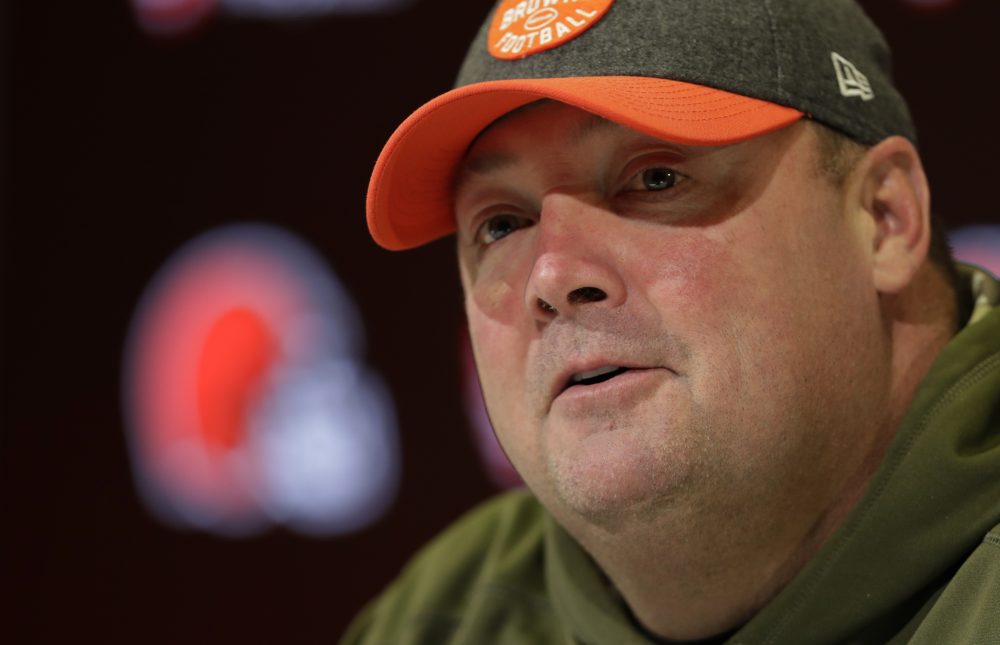 BEREA — The Browns tried to turn the page Monday.

After three days of fallout from the end-of-game brawl in which defensive end Myles Garrett hit Steelers quarterback Mason Rudolph over the head with Rudolph’s helmet, the Browns returned to the practice field. The ugly incident was the talk of the sports world throughout the weekend and lingered into the workweek.

“I wouldn’t say a cloud, but it definitely made us realize that all our goals are ahead of us, and they can be taken away like that,” cornerback TJ Carrie said.

Coach Freddie Kitchens attempted to shift the focus back to football. It’s not easy, especially with Garrett indefinitely suspended and defensive tackle Larry Ogunjobi suspended for Sunday’s game against the Dolphins for knocking Rudolph to the ground during the fight.

“Everybody outside the locker room, everybody who doesn’t experience what we experience through practice and workouts and meetings is going to have their own narrative and it’s not going to be a true narrative because they don’t understand what goes on in here,” middle linebacker Joe Schobert said, relaying Kitchens’ message. “So we just have to take these events, accept the consequences but move on and bring it tighter as a team because of it.”

The Browns have won two in a row for the first time this year to get to 4-6 and reach the fringe of the playoff race. They might need to extend the winning streak to eight to have a shot at the postseason.

They better regain their focus in a hurry.

“The league goes on, everything continues to move,” receiver Jarvis Landry said. “It was an unfortunate situation, but we’re here now, today’s Monday and we got to move on.

“We’re a tight group. I think we’ve been trying to pull it together for a couple weeks now. We’ve strung together a couple wins and we’ve just got to keep moving with that momentum.”

Practice looked normal, although the defensive line was severely short-handed without Garrett, Ogunjobi and end Olivier Vernon, who’s missed the last two games with a knee injury but may be able to return this week. But the locker room interviews were dominated by discussion of Garrett and life without him, rather than the 21-17 win over the Steelers on Thursday night.

Kitchens wanted his players to concentrate on the Dolphins.

“‘Let’s not stay in this too long and allow this to affect more days ahead of us,’” Carrie said of the coach’s message. “‘We can’t change it at this point. All we can do is grow from it and learn from it and understand that everything is right in front of us, but it can be taken away like that.’”

Kitchens was confident his guys could do that.

“We have a resilient bunch of guys,” he said. “They have accepted the challenge every week. It seems like it has been something different (every week). That is the way football seasons are, though.

“When you kind of become talked about, things come to the forefront more often.”

In addition to the violence at the end, defensive backs Damarious Randall and Greedy Williams had helmet-to-helmet hits that knocked Steelers receivers JuJu Smith-Schuster and Diontae Johnson from the game with concussions. Randall was ejected, and Carrie was asked if the Browns are getting a reputation for being dirty.

“I’m pretty sure there’s already a reputation that we have, right?” he said. “I think it’s not really our job to continue to worry about the outside noise. It’s our job to always go on the field and protect one another as brothers, go out there and play within the rules. Sometimes, it can be hard from that standpoint, but they have us here for a reason, and I think that’s the biggest reason.”

Garrett’s tied for fourth in the league with 10 sacks and considered himself a Defensive Player of the Year candidate. Without him drawing double teams, opponents can approach the defense differently.

“We’re going to miss Myles for sure,” Schobert said. “A player of that caliber doesn’t come around very often, but I think Freddie’s done a good job getting on top of it.”

“There is really no time to waste,” Carrie said.

Landry’s confidence level that the Browns can rally to reach the playoffs hasn’t dipped.

Browns realize magnitude of matchup with Steelers for playoff hopes — “Everything’s at stake” … “There’s no tomorrow”
Baker Mayfield, Kareem Hunt try to help Myles Garrett get through difficult time by relating their experiences