Mailbag: Will Browns be favorites rest of way? What’s plan at defensive end? Is Sheldrick Redwine ready for bigger role? 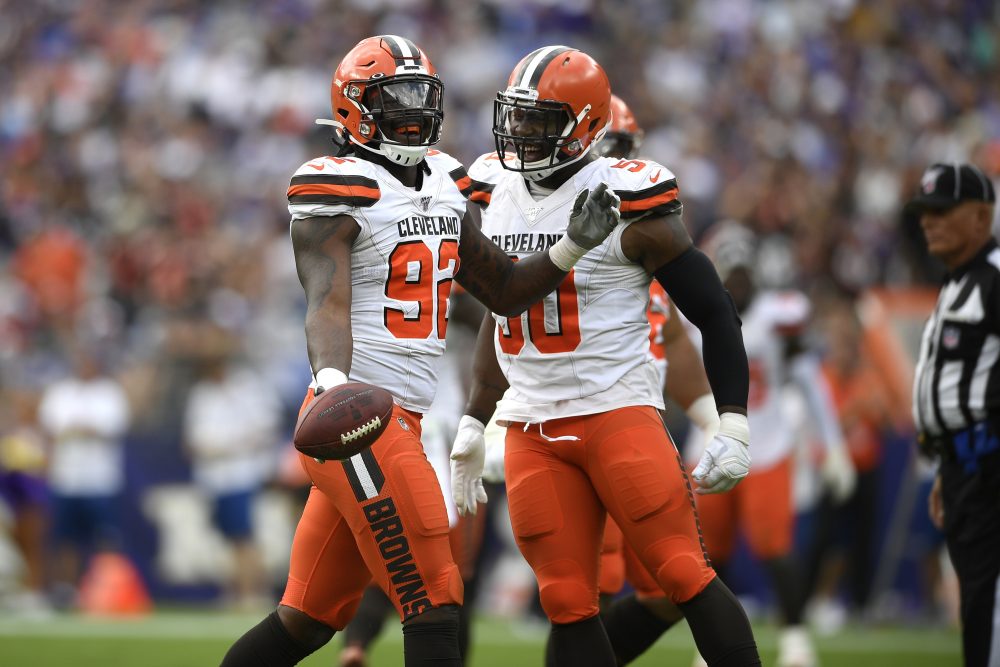 Q: Looking ahead, do you expect the Browns to be favored in the remainder of their games, with the possible exception of the Ravens game?

A: I know everyone, including me, has talked about how the second-half schedule is so much easier. But there are still hurdles that must be cleared.

I expect the Browns to be small underdogs at Pittsburgh on Dec. 1, at Arizona on Dec. 15 and Dec. 22 at home against the Ravens. Obviously this could change by the time the games arrive, but I don’t think Las Vegas has bought into the Browns yet. The spread in the rematch with the Steelers will be interesting. The Browns dominated on Thursday night, but I think Pittsburgh will be a slight favorite given home-field advantage and the revenge factor following the brawl.

Q: Who are the starting defensive ends? Can we get Genard Avery, Carl Nassib and Emmanuel Ogbah back? lol

A: Ideally Olivier Vernon will be able to start Sunday against the Dolphins after missing two games with a knee injury, but coach Freddie Kitchens was noncommittal Friday. If Vernon can play, it will be he and Chad Thomas as the starters. If Vernon remains out, I’d expect Thomas and Chris Smith to get the call.

Tackle Sheldon Richardson is also an option at end. With Vernon out, he’s gotten some reps on the outside, and the Browns have more depth at tackle than end right now.

As for the departed trio you mentioned, they’d all look good in brown and orange right now. And the team’s current circumstances put general manager John Dorsey’s decisions at end back in the spotlight.

I never thought Nassib was special and didn’t mind when he was cut before last season. But he had 6.5 sacks last year with the Buccaneers and has three in eight starts this year. He certainly could’ve been a third or fourth end for the Browns.

The trade of Avery last month to the Eagles remains a head-scratcher. He was so promising as a rookie last year, only to get buried on the bench this season. He’s undersized to be an every-down end but adds value as a pass rusher.

As for Ogbah, Dorsey thought he was expendable after trading for Vernon and dealt him for safety Eric Murray, who played a large role before missing the last three games following minor knee surgery. Ogbah was always a starting-caliber player but hadn’t been a difference-maker. He had 5.5 sacks in 10 games for the Chiefs before suffering a torn pectoral muscle.

Q: Is rookie safety Sheldrick Redwine ready to step up?

A: We’re going to find out.

How’s that for an answer, my favorite English vlogger/podcaster?

The truth is, it’s impossible to know for sure. The rookie fourth-round pick had played only eight defensive snaps until being forced into action Thursday night with 33 snaps against the Steelers. He only played because Damarious Randall was ejected, Morgan Burnett’s Achilles tore, Eric Murray remained out with a knee injury and Jermaine Whitehead had been cut after threatening people on social media. Redwine played alongside Juston Burris.

Randall will be back against the Dolphins, but Burnett’s done for the season and Murray’s a question mark. With coordinator Steve Wilks’ preference for three-safety packages, Redwine will get the chance to prove he’s ready.

Q: The two main arguments for hiring Freddie Kitchens were his play calling and his relationship with Baker Mayfield. The play calling has been arguably the team’s greatest weakness and Baker has clearly regressed. How can the Browns justify keeping Freddie another season?

A: The Haslams and GM John Dorsey will certainly have a decision to make, especially if the Browns don’t go on a run over the final six games.

Mayfield has played better the last three weeks — no interceptions — and is starting to look like the player he was as a rookie, but there’s no doubt he wasn’t the same player for the first half of the season. And the play calling remains a problem despite the two straight wins.

But to me, the decision is much bigger. Kitchens shouldn’t have been hired just for those reasons. The coach’s job is all-encompassing. He must set the tone for the organization, lead and inspire the players and have them prepared for the games. Kitchens has fallen short in these categories, as well.

Having said all that, he’s a first-time head coach still finding his way. How he handles the last six weeks could determine his future.

Q: How does the appeal work? Does Myles Garrett have a player rep doing the talking or is it him making the case? Don’t know how CBA has it spelled out.

A: He will have representation. I’m sure he’ll have a lawyer to present his case, as well as someone from the players union. I assume whether the player talks is on a case-by-case basis.

A: If his social media accounts can be trusted, yes. He posted “Activation” on Sunday, so I expect to see him at practice today. He’s eligible to play this Sunday if his broken wrist has healed sufficiently.

(Update: He didn’t practice Monday. But he probably feels like he’s getting close.)

Q: Throughout the years, it has seemed rare that roster adjustments have occurred beyond Fridays. Is there a deadline hour by which teams are encouraged, if not expected, to finalize rosters for that Sunday’s game?

A: Any additions must be made by Saturday at 4 p.m.

Mailbag: Are GM John Dorsey and coaching staff on same page? Can an offensive overhaul happen in a week? Does the organization overvalue potential?
Mailbag: Where does all the fine money go? Why is kicking into the Dawg Pound so tough? Have special teams been better than offense and defense?