Sheldon Richardson believes Mason Rudolph should’ve been suspended for a game: You can’t antagonize a fight and then claim bully after getting what’s coming to you 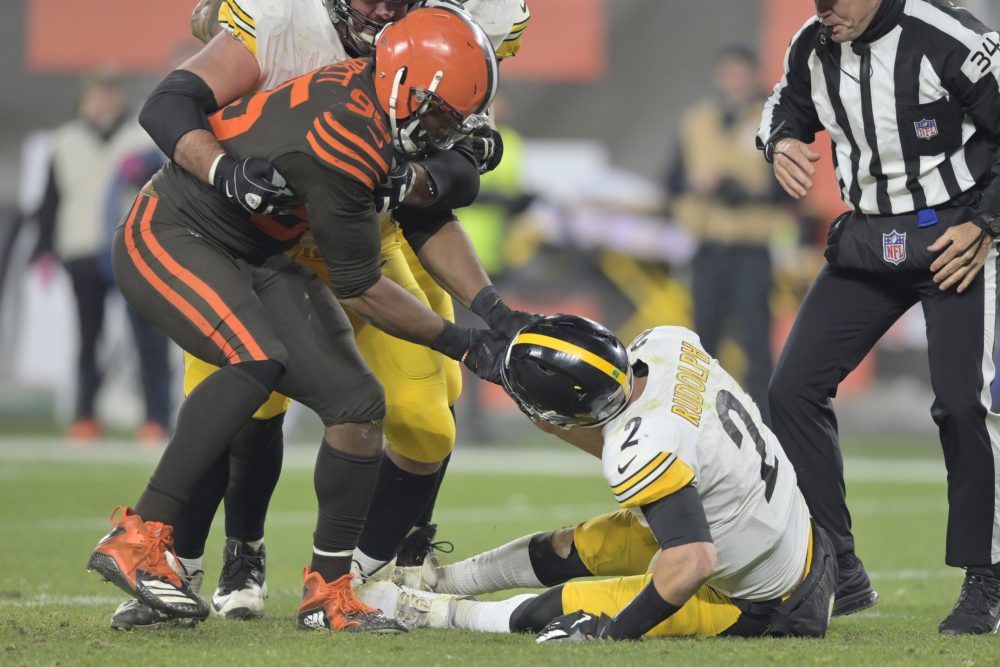 BEREA — Sheldon Richardson has strong opinions on the punishments handed down by the NFL following the Browns-Steelers brawl Thursday night.

He believes Myles Garrett should be allowed to play again this season and his indefinite suspension should be reduced on appeal.

“Hopefully he comes back before the season’s over with,” Richardson, a defensive tackle, said Monday. “I’m optimistic about that no matter how these guys in the media want to take things out of proportion. Myles did overreact a little bit, but he also was antagonized to do so.”

Richardson considers Steelers quarterback Mason Rudolph the antagonist and was adamant he should have a suspension to appeal. He was “very surprised” Rudolph wasn’t suspended.

“It’s on camera what he’s doing. There’s no hiding it no matter what he says in the media. It is what it is,” Richardson said. “You can’t antagonize a fight and then claim bully after getting what’s coming to you.

Garrett’s appeal will be heard Wednesday morning in New York, the league said. Garrett plans to appear at the meeting, according to multiple reports.

A ruling is generally issued within a day of the appeal.

Defensive tackle Larry Ogunjobi had his appeal hearing Monday. He was suspended one game for knocking Rudolph to the ground from behind after Rudolph’s altercation with Garrett.

Steelers center Maurkice Pouncey was suspended three games for punching and kicking Garrett while he was on the ground. Pouncey’s appeal hearing is scheduled for Tuesday.

Browns return to practice, try to refocus after fallout from brawl

Garrett, the Pro Bowl defensive end, was suspended indefinitely by the NFL on Friday for hitting Rudolph on top of the head with Rudolph’s helmet with eight seconds left in the Browns’ 21-7 win.

The league stated Garrett must miss the final six games of the regular season and the playoffs if the Browns were to qualify, and would have to meet with the commissioner’s office before he could be reinstated.

“He will probably meet with us some time in the offseason, and I think we’ll make a judgment on does he have remorse?” commissioner Roger Goodell said Friday on the Pre-Flight Playbook podcast with Gary Myers. “Does he understand why it’s not acceptable? Do we understand what he’s going to do to make sure it doesn’t happen again? Those are the things that are going to be very important for us.”

The ruling of the appeals officer could change that, but Goodell felt strongly about the need for an unprecedented suspension.

“There’s no place for that in the game,” he said. “It was in my view, and I think our football people, something that had to be dealt with very quickly and very firmly to make it clear to the players that it’s not acceptable, and to the clubs.”

Middle linebacker Joe Schobert was asked if the indefinite suspension was too harsh.

“Just based on things that have happened in the past I feel like the league’s trying to set an example with him and I don’t know if it’s fair or not,” he said.

Richardson was the lone starter remaining on the defensive line during practice Monday as the Browns began preparing for Sunday’s game vs. the Dolphins. Garrett and Ogunjobi are suspended, and end Olivier Vernon hasn’t returned from a knee injury that’s kept him out of the last two games.

Richardson explained why he thinks Garrett’s suspension should be reduced.

“Of course, he was defending himself. If a guy’s scratching at your face, what are you going to do?” he said. “The helmet was overboard. Let’s get that clear. But I don’t blame him for defending himself at all.

“Guy keeps rushing him even with a helmet off and he’s asking for it, so I’ll just leave it at that.”

The brawl started after Rudolph threw a short pass and Garrett then took him to the ground. Rudolph tried to pull off Garrett’s helmet and tried to push him off with a foot that was in Garrett’s groin.

Garrett succeeded in yanking off Rudolph’s helmet and they were separated, but Rudolph charged Garrett. That’s when Garrett swung the helmet and connected.

Richardson would’ve suspended Rudolph for a game. Instead, he’s expected to be fined for his role.

“Make it sound like you just can’t be a quarterback and do as you please in this league,” Richardson said. “Have some type of consequences for your actions, as well.”

He doesn’t blame Pouncey for protecting his quarterback.

“I’d go overboard for my guys, too,” Richardson said. “So nobody’s knocking him for that. That’s what football is.”

Baker Mayfield called Garrett’s actions “inexcusable” in the minutes following the game, and coach Freddie Kitchens said he was “embarrassed” and it was “totally unacceptable.” When asked Monday if Garrett was provoked, Kitchens said “everybody here saw the tape.”

“There is no excuse for that to happen on a football field,” he said of Garrett’s helmet club. “I know that, Myles knows that and all of the players in the locker room know that.

Richardson has been suspended twice — four games in 2015 for violating the NFL’s substance abuse policy and one game in 2016 for violating the personal conduct policy — and knows how difficult it can be to be forced to stay away from the team. He said Garrett is dealing with it but is mad he let down the team.

“Make sure he’s headstrong. It’s going to be tough watching us play in these weeks coming up because he’s supposed to be out there,” Richardson said. “I know that feeling. You can almost consider it loneliness. Surround himself with good people, his family. Just cheer us on from a distance. He’s still got our numbers.”

Schobert spoke to Garrett on Friday after he apologized to the team.

“I talked to him and let him know we have his back and know what kind of person he is,” he said. “Obviously you can’t let this define you for your career. He has a long time in the NFL ahead of him. I’m confident he’s going to turn the ship around.”