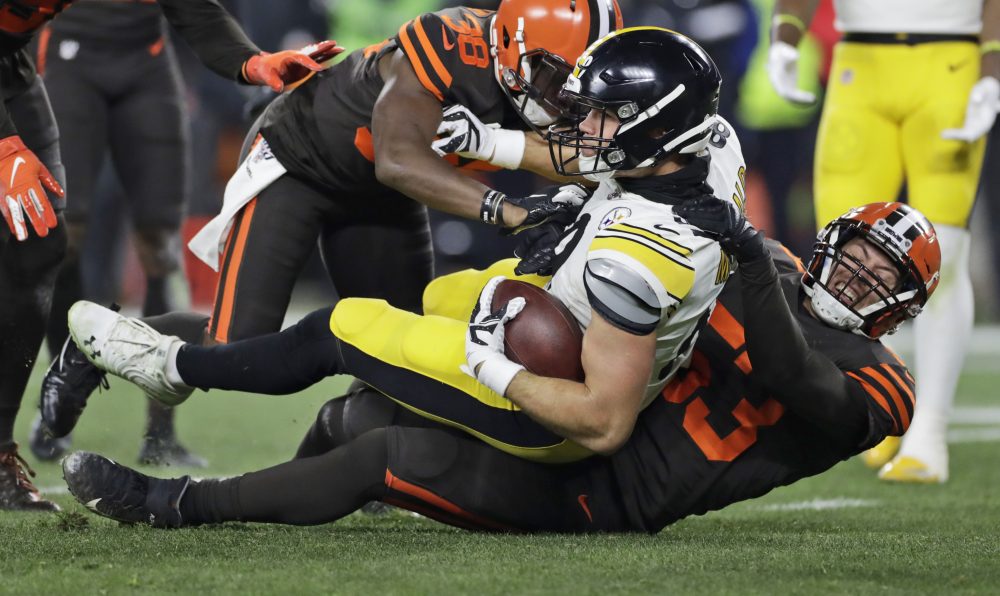 In the pandemonium of early Friday morning, Joe Schobert calmly walked out of FirstEnergy Stadium carrying a football destined for the growing collection at his home.

“I always steal the balls,” the middle linebacker told The Chronicle-Telegram on Monday. “I try to get all the logos. They have the other teams’ logos on it, so I always take it and then I have a big pile at my house.”

Schobert earned the souvenir with two interceptions in the 21-7 win over the Steelers. He only takes home balls he got on picks, forced fumbles or fumble recoveries.

With that cleared up, it’s time to discuss what else Schobert’s earned. And it’s way more valuable than a $100 ball.

Schobert deserves a contract extension from the Browns. He should get it as quickly as the language can be finalized, and it should be for four years and at least $55 million, which would put him in the top five of inside linebackers in the NFL for average salary.

Those two sentences would’ve seemed as crazy as the final eight seconds Thursday night if they’d been written during Schobert’s rookie season in 2016.

He was drafted out of Wisconsin in the fourth round by then-head of football operations Sashi Brown to play outside linebacker in a 3-4 scheme. He was undersized, miscast and barely made a ripple in 16 games, including four starts.

Only after he was moved to the middle the next year in Gregg Williams’ 4-3 scheme did he look like a legitimate NFL player.

That’s a vast understatement. Schobert was second in the NFL with 142 tackles in 2017 and made the Pro Bowl.

The stat-stuffing performance Thursday of a game-high 10 tackles, two interceptions, two more passes defensed, a sack and another tackle for loss looked like an audition for a return trip to the Pro Bowl. In the bright lights — and before the game was overshadowed by the ugly brawl — he played like one of the league’s elite.

He was trying to make a statement.

“You get prime-time games a couple times a year and you want to play very well in those games because that’s when the majority of the country’s watching,” Schobert said. “Because you can play amazing in a 1 o’clock game and your local media market knows it but it might not get out to too many other people.

“Yeah, it definitely felt good. I know who I am and what I can do. Just to put it on the field and be able to perform in prime time was cool.”

Entering season filled with uncertainty, Schobert determined to re-establish himself as Pro Bowler

Schobert ranks fifth in the league with 92 tackles and has played every defensive snap after his 2018 season was interrupted and sidetracked by a hamstring injury. He belongs in the Pro Bowl for the second time in three years, and that should be more than enough to get an extension from the Browns. He said his agent has had discussions with the organization but a deal wasn’t imminent.

Schobert’s the type of player upon which this often-dysfunctional organization should be built. He shows up, does his job, does it well and doesn’t create distractions. He’s in the right place at the right time on the field and helps everyone else do their jobs better.

That’s what impressed coach Freddie Kitchens against the Steelers, even more than the production.

“Above all else, he did an excellent job of getting guys where they were supposed to be to enable them to make plays also,” he said.

Dorsey, who could use a win after a rough couple of weeks, will have difficult decisions to make in the next couple of years about how to invest his salary cap dollars. He shouldn’t hesitate to commit to Schobert.

As the man in the middle of the defense and the play caller, he wouldn’t be easy to replace. Yes, Dorsey drafted rookie Sione Takitaki in the third round as a middle linebacker, but it’d be a huge gamble to assume he’d play anywhere near the level Schobert’s reached consistently.

Dorsey made a commitment to center JC Tretter — a three-year, $32.5 million extension Nov. 8 — because he valued his performance, reliability and intelligence. All those qualities apply to Schobert, an admitted nerd who loves Harry Potter and wants to keep Northeast Ohio as his home away from Wisconsin.

This could be his only chance to sign a contract worth life-changing money, so he’s naturally anxious about the uncertainty, especially after his wife, Megan, announced on Twitter that “Baby Scho” is coming in the spring.

“Obviously when I’m at home thinking about my future, talking to the wife, not knowing where we’re going to be living in the spring, it definitely is at the front of your mind to sign an extension so you get long-term security locked up, you know where you’re going to be, you can start planning things again,” Schobert said. “Especially this offseason because we’ve got some important things going on.”