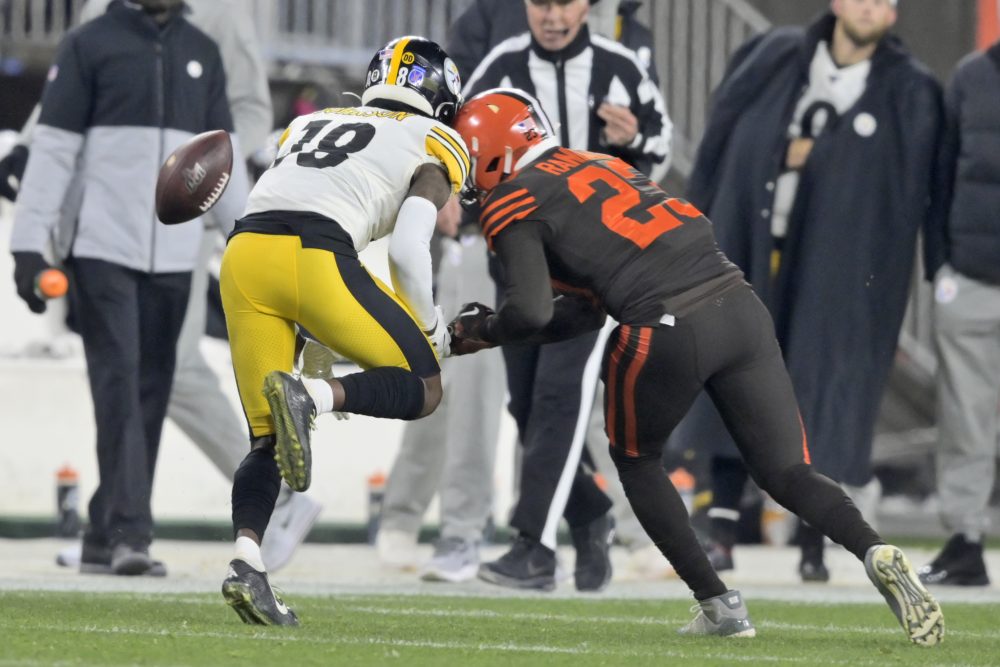 Johnson sustained a concussion and had blood coming out of his ear Thursday night during the Browns’ 21-7 win over the Steelers. Randall quickly apologized.

“I talked to him after the game and definitely apologized to him, but that is definitely not what I intended to do,” Randall said.

Randall contacted Johnson on Instagram and said things are good between them. Johnson was a full participant in practice Wednesday.

Randall was ejected for the hit that happened in front of the Steelers sideline in the third quarter. He wasn’t suspended but will almost certainly be fined.

“I really don’t know the rules about the ejections but I know one of the key components to it is intentionally hitting somebody like that and that wasn’t nowhere near intentional,” he said. “I’m running full speed from the middle of the field, so I don’t even think I could have done that even if I tried to, honestly. Definitely my first time ever getting ejected in my life, really first time ever getting a personal flag.”

Randall put the crown of his helmet into the side of Johnson’s helmet after the pass fell incomplete but said he didn’t know it was helmet to helmet until he saw a replay.

“Honestly, I thought I had a pretty good angle at his shoulder pads because I thought he was going to catch it and try to keep going,” Randall said. “I guess when the ball went through his hands as I was coming, he just kind of stopped suddenly and that’s when my angle got off track and it’s kind of hard to stop when you’re running that fast.”

Randall told Cleveland.com he received death threats on social media and was bothered by them. He was also shaken by the severity of Johnson’s injury.

“It stuck with me for a couple days, definitely, because it makes you think,” he said. “Football is that crazy, the sport that we play, you can be messed up in a blink of an eye, so I try to keep things in God’s hands and stay prayed up.”

Steelers quarterback Mason Rudolph read from a statement then answered a few questions in Pittsburgh about his role in the end-of-game brawl with defensive end Myles Garrett.

“Should have done a better job of keeping my cool in that situation,” he said. “The way I saw it, on the final play of the game with the game in hand the way it was, it had been, we had already lost two of our players to targeting penalties from the game. As I released the ball, I took a late shot. Did not agree with way he took me to the ground and my natural reaction was to get him from off on top of me. And again, I should have done a better job of handling that situation.”

Rudolph said he “definitely didn’t say anything that escalated it” and explained the attempt to yank off the helmet of Garrett, which preceded Garrett ripping off Rudolph’s helmet and hitting him on the head with it.

“I was just trying to get him from off on top of me,” Rudolph said.

Garrett apologized to teammates, Rudolph, the NFL and fans in a statement Friday.

“I have no ill will toward Myles Garrett, great respect for his ability as a player and I know if Myles could go back he would handle the situation differently,” Rudolph said. “As for my involvement last week, there is no acceptable excuse. The bottom line is I should have done a better job keeping my composure in that situation. It falls short of what I believe it means to be a Pittsburgh Steeler and a member of the NFL.”

Baker Mayfield is friends with Rudolph from their college rivalry but said he wanted to let things die down before he reached out.

Defensive end Olivier Vernon (knee) didn’t practice Wednesday, but coach Freddie Kitchens wasn’t ready to rule him out for the Dolphins game. Vernon has missed the last two games and would be a big help to the line with Garrett facing an indefinite suspension.

“Nick goes about his business every day,” Kitchens said. “He takes great pride in how he performs, how he prepares, how he practices and he exemplifies everything you want in a football player.”

“It means a lot to me because it’s who I am,” he said. “It’s what I represent. I love my teammates. I like being a great teammate and being for my team. It’s all about team. I’m a team guy.”

Chubb is third in the NFL with 1,011 rushing yards and fans have noticed. He’s the leading vote-getter for the Pro Bowl among AFC running backs with 75,922. Fans can vote online until Dec. 12.

Mayfield was excited his $12,500 fine for criticizing the officiating after the Seahawks game was rescinded on appeal. He received just a warning.

“It’s fantastic. Emily’s happy about that,” he said of his new wife. “More money in our pocket.”

Undrafted rookie safety J.T. Hassell was elevated to the active roster from the practice squad. Hassell, who was born with two fingers on his left hand, spent the preseason with the Browns and has been on the practice squad all season. The Browns need safety help with Murray out and Morgan Burnett (Achilles) placed on IR on Tuesday.

** Safety A.J. Howard was signed to Cleveland’s practice squad. He was undrafted in 2018 and has spent time on multiple practice squads.

Notes: Coach Mike Tomlin dismisses Steelers’ role in brawl — “I don’t know that we did anything to make it happen”
Notes: Rematch with Steelers on Dec. 1 gets more intriguing, intense by the day