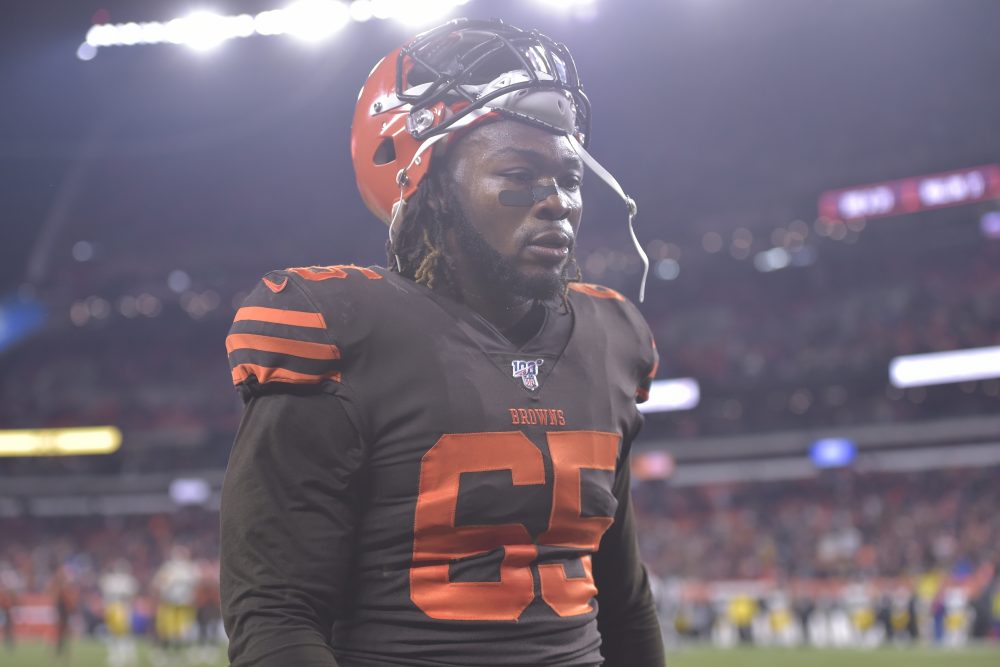 BEREA — The Browns will officially be without defensive tackle Larry Ogunjobi when they face the Dolphins on Sunday at FirstEnergy Stadium.

His one-game suspension was upheld Wednesday by appeals officer James Thrash, a former NFL receiver jointly appointed by the NFL and players union.

The suspension is without pay, so Ogunjobi will forfeit $48,247. Thrash rescinded an additional fine of $10,527.

Ogunjobi knocked Steelers quarterback Mason Rudolph to the ground from behind after Rudolph and defensive end Myles Garrett fought, culminating with Garrett ripping off Rudolph’s helmet and slamming him over the head with it.

The ruling was announced late Wednesday afternoon. Hours earlier Garrett appeared at the NFL offices in New York for his appeal hearing with Thrash.

Garrett was suspended indefinitely, and the league declared he must miss at least the final six regular-season games and the playoffs this season. He will have to meet with the commissioner’s office before he can be reinstated.

The appeal was scheduled to start at 9:30 a.m., and Garrett left about two hours later with a group of people, including his father. Thrash’s ruling is expected Thursday or Friday.

ESPN reported Garrett’s appeal was based on precedent. Texans defensive end Antonio Smith was suspended for two preseason games and a regular-season game for swinging a helmet at Dolphins guard Richie Incognito in 2013.

There’s also no mention of “indefinite” punishment in the collective bargaining agreement regarding suspensions for on-field behavior.

Browns coach Freddie Kitchens was focused on preparing for the game Sunday.

“Here in this building today, we’re worried about Miami,” he said. “We can’t control that. We couldn’t control initially all the sentencing and stuff like that. We’re just going to control what we can control.”

But Garrett was in his thoughts.

“Myles has great representation,” Kitchens said. “More importantly, Myles will represent himself well. We’re going to continue to support him and Larry and we will not waver with that support.”

The suspensions of Garrett and Ogunjobi will likely leave the Browns without three starters along their defensive line vs. the Dolphins. End Olivier Vernon (knee) missed the last two games and didn’t practice Wednesday.

Devaroe Lawrence is expected to replace Ogunjobi in the starting lineup. Chad Thomas and Chris Smith are likely to fill in at end.

Ogunjobi, a third-round pick in 2017, has started all 10 games this year, totaling 28 tackles, five sacks and a pass defensed.

Hall of Fame linebacker Derrick Brooks on Tuesday heard the appeal of Steelers center Maurkice Pouncey, who was suspended three games for punching and kicking Garrett while he was on the ground. The ruling is also expected Thursday or Friday.

Steelers coach Mike Tomlin said on Tuesday his team had nothing to learn from the ugly incident that played out on national TV.

“You know, I don’t know that we did anything to make it happen anyway in the first place,” he said. “That’s why I said we didn’t have anything to learn from it.”

“We talk all the time about being the smartest, toughest football team and sometimes one of those things don’t happen and you decrease your chances of winning and you decrease your chances of being successful,” he said. “And we want to add both of those to the mix, not one without the other. So you have to be both. That’s a continual conversation topic and will always be discussed.”