Notes: Rematch with Steelers on Dec. 1 gets more intriguing, intense by the day 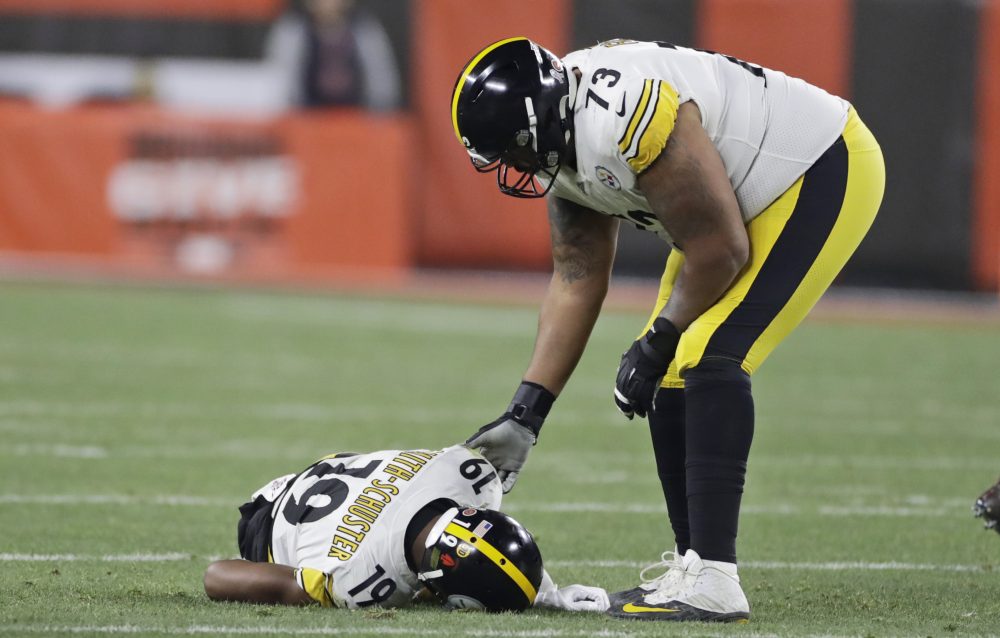 BEREA — The Browns’ game against the Dolphins and the Steelers’ matchup with the Bengals on Sunday will be only temporary interruptions.

The last 11 days have been all about the Browns vs. Steelers, and that will continue after the action Sunday. The Browns travel to Pittsburgh on Dec. 1 for a rematch that each day promises to be more intense.

The Rust Belt rivalry is always heated but went up about a million degrees over the last week.

Browns defensive end Myles Garrett and Steelers quarterback Mason Rudolph wrestled in the final seconds of the Browns’ 21-7 win Nov. 14 and it escalated into a brawl in which Garrett ripped off Rudolph’s helmet and struck him on top of the head with it.

Garrett dumped gasoline on the inferno by accusing Rudolph of a racial slur, first in the private appeal hearing and then publicly Thursday night.

“It’s going to be intense,” Richardson said. “We’ll be fighting for the division top spot, and if there’s more fuel to the fire, then so be it.

“If that’s what Mason wants to come out here on, if that’s how he wants to hype up his team and get them guys ready to play a football game, then so be it, but the Cleveland Browns are still going to be ready to play, too.”

The Steelers are 5-5 and in second place in the AFC North behind the Ravens (8-2). The Browns are 4-6 after winning two straight. The matchup in Pittsburgh could serve as an elimination game for the playoffs.

“It was already going to be pretty intense and so I’m sure it will be just as intense,” left guard Joel Bitonio said. “It’s Pittsburgh. You’re always intense, you’re always ready to go and it should be a fun one.”

Richardson was asked if extra police presence might be needed given everything that’s transpired over the last week.

“I would hope not,” he said. “Honestly, I want to keep it about ball.”

Coordinator Steve Wilks objected to the idea the Browns defense played dirty against the Steelers.

Even before Garrett hit Rudolph over the head with the helmet, the game featured three scary helmet-to-helmet hits from the Browns that caused two concussions. Cornerback Greedy Williams and Morgan Burnett both hit Pittsburgh receiver JuJu Smith-Schuster helmet to helmet on the same play in the second quarter. Williams and Burnett weren’t penalized, but Smith-Schuster left the game with a concussion.

In the third quarter, free safety Damarious Randall was ejected for putting the crown of his helmet into the side of receiver Diontae Johnson’s helmet. Johnson had blood coming out of his ear.

“Well, I would say this right here. This is a physical football team, physical game as a whole,” Wilks said. “That is not my personality, all right. That is not our personality as an organization.

“Things happen on the football field, very unfortunate, and I don’t think anything was malicious at all with the hit with Damarious. It just so happened he caught him in the wrong place. So, again, it’s nothing that we coach, nor do we condone that.”

Randall said Wednesday the helmet contact was unintentional and he apologized to Johnson.

ON BOTH SIDES NOW

The end-of-game brawl started with Garrett’s takedown of Rudolph, who called it “late” when he talked to reporters Wednesday. Rudolph responded by trying to rip off Garrett’s helmet and trying to push him off with his foot in Garrett’s groin. After they’d been separated by Steelers guard David DeCastro, Rudolph charged at Garrett, who swung the helmet and connected.

“I don’t think it was a late hit at all,” Wilks said. “I think the activity that took place after that was inexcusable on both sides. So I thought the hit itself was within the game. And then the extracurricular activity we can’t have.”

Offensive coordinator Todd Monken was asked what impact the release of receiver Antonio Callaway last week will have on the offense.

Callaway was cut Nov. 14 before the game against the Steelers as he was about to be suspended 10 games for another failed drug test. He had already been suspended for the first four games.

“Unfortunately, Antonio did not do the things that I or we expect out of him on and off the field,” coach Freddie Kitchens said. “I like Antonio a lot. I wish nothing but the best for Antonio moving forward.”

Kitchens said there are “four or five” guys who can fill Callaway’s role as the No. 3 receiver. Rashard Higgins played 29 of 71 snaps against Pittsburgh, KhaDarel Hodge 10 and Damion Ratley one. Running back Kareem Hunt also lined up as a receiver.

Hodge had one catch for 41 yards, Higgins wasn’t targeted and Hunt had a team-high six catches for 46 yards.

Randall said he received death threats following the hit on Johnson. He was bothered by them but found a way to deal with them.

“I just laugh at ’em and just keep it pushing,” he said. “I mean, I just always find it funny how like fans can say what they want to say but one of my former teammates (safety Jermaine Whitehead) had said something back to a fan and he ended up losing his job. So I just find that funny how it’s a double-sided sword with that.

“I just feel like social media or something got to find a way to stop some of those things. Because a lot of people can get hurt behind that.”

Whitehead was cut after threatening people on social media after the loss to the Broncos. Randall said he never responds.

“I didn’t say nothing to nobody,” he said. “I always thought that’s what comes with the business.”

“David looked like he moved around good,” he said. “Caught the ball well. We will see where he is. Keep going.”

The Browns must decide by Saturday if they will activate Njoku to face the Dolphins on Sunday.

** Middle linebacker Joe Schobert (groin) was added to the injury report as a limited participant.