Myles Garrett stands behind his accusation that Steelers QB Mason Rudolph used a racial slur before brawl, but loses appeal of indefinite suspension 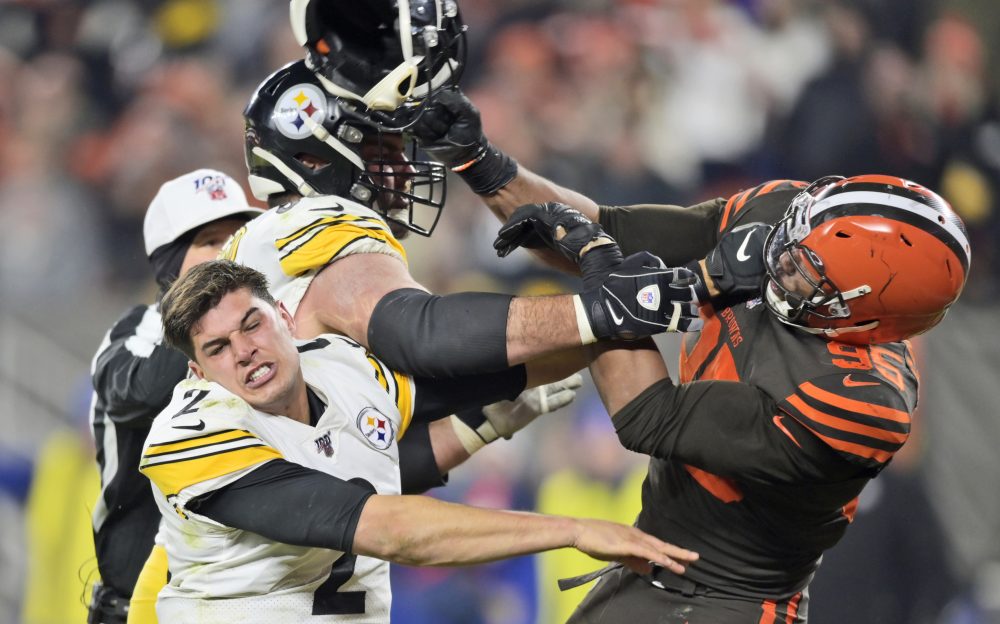 BEREA — Defensive end Myles Garrett lost the appeal of his indefinite suspension Thursday but didn’t back down from his accusation that Steelers quarterback Mason Rudolph called him a racial slur before the brawl Nov. 14 in which Garrett ripped off Rudolph’s helmet and hit him on the head with it.

Garrett made the allegation during his appeal hearing Wednesday in New York. ESPN reported it Thursday afternoon, about 90 minutes before appeals officer James Thrash upheld the NFL’s indefinite suspension that will sideline Garrett for at least the remainder of this season.

“I know what I heard,” Garrett said in a statement posted Thursday night on Twitter. “Whether my opponent’s comment was born out of frustration or ignorance, I cannot say. But his actions do not excuse my lack of restraint in the moment, and I truly regret the impact this has had on the league, the Browns and our devoted fans.”

“I was assured that the hearing was space that afforded the opportunity to speak openly and honestly about the incident that led to my suspension,” he said in the statement. “This was not meant for public dissemination, nor was it a convenient attempt to justify my actions or restore my image in the eyes of those I disappointed.”

Rudolph said Wednesday he “definitely didn’t say anything that escalated” the fight and Thursday “vehemently” denied Garrett’s accusation in statements from the Steelers and his agent.

Agent Timothy Younger called it a “lie,” “reckless and shameful” and a “desperate attempt” by Garrett to mitigate the punishment from the NFL.

“We looked into it and found no such evidence,” NFL spokesman Brian McCarthy wrote in an email to The Chronicle-Telegram.

“As we’ve consistently stated, our organizational support for Myles will continue. He is a man of high character and unquestionable integrity,” general manager John Dorsey said in a statement. “He was open and honest with us about the incident from the start. He has taken accountability for his actions on Thursday night and this situation will not define him. As an organization, our focus going forward remains on the task-at-hand, which is preparing for the Miami Dolphins.”

Coach Freddie Kitchens wouldn’t say in the afternoon if Garrett had told him about the alleged racial slur. On his weekly radio show he defended Garrett.

“I don’t question Myles’ character at all, the type of person he is,” Kitchens said. “He’s never wavered with his character and I’ll always support Myles Garrett without wavering one bit, just like the organization.”

Garrett was asked after the Browns’ 21-7 win over Pittsburgh if Rudolph had said something inflammatory to him.

A theme ran through interviews Thursday with seven of Garrett’s teammates — he hadn’t told them about the alleged slur but they believed he would’ve been provoked to act like he did.

“Had to be something to get him out of his body,” said defensive tackle Sheldon Richardson, who trusted Garrett’s version of the events. “I know he wouldn’t lie on nothin’ like that.”

The day after the melee Garrett apologized to his teammates in a meeting and issued a statement with a broad apology, including to Rudolph, who wasn’t injured by the helmet strike.

“Last night, I made a terrible mistake,” Garrett said. “I lost my cool and what I did was selfish and unacceptable. I know that we are all responsible for our actions and I can only prove my true character through my actions moving forward.

Garrett’s teammates vouched for his character Thursday following the accusation of the racial slur.

“In all of the interactions I’ve had with Myles, he’s been a truthful person and from that perspective, I’d have to believe him,” left guard Joel Bitonio said.

“I just don’t see Myles as someone who would lie or do anything like that,” receiver Odell Beckham Jr. said.

Garrett is a self-proclaimed pacifist who didn’t retaliate when someone approached his car and punched him in the face last month. But he had issues earlier in the season on the field.

Garrett was fined $52,639 in the first two games — $10,527 for striking Titans tight end Delanie Walker in the helmet in the opener and a pair of $21,056 fines for two roughing calls on Jets quarterback Trevor Siemian in Week 2.

His teammates still viewed the violence with the helmet as out of character.

“Knowing what type of guy Myles is, he’s not a hot head, he’s always real cool, calm, cool, collected,” Smith said. “It had to be something said for him to react like that.”

Unless a recording substantiates Garrett’s claim, doubt will persist.

“That’s the crazy part with life is you have two people and you’re probably never going to find out the exact truth,” Bitonio said. “It’s always somewhere in between usually.”