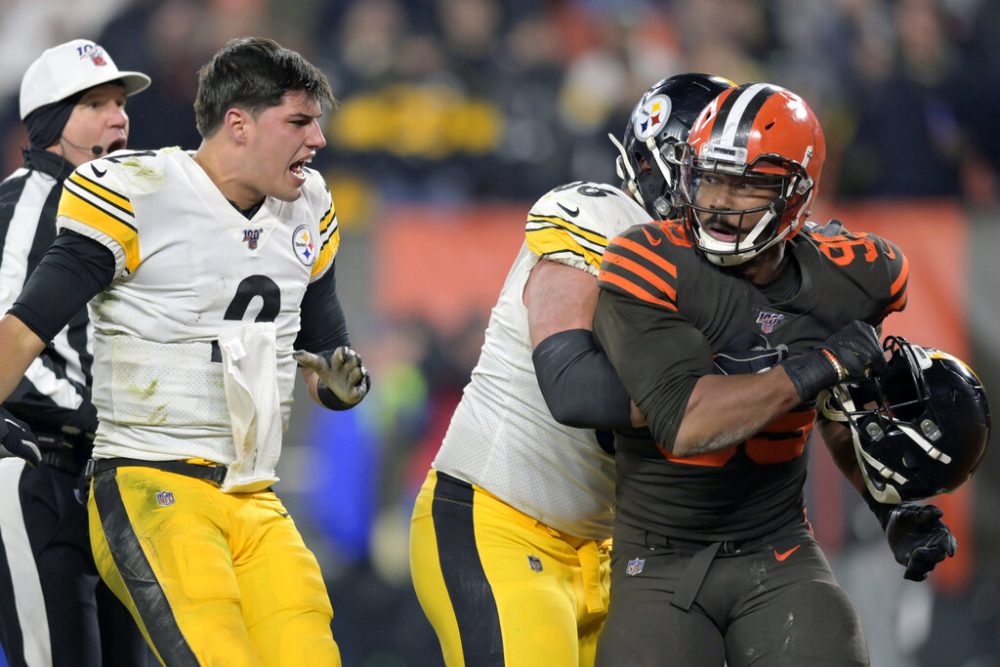 BEREA — Defensive end Myles Garrett will have plenty of time to think about what he’s done and what he’s said.

His indefinite suspension was upheld Thursday after an appeal and he won’t play again this season.

Appeals officer James Thrash, a former NFL receiver jointly appointed by the NFL and players union, upheld all discipline handed down by the NFL last week. Garrett must sit out the final six regular-season games and any potentially playoff games, then meet with the commissioner’s office in the offseason before he can be reinstated. He was also fined $45,623.

The certainty ended there on a controversial Thursday afternoon for one of the Browns’ best and most well-liked players.

During his appeal hearing Wednesday in New York, Garrett accused Steelers quarterback Mason Rudolph of a racial slur before their brawl Nov. 14 that featured Garrett ripping off Rudolph’s helmet and clubbing him on top of the head with it. ESPN was first to report the accusation.

“I know what I heard,” Garrett said in a statement posted Thursday night on Twitter. “Whether my opponent’s comment was born out of frustration or ignorance, I cannot say. But his actions do not excuse my lack of restraint in the moment, and I truly regret the impact this has had on the league, the Browns and our devoted fans.”

Rudolph was adamant in his denial. And the league couldn’t support Garrett’s claim.

“We looked into it and found no such evidence,” NFL spokesman Brian McCarthy wrote in an email to The Chronicle-Telegram.

The one-game suspension of defensive tackle Larry Ogunjobi was upheld by Thrash on Wednesday, but his $10,527 fine was rescinded. He won’t play Sunday when the Browns (4-6) host the Miami Dolphins (2-8).

“It is a blow to our defense,” coordinator Steve Wilks said. “He has been playing well. We are going to miss the (pass rush) presence with him. The other guys have to step up.”

Hall of Fame linebacker Derrick Brooks heard the appeal of Steelers center Maurkice Pouncey and reduced his suspension from three games to two Thursday, upholding a $35,096 fine. Pouncey will miss the rematch with the Browns on Dec. 1 in Pittsburgh.

Garrett’s suspension is the longest issued by the NFL for a single on-field incident. The previous high was a five-game suspension for former Titans defensive lineman Albert Haynesworth, who stomped on the face of Cowboys center Andre Gurode in 2006.

The league determined, and Thrash agreed, Garrett striking Rudolph with his helmet was egregious and deserved an unprecedented punishment.

The suspension is without pay, so Garrett will forfeit $1.14 million for the final six games, in addition to the fine from the league. He’s not permitted to be around the team during the suspension.

Garrett, the No. 1 pick in 2017, is arguably the team’s best defensive player and considered himself a candidate to be Defensive Player of the Year. He had gone three straight games without a sack but remains tied for fourth in the NFL with 10 sacks.

“Myles is a once-in-a-generation player, so obviously not having a guy like that on the field is going to be hard,” middle linebacker Joe Schobert said. “We’ve got others guys that can make plays. And as long as everybody on the defense knows their job, knows their role and their assignment, I have full confidence in everybody who’s going to be out there.”

With Garrett and Ogunjobi out this week and end Olivier Vernon still not practicing with a knee injury, the Browns could be without three of their four starting defensive linemen. Chad Thomas and Chris Smith would start at end, with Devaroe Lawrence joining Sheldon Richardson — the lone remaining starter — at tackle.

“I really equate it no different than when Denzel (Ward) and Greedy (Williams) were out,” Wilks said of his starting cornerbacks, who were injured early in the year. “Other guys have to step up. If you look at Chad Thomas. I think he right now has three sacks, so he’s been performing well. We need more out of him as well as Chris Smith and all the other guys. Bryan Cox is a guy we just picked up. He’s going to have to perform and play well.

“They’re not canceling the season. We’ve got to find a way to compensate for these losses.”