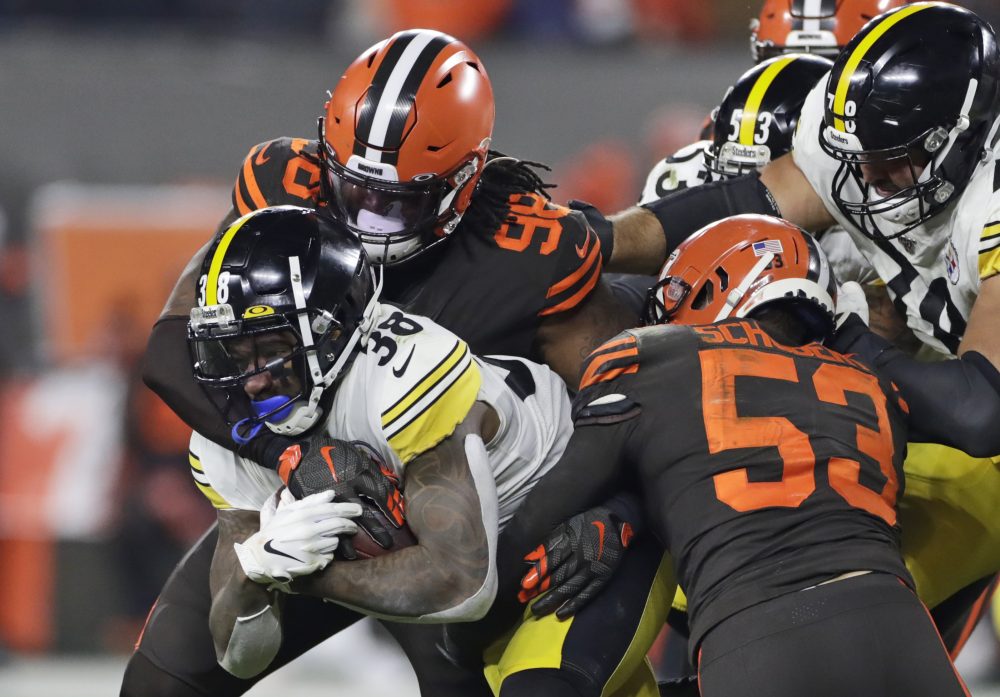 Remember when the defensive line was supposed to be the strength of the Browns? With four potential Pro Bowlers filling the starting roles?

That will seem like a distant memory against the Dolphins. End Myles Garrett is done for the year after conking Steelers quarterback Mason Rudolph on the head with Rudolph’s helmet, tackle Larry Ogunjobi is suspended for this week for knocking Rudolph to the ground in the fight and end Olivier Vernon will miss his third straight game with a knee injury. The Browns will be without 18 of their 31 sacks — Garrett 10, Ogunjobi five, Vernon three — and will turn to Chad Thomas, Chris Smith and Bryan Cox at end and Devaroe Lawrence and Eli Ankou at tackle.

Tackle Sheldon Richardson, the lone starter remaining, said he’s never experienced anything like this decimation. The career backups must pick up the slack.

“Everybody up there needs to play well,” coach Freddie Kitchens said. “They would not be on this team if we did not have confidence in them to do that. I expect them to play well. They expect it out of themselves.”

The loss of Garrett is obviously the biggest blow. His freakish pass-rush ability allowed coordinator Steve Wilks to drop more defenders in coverage, while forcing offenses to consistently double-team. The opponents will adjust, which will stress Wilks and the defense.

“You saw a lot of chipping with Myles when he was in there,” Wilks said. “So hopefully the other guys can eventually gain that respect, but right now probably don’t see that. We’ll have to do some different things to be able to try to compensate for (losing) the caliber of player that Myles is.”

Luckily for the Browns, Miami’s offensive line isn’t good. The Dolphins have given up 42 sacks, and the Bills lived in the backfield last week. But no matter who the opponent is, without Garrett, cornerbacks Denzel Ward and Greedy Williams will be asked to cover longer.

“That is a major factor for us is allowing the D-line to get there, being tight in coverage and making the quarterback hold the ball even longer,” Wilks said.

Quarterback Baker Mayfield looks like himself again. After a difficult start to the season — 12 interceptions, six touchdowns in seven games — Mayfield has thrown five touchdowns without an interception over the last three games. He wasn’t perfect against Pittsburgh — 17-for-32, 193 yards, two touchdowns — but he was outstanding inside the pocket, reminiscent of his stellar rookie season. He repeatedly bought time, kept his eyes downfield and made big-time throws. Two great examples were a 41-yarder to receiver KhaDarel Hodge and an 8-yard touchdown to tight end Stephen Carlson.

“I still think I rolled right premature on one or two,” Mayfield said. “There was improvement, but to me, not good enough yet.”

“I think it has been a conscious effort, a continued effort to stay in the pocket,” Kitchens said. “That is where you are the most safe. That is where the field is still — both sides of the field, horizontally and vertically — available to you. You do not want to take away the fact that he is athletic, he can get outside the pocket and make plays, but you also have to understand that more plays are to be made from inside the pocket.”

Mayfield still ranks at or near the bottom of the league in the season stats (59.2 completion percentage, 76.8 rating) but no longer resembles the tentative, jittery guy from the first half of the season. The coaches were also quick to mention how the line and receivers are playing better, too.

“Baker, I think, has come into his own again,” left guard Joel Bitonio said. “It’s some life, some good things that we’re seeing from him, and I know he’s extremely focused right now.”

The Dolphins present the opportunity for the breakout game Mayfield hasn’t had this season. The 350-yard, three-touchdown day that reminds everyone why he was the No. 1 pick in the draft. Miami has a league-low-tying 13 sacks. Opposing quarterbacks have thrown 23 touchdowns, six interceptions and posted a 105.6 passer rating. And the Dolphins have a league-worst seven takeaways, leaving them last in the league with a minus-12 turnover differential.

“Baker’s always been great to me. I was never down on him,” running back Nick Chubb said. “I have full confidence in Baker and what he’s doing. He’s a very special player.

The Dolphins are 2-8, last in the league in scoring differential (305-139) and yardage differential (394.3-263.0 per game) and 10½-point underdogs to the Browns (4-6). But as long as quarterback Ryan Fitzpatrick is at the controls, the Dolphins remain a threat. Fitzpatrick, who turns 37 on Sunday, had won two straight before a loss to the Bills last week and is the only quarterback in NFL history to win a start for seven teams. He’s also the first to have a 300-yard game with seven teams. He’s 5-1 in his career against the Browns.

“Savvy vet,” Richardson said. “Honestly, knows how to command the offense. Got two wins out of his last three games, so you know he’s trying to get that thing right over there. And they’re coming in to get a dub.”

Fitzpatrick is right with Mayfield at the bottom of the league stats, completing 63.2 percent with eight touchdowns, eight interceptions and a 79.9 rating. So the Harvard alum brings an unpredictable nature to the matchup.

“He is a major wild card,” Wilks said. “This guy is a very savvy vet, extremely smart, can still beat you with his legs. He does a great job avoiding the rush, making guys miss in the pocket, and he does a tremendous job of really putting the ball where it needs to be. He can still throw the deep ball. He is a proven winner.”

Fitzpatrick is only a year removed from his best season. In eight games filling in for Jameis Winston in Tampa Bay, he threw for 2,366 yards, 17 touchdowns, 12 interceptions and a 100.4 rating. He led the league with 14.4 yards per completion. The Dolphins have quality receivers in DeVante Parker, Jakeem Grant and Allen Hurd, who make Fitzpatrick dangerous.

“I have a lot of respect for him,” Wilks said. “As I told the guys, we have to be ready to play.”

A huge game from the special teams might be the only way the Dolphins can pull the upset. The Browns must be on guard.

Last week the Dolphins got a 101-yard kickoff return for a touchdown by Grant and recovered an onside kick. They’re the 12th team since 1991 to execute the daily double in the same game.

Priefer said the Dolphins have recovered three onside kicks, but the first two were negated by offside penalties. At 2-8, the Dolphins won’t be afraid to gamble.

“Jakeem Grant is an outstanding kickoff returner,” Priefer said. “He is confident, and you can tell by the way he runs. Extremely quick. You have to throttle down under control to get him tackled. He can make you miss in a phone booth, he is so quick. He is also explosive. He can break tackles. He is so strong for a smaller man.”

Fifty-three years have passed since the Browns had a pair of 100-yard rushers in the same game — Leroy Kelly (113) and Ernie Green (103) on Oct. 9, 1966, vs. Pittsburgh. Chubb and Kareem Hunt have the potential to end that drought, and a blowout of the Dolphins would provide the perfect opportunity. The Dolphins rank 31st in the league allowing 148.3 rushing yards per game.

“If it happens, it happens, you never know,” Hunt said. “It could happen any game, any time.”

Hunt has made an instant impact in the two games since returning from suspension, and the coaching staff is only scratching the surface of how to use him and Chubb together and separately. The Browns have run 49 plays with both backs on the field, averaging 7.02 yards with six plays of 20 yards, per Sportradar.

“You are playing a little bit of catch-up,” said coordinator Todd Monken, who compared the duo to Fred Taylor and Maurice Jones-Drew, whom he coached with the Jaguars. “There are only so many reps that we have leading up to the game, and it is a race against the clock to get the game plan in and to see where you can fit all of our pieces, not just those guys, to give us the best chance to win. They are obviously two really good football players so we have to continue to find ways to get them touches in a number of ways.”

Chubb has been outstanding all season, averaging 101.1 rushing yards, the most by a Cleveland player since Jim Brown’s 103.3 in 1964. Chubb ranks third in the NFL with 1,011 yards rushing, 48 behind leader Christian McCaffrey of Carolina, and has 90 yards from scrimmage in nine straight games, the longest active streak in the NFL.

“We’re just getting started,” Chubb said. “The sky’s the limit with what we can do with us in the backfield and on the field at the same time. I just look forward to each week, going out there and playing with another great player.”

League-low penalties accepted against Miami, for a league-low 444 yards. Meanwhile, the Browns have been penalized 87 times for 822 yards.

Yards per carry for Dolphins starting running back Kalen Ballage, which ranks 233rd in the NFL. His longest run is 8 yards.

Margin the Dolphins have been outscored by in the third quarter

Turnovers committed by the Browns in the last three games