Browns 41, Dolphins 24: The breakdown — thumbs up, thumbs down, the matchups 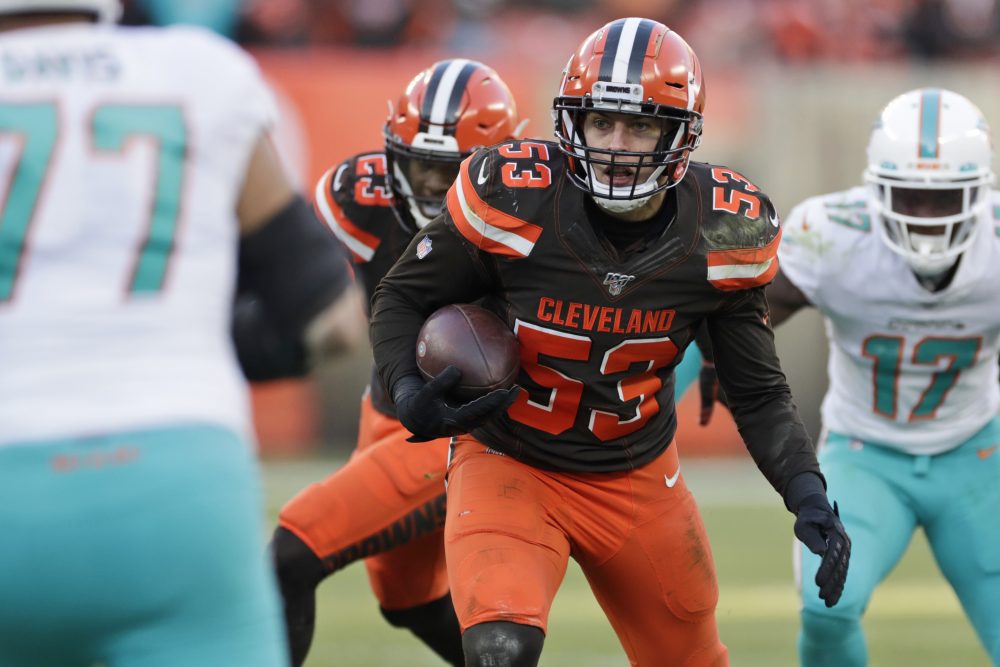 He has two interceptions in two straight games. He’s only 88 games behind receiver Jarvis Landry, who has the longest active streak in the NFL with 90 straight games of at least two catches.

Schobert had two interceptions in his first 54 NFL games. He has four in the last two.

“They say sacks, turnovers come in bunches, so I feel like I’ve been playing at a level I’ve played at before, but I’m at the right spot at the right time, stuff just comes your way,” he said.

Schobert became the sixth linebacker in NFL history with at least two picks in consecutive games, and the first since the Colts’ Cato June in 2005. He added five tackles and two passes defensed and has been playing at a high level all year.

“Situation-wise, I think I’ve been doing a good job of understanding what they’re trying to do and that puts you in a better spot, especially in the passing game in today’s NFL,” Schobert said.

He played receiver in high school and began his career at the University of Wisconsin as a receiver, so he has good hands.

“Schob is a ball magnet, man,” free safety Damarious Randall said. “If you want the ball, just be by Schob when the quarterback’s throwing it ’cause he tends to find a way to get there and he’s definitely helping the team out a lot. He has been a consistent leader since I’ve been here. Definitely a guy I look up to.”

The Dolphins were depleted in the secondary, and it showed. Crawley and Needham, a rookie, were both undrafted, so sticking with Odell Beckham Jr. and Landry is a tough assignment. But they get paid to slow them down and weren’t able to do it.

Crawley nor Needham had a pass defensed.

“If I am out there on the field, I need to be competing and doing my job,” Needham said. “It does not matter who is over there. I need to execute and make plays on the ball. I did not do that much this game. It was tough for me, but I need to bounce back. That is all I can do.”

It was a long time coming.

Beckham lined up in the right slot on first-and-10 from the Miami 35-yard line with 1:51 left in the first quarter and the Browns ahead 7-0. Beckham ran a long diagonal to the left, sprinting behind the defense and into the end zone. Baker Mayfield put it out in front for Beckham to go up and grab.

The touchdown was Beckham’s second with the Browns, his first since an 89-yard catch-and-run against the Jets in Week 2. He finally broke the ice at FirstEnergy Stadium.

“It was good,” Mayfield said. “It was a little play-action. It was just a normal progression read. They decided to drop into a zone coverage that Tennessee ran and just robbed it a little bit, and Odell had an angle on a guy and leverage on him. He made a play. Put it up for him, and he made a great play.”

The touchdown snapped an eight-game drought, the longest of Beckham’s six-year career.

“It’s what we work hard for every single week, to come out here and do this,” he said of him and Landry. “Just to see it happen, it was great to be able to look up and know every pass is coming our way today and we’re going to make a play on it. That was a lot of fun.”

Consecutive passes by Baker Mayfield without an interception, a career best, before a third-quarter throw behind receiver Odell Beckham Jr.

“He’s the head coach. Big part. He hits on everything, a little bit too much, beats a dead horse sometimes. Team meetings get a little long. But we need it. We need it. We definitely need it.” — Defensive tackle Sheldon Richardson on Freddie Kitchens’ role in the team’s turnaround

“This is a 16-game season. Even when we were 2-6, just like I told y’all, we’ve got a lot of football left and I’ve seen teams do it up in the past, string together wins and then next thing you know the confidence level is off the charts, and very, very, very, very, very dangerous team to beat.” — Free safety Damarious Randall on making a playoff push

Ryan Fitzpatrick threw for 214 yards and two TDs and rushed for 45 yards, but the Miami running attack is non-existent. Receiver DeVante Parker had six catches for 91 yards.

Miami has no pass rush, which makes life difficult for the secondary.

Austin Seibert missed two field goals into the Dawg Pound end and knocked a kickoff out of bounds. The return game is still missing.

Miami’s Matt Haack had a net of 42 yards on four punts. The Dolphins were stopped on a fake punt.

The Browns were able to focus through the craziness of the previous 10 days, and that’s a credit to Freddie Kitchens. He got cute with one trick play and kept throwing too late in the game, but his offense scored 41 points.

Commentary: Freddie Kitchens’ team proves a lot by quickly moving past Thursday Night Nightmare
Crunch the numbers: Playoffs are within reach for Browns