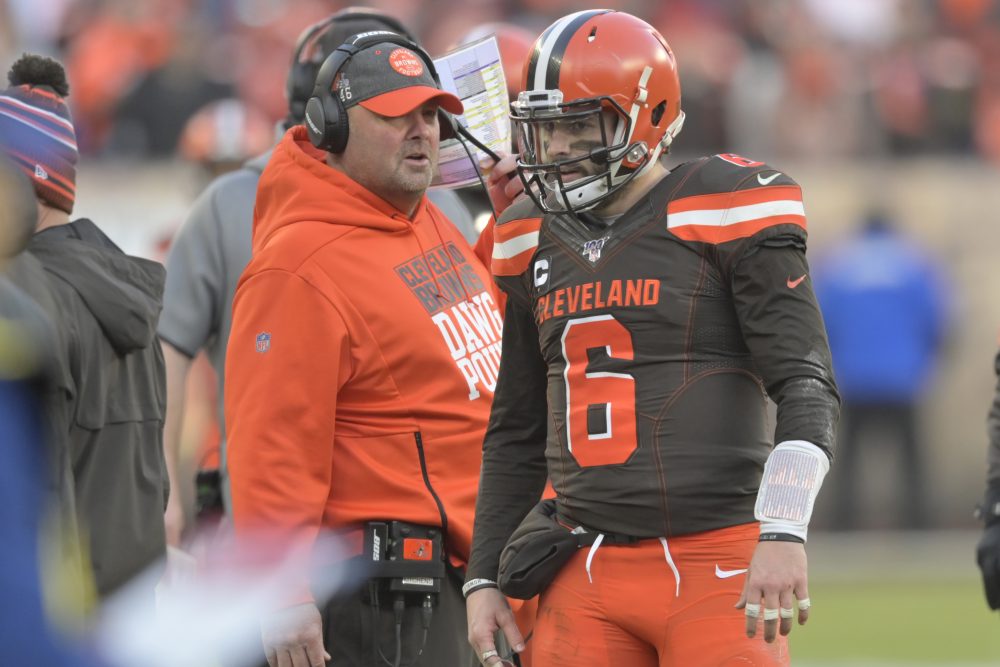 Freddie Kitchens’ Traveling Rumpus Room, Pigskin Tilt-A-Whirl and Whoopty-Hell Gridiron Revue clippity-clopped back onto the turf at Haslam Acres on Sunday. It was the company’s first appearance since its last appearance, 10 days previous, which ended with a messy little disturbance that necessitated some institutionally mandated roster tweaks and numerous electronic funds transfers.

The show must go on, however, and Sunday the show went on, because the Browns are nothing if not great theater.

Sunday the Browns were presented with exactly what they needed following the Thursday Night Nightmare against the Steelers: not the outcome (a 21-7 Browns win), but the outcome (the loss of Myles Garrett for the rest of the season).

That’s a franchise-rattling loss. But Sunday, thanks to the serendipitous visit by the futile fish from Miami, the Browns were able to comfortably recalibrate, reboot and rebirth their season, which was in danger of flying even further off the rails than it already had prior to Helmetgate.

“We showed early in the game we were ready to play,” said Kitchens, undoubtedly delighted to be talking postgame about a relatively smooth victory rather than a riotous, brawl-filled one.

“A win is a win, and it was important for us to get back on the field after everything,” Baker Mayfield said.

Sunday against the Dolphins the Browns wasted no time in proving they had put the Thursday night Pittsburgh slugfest behind them. That’s important, because that was the type of ugly event that could send a season spinning out of control.

That it didn’t is a credit to Kitchens and his staff. That it didn’t was evident almost immediately. Less than five minutes into the second quarter the Browns had already scored more points (21) than they had in six of their first 10 games this year.

Granted, it came against the hapless Dolphins who have lost nine of their 11 games, but you can only beat the team you’re playing that day.

“Our goal every week is to start fast offensively and go three-and-out on defense,” Kitchens said. “It was good to get both sides on the same page.”

Indeed, with 75 percent of their starting defensive line missing due to injury or suspension (Garrett, Larry Ogunjobi and Olivier Vernon), the Browns still produced four sacks of Miami quarterback Ryan Fitzpatrick, the greatest NFL quarterback ever to come out of Harvard.

OK, so he’s the only NFL quarterback to come out of Harvard. But still …

Mayfield, who is finally starting to play like last year’s Mayfield, was sensational in the first half, completing 16 of 18 pass attempts for 198 yards, three touchdowns, no interceptions and a quarterback rating of 152.1.

“The offense did a great job of executing,” Kitchens said. “Baker was very efficient and did a good job of getting the ball to the receivers.”

The Browns led 28-3 at the half, although the Dolphins cut the lead to 28-17 after three quarters. But the defense dug in, and the offense revved it up to score a touchdown and kick two field goals in the fourth quarter, leading to not just a victory, but a decisive and timely one at that.

There is still some rock climbing ahead of them. The Steelers, perhaps showing they are having more trouble turning the page than the Browns, had to rally late to beat the winless Bengals.

Pittsburgh is 6-5, Cleveland 5-6. But a win next week would pull Cleveland into a tie with Pittsburgh, which would technically put the Browns ahead of the Steelers, since the Browns would have won the season series.

What’s most important now, however, is the Browns have won three in a row. Garrett is done for the year, but the team has successfully moved on from the ugliness of the Thursday Night Nightmare.

“It’s not about what the adversity is,” Mayfield said. “It’s about what you do with it, how you handle it and how you move forward.”

Consider the Browns moving forward. On Sunday, in their highest-scoring game of the season, they won a big game, especially given the circumstances. Because now, the circumstances on Sunday in Pittsburgh will be bigger still.

Prediction: Browns 27, Dolphins 20
Browns 41, Dolphins 24: The breakdown — thumbs up, thumbs down, the matchups