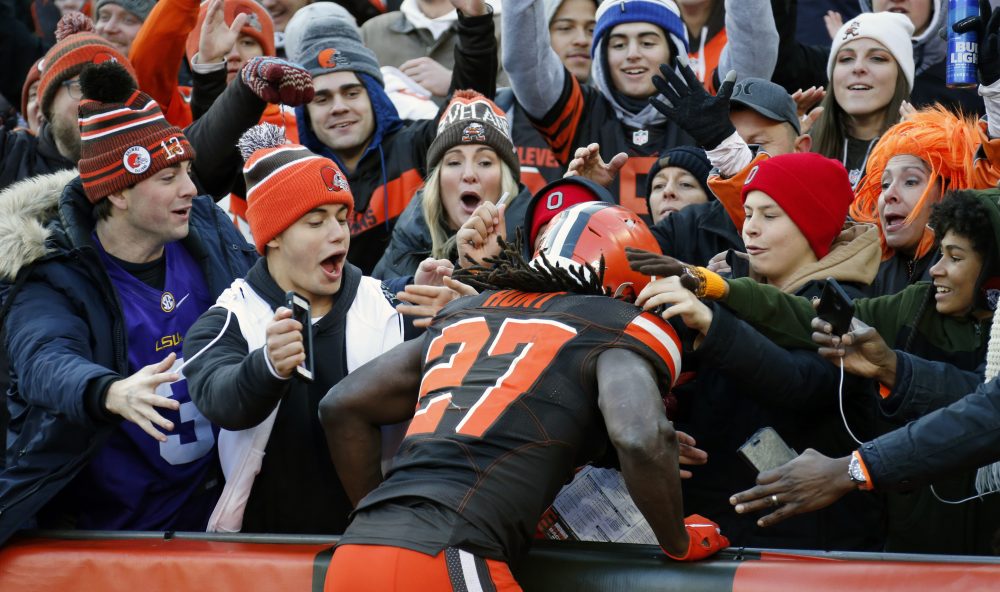 Hunt spent his entire amateur career in Ohio, rushing for more than 5,000 yards and 83 touchdowns in his junior and senior seasons at Willoughby South High School and piling up 4,945 yards and 44 touchdowns in his four years at the University of Toledo.

His first touchdown for the hometown NFL team meant the world to him.

“It’s a dream come true,” Hunt said after the Browns’ 41-24 win over the Dolphins. “It’s a milestone. As a young kid I always dreamed of coming out here and playing for the Cleveland Browns. The big thing happened today, I got in the end zone wearing brown and orange.”

He had the ball and planned to display the souvenir in his man cave.

But only after a few nervous moments. He threw the ball in celebration after he scored.

“I forget to grab them sometimes,” said Hunt, who rushed eight times for 37 yards and caught two passes for 9. “Jarvis got it for me right here, I’m not going nowhere without it.”

He celebrated the touchdown by diving into the stands. The only downside was the Browns scored in the west end zone.

The Browns haven’t lost since Hunt returned three weeks ago from an eight-game suspension. It hasn’t taken him long to get acclimated to his role supporting Nick Chubb, who had 106 yards and a touchdown on 21 carries and added three catches for 58 yards.

“(I’m) very comfortable,” Hunt said. “It’s really starting to click and I’m fitting in pretty well. I enjoy running the ball and being with this offense.”

Quarterback Baker Mayfield said having Hunt is good for Chubb.

“He has taken a load off of Nick’s plate,” he said. “Obviously Nick carrying that many carries throughout the year takes a toll on your body. Him being able to come in and spell him out a little bit is great.

“Obviously then you add in his play, and it speaks for itself, his talent. He is a true team guy. He doesn’t care what happens. He just wants to win. Him being in there and him being that explosive player and that hungry guy adds a whole dynamic to our offense that we really need.”

SEE YOU NEXT YEAR

The indefinite suspension of defensive end Myles Garrett was upheld Thursday after an appeal and will cost him the rest of the season, including the playoffs if the Browns make them.

But Garrett’s exile isn’t expected to extend into the 2020 season, a team source told The Chronicle-Telegram.

The league’s suspension mandates Garrett meet with the commissioner’s office following the season before he can be reinstated. The feeling is Garrett’s character and the remorse he’s already shown — in a pair of statements and the appeal hearing — should allow him to return during the offseason.

It’s not just optimism from the team. The league expects the same, according to ESPN and CBS reports Sunday morning.

“That shouldn’t be read as a threat that this will carry over into 2020,” a source told CBS’ Jason La Canfora, “but given the level of violence that was displayed it’s important that he make the effort to check back in with the NFL and NFLPA and discuss things with them.”

Garrett was given the longest suspension in NFL history for a single on-field incident when he ripped the helmet off Steelers quarterback Mason Rudolph and hit him over the head with it with eight seconds left in Cleveland’s 21-7 win Nov. 14.

Owner Dee Haslam showed her support for Garrett, wearing a “95” winter hat on the field during pregame.

The Browns have solved their red zone problems.

They scored touchdowns on four of five trips Sunday, and Mayfield blamed himself for making an errant throw to receiver Rashard Higgins on the fifth one. They are 9-for-12 during the three-game winning streak after opening the year 12-for-26, including 1-for-5 in a loss to Denver.

“When we got our chances, we capitalized,” Mayfield said.

** The Browns also sprinkled in some no huddle, which had been missing from their repertoire.

** Undrafted rookie tight end Stephen Carlson started, continues to get more playing time and had a catch for 8 yards. He replaced Pharaoh Brown in the tight end rotation, as Brown was a healthy scratch.

Teammates and fans are used to it, but that doesn’t make Chubb’s all-out running style any less impressive. He again fought for every yard and carried defenders.

“I was about to say, ‘Am I ever in awe? No,’ but I don’t want to take it for granted,” Mayfield said. “The guy is very special. He continues to be special for us. We know exactly who he is. We can’t lose sight that he is a great player.”

The Browns opened as a one-point favorite next week in Pittsburgh, according to BetOnline.

** Defensive end Porter Gustin got a sack in his NFL debut.