Odell Beckham Jr. is right on with prediction of big day for Jarvis Landry, then joins in fun as both reach end zone 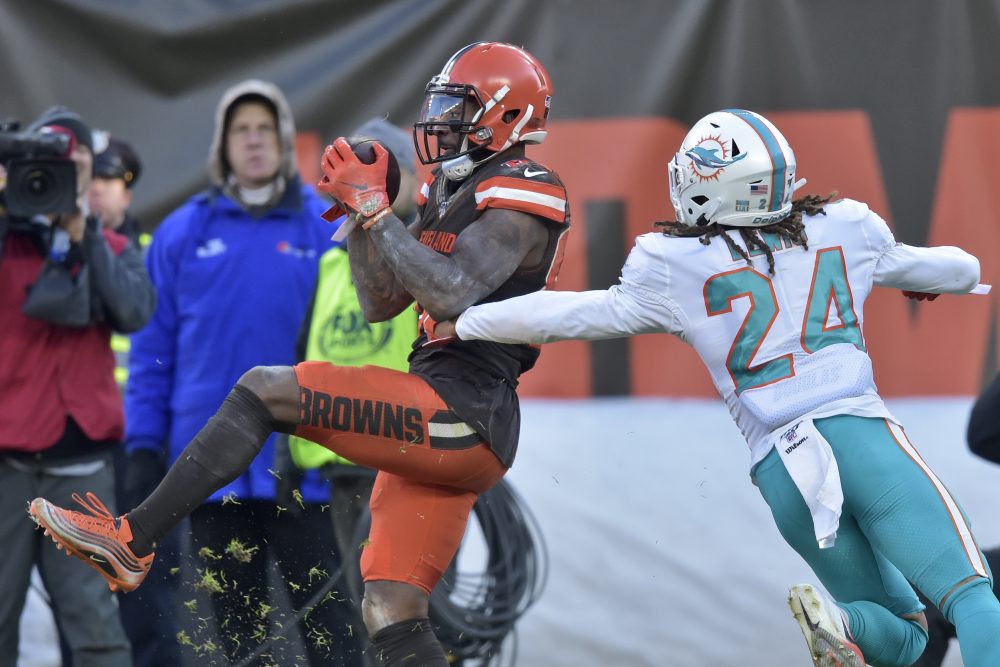 CLEVELAND — When the Browns traded for Odell Beckham Jr., they envisioned he and former LSU teammate Jarvis Landry giving them a one-two punch.

Both landed haymakers against the Dolphins on Sunday.

Landry caught 10 passes on 13 targets for 148 yards and two touchdowns, and Beckham caught six of eight targets for 84 yards and a 35-yard touchdown, as Cleveland defeat Miami 41-24 at FirstEnergy Stadium.

It was the first time the duo caught touchdown passes in the same game since their college days — Sept. 14, 2013, against Kent State.

“Without getting too into it, we had a talk on Friday night and we came over and went and sat out by the fire,” said Beckham, who stood next to Landry for the joint interview session. “We were just talking, saying how we were going to give everything that we had to each other, just knowing that these moments are so special.

“Today was one of those days. I could look at him and just know we were going to give everything that we had. And to be able to come out with a win, it’s a good feeling.”

Landry downplayed that his biggest game of the year came against his former team, after saying during the week he had it circled on the calendar. He averaged 100 catches and 1,009.5 yards with the Dolphins from 2014-17, also catching 22 touchdowns.

“No, it didn’t mean extra, but it was fun,” Landry said. “Definitely fun.”

His quarterback was not as coy.

“He did a good job suppressing the emotion, keeping it to himself and making it all about the team,” Baker Mayfield said. “But deep down inside, we know how much it meant to him.”

Beckham must have seen something in the stars before the game, predicting that Landry — who turns 27 on Thursday — would finish with 156 yards and two touchdowns on nine catches.

He didn’t miss by much.

“Just a few yards off, yeah,” Beckham said. “I told you what was going to happen today. I just told you. I just know him. It’s not just this game, it could be every game.

Both receivers got on the board in the first quarter, Landry on the opening drive. He came up with an 18-yard catch on second-and-5 to take Cleveland inside the Miami 20-yard line. A few plays later, Mayfield found him on a slant from 7 yards for the touchdown.

Beckham caught his touchdown — his first since Week 2 against the Jets — after a beautiful play-action bootleg from Mayfield, who found his star receiver wide open over the middle from 35 yards.

“They were making plays all day,” Mayfield said. “They are there when they need to be there making the plays we are counting on them to make, and they are doing it consistently for us.”

It was back to Landry on the opening drive of the second quarter. He helped get Cleveland out of a second-and-25 hole when he drew a pass interference penalty on Miami’s Ken Crawley, putting the Browns at the 5-yard line.

Mayfield was flushed right on the next play but found Landry in the back of the end zone.

The floodgates opened for Landry in the second half. While he didn’t score, he made clutch catch after clutch catch to sustain drives and help put away the game. He had back-to-back catches for 17 and 13 yards on Cleveland’s second drive of the third quarter, although it ended with a missed 46-yard field goal by Austin Seibert.

The Dolphins made a run in the third, cutting Cleveland’s lead to 28-17, but the duo helped put out the fire with big plays on the Browns’ first two drives of the fourth quarter.

First it was Beckham, who got the Browns near midfield with an 8-yard catch. He then drew a pass interference penalty on Ryan Lewis, taking Cleveland to the 25-yard line. Seibert hit a 40-yard field goal to push Cleveland’s lead back to 14.

Landry saved his best work for Cleveland’s second drive in the fourth, when he went up and over Nik Needham to make a great catch for 22 yards. He showed off his hops again two plays later when he jumped over Lewis and tiptoed the sideline for a two-handed grab and 37 yards.

Miami challenged that Landry pushed off for offensive pass interference, but the play stood. Seibert drilled a 26-yard field goal four plays later to make it a three-score game.

“They’re good receives,” Miami coach Brian Flores said. “I think we had good coverage on them a lot of the day. They made plays. That’s what they do.

“We’ve got to find a way to get the ball out, knock some of those out, and get a better pass rush. They made a lot of plays.

Browns believe they will not only handle controversy and challenge of last 10 days but be galvanized with us-against-the-world mindset
Odell Beckham Jr. has “mixed emotions” about ending TD drought during frustrating season