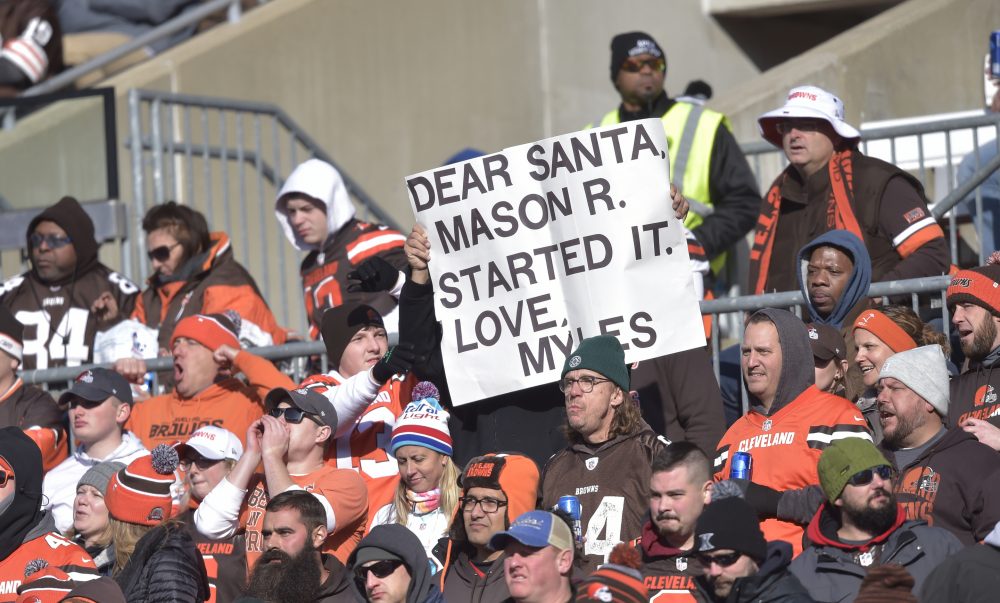 Then he thought for a second.

“Did you see him last game?” he said.

Rudolph threw four interceptions Nov. 14 as the Browns beat Pittsburgh 21-7 in a game marred by a brawl with eight seconds left.

The Browns had just beaten the Dolphins 41-24 on Sunday for their third straight win, all at FirstEnergy Stadium. It wasn’t too soon to talk about what could be an elimination game with the Steelers.

The Browns are 5-6. The Steelers are 6-5 after a 16-10 win over the Bengals on Sunday in which Rudolph was benched. Rookie Devlin “Duck” Hodges replaced him.

Rudolph was a popular topic in the Browns locker room last week. The Browns believed he should’ve been suspended for his role in the fight that earned defensive end Myles Garrett an indefinite suspension.

Rudolph tried to pull off Garrett’s helmet, pushed him with a foot in the groin and chased after him. Garrett will miss the rest of the season after yanking off Rudolph’s helmet and smacking him on top of the head with it.

The controversy got uglier when Garrett accused Rudolph of calling him a racial slur before the fight. Richardson said that’s not a reason he wants to face Rudolph again.

“We’re past that. We’re moving forward, honestly,” he said. “And whatever happens at the game happens. It is what it is.”

Rudolph had “vehemently denied” Garrett’s accusation in a pair of statements Thursday and spoke for the first time about it after the game Sunday.
“It’s totally untrue,” Rudolph told reporters. “I couldn’t believe it, and I couldn’t believe that he would go that route after the fact. But it is what it is and I think I’ve moved on. One day it was tough, but moved on. We’re good to go now.”

He said he didn’t say anything that could’ve been misinterpreted.

“Absolutely not,’’ he said. “There was nothing. Not even close.”

Mason Rudolph on Myles Garrett’s accusation he used a racial slur in the Cleveland fight:

The Browns did a good job getting past the distractions of the previous 10 days to handle the Dolphins, but Richardson downplayed the difficulty.

“That was only controversy in the media, not in our locker room,” he said.

What can’t be disputed is that Richardson was the only starting defensive lineman in the lineup. Garrett is out for the year, tackle Larry Ogunjobi was suspended for one game for knocking down Rudolph during the fight and end Olivier Vernon missed his third straight game with a knee injury.

“Next man up,” Richardson said. “Proud of the D-line, proud of the whole team, honestly, coming out there and doing what we’re supposed to do.”

Quarterback Ryan Fitzpatrick (21-for-39 for 214 yards, four sacks, two touchdowns, two interceptions and a 65.5 rating) had time to throw much of the day and scrambled five times for 45 yards to lead the Dolphins, but Kitchens was proud of the effort from the defensive line.

“They continued to fight all day. It was not easy,” he said. “Generating pressure was not easy.”

Richardson had five tackles, two sacks and a forced fumble. He knew he had to become a playmaker without the team’s best three pass rushers.

“I usually make sure those guys, OV, Myles and Larry O, they’re getting theirs and no leaky yardage,” he said. “I just hit home today.”

“Sheldon Richardson is a great football player,” he said. “His motor, he demonstrated great leadership skills this week, which we needed. Sheldon is a guy that is going to be there in the end. He showed up for us this week.”