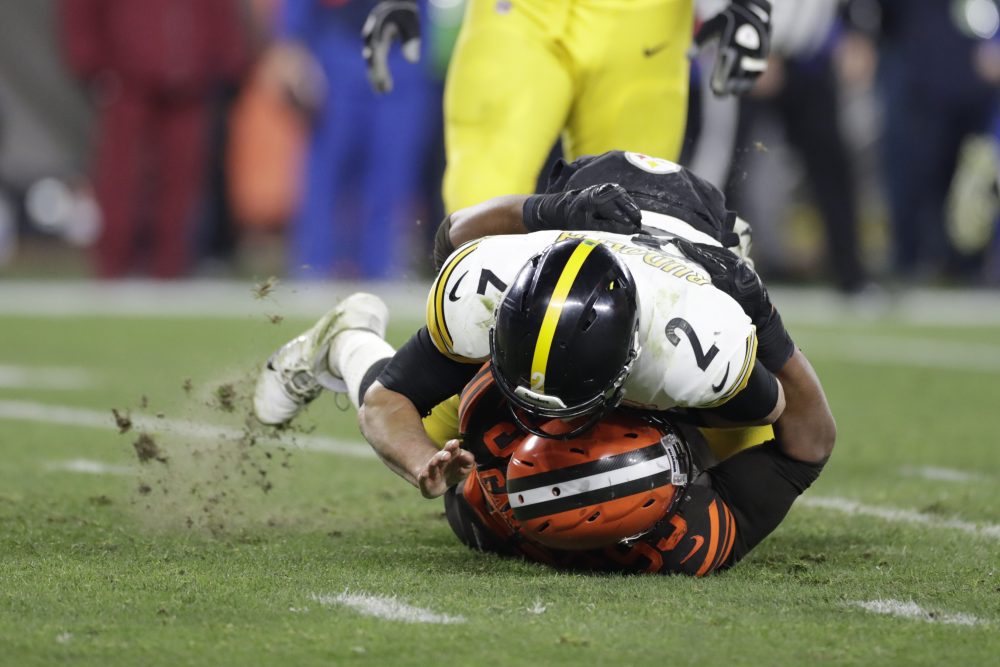 Defensive end Myles Garrett won’t be in uniform for the Browns and Mason Rudolph likely won’t be the starting quarterback for the Steelers.

The anger sparked by their late-game brawl Nov. 14, however, is certain to be present Sunday when Cleveland travels to Pittsburgh in an AFC North rematch. Kickoff at Heinz Field is set for 1 p.m.

“The emotions are going to be high, obviously, because of the situation that happened and what happened to Myles and some of our other guys,” Pro Bowl cornerback Denzel Ward said Monday. “It’s going to be a heated game.

“A lot of guys are going to try to get under your skin and do things to get you out of character, but we have to stay poised and focused on what we’re there to do — and that is win the game.”

The Steelers own the final AFC wild card spot via a tiebreaker over the Raiders, Colts and Titans. All four teams are 6-5, while Cleveland is 5-6 and riding a three-game winning streak with five games to play.

Any playoff implications — they are huge for both rivals — will be overshadowed nationally by the furor generated by Garrett’s helmet-on-skull strike to Rudolph in the final seconds of the Browns’ 21-7 win at FirstEnergy Stadium.

“I’m sure it will be a more talked about game than it would have been otherwise, but I can really only speak for myself: I’m going to treat this like any other game,” Cleveland center JC Tretter said. “What happened a week and a half ago, that’s passed and it is over. The discipline has been passed down and now it’s time to move past it.”

Defensive tackle Larry Ogunjobi will return to the lineup after serving a one-game suspension for knocking down Rudolph during the altercation, while Garrett has been banned by the NFL indefinitely, including at least the rest of this season.

Steelers center Maurkice Pouncey, who attacked Garrett following his helmet-swinging outburst, had his suspension reduced from three games to two on appeal and will miss the rematch.

Whether Rudolph sees any action is the big question in Pittsburgh. Undrafted rookie Devlin “Duck” Hodges replaced him Sunday during a 16-10 victory over Cincinnati and all signs point toward coach Mike Tomlin sticking with him.

Garrett accused Rudolph of using a racial slur before the fight, but the NFL has found no evidence it occurred.

“I don’t think a single player is going to be the difference in how a lot of guys feel,” Ward said, referring to Rudolph. “Outside of what happened, there was still a lot of trash talking going on between specific players. Just the rivalry itself is going to spark a lot of emotions.”

The Steelers also could be without running back James Conner (shoulder) and wide receiver JuJu Smith-Schuster (concussion), both of whom were hurt against the Browns.

Tomlin said he won’t update their status until required by the league Wednesday. The same goes for announcing his starting quarterback.

“I have no idea, the team has no idea,” Conner said on a Pittsburgh radio interview. “I don’t think Mike Tomlin’s made a decision.”

Cleveland coach Freddie Kitchens urged his players not to get caught up in the hype during their work week, regardless of the questions they are asked or how stirred up the fans continue to be.

Tretter is confident that will be the case, noting the positive of playing the Steelers twice in three games because their individual assignments remain fresh in their minds. Ward expressed similar thoughts, which was music to Kitchens’ ears.

“I want them to go in with one thing and one thing only on their minds, that is to do their job,” he said. “Anything that overshadows that in any way is not acceptable and isn’t the best for the team.

“I want guys to show up ready to do that job. All of that other stuff is just fluff. It’s just fluff to give people things to talk about leading into Sunday.”