Crunch the numbers: Playoffs are within reach for Browns 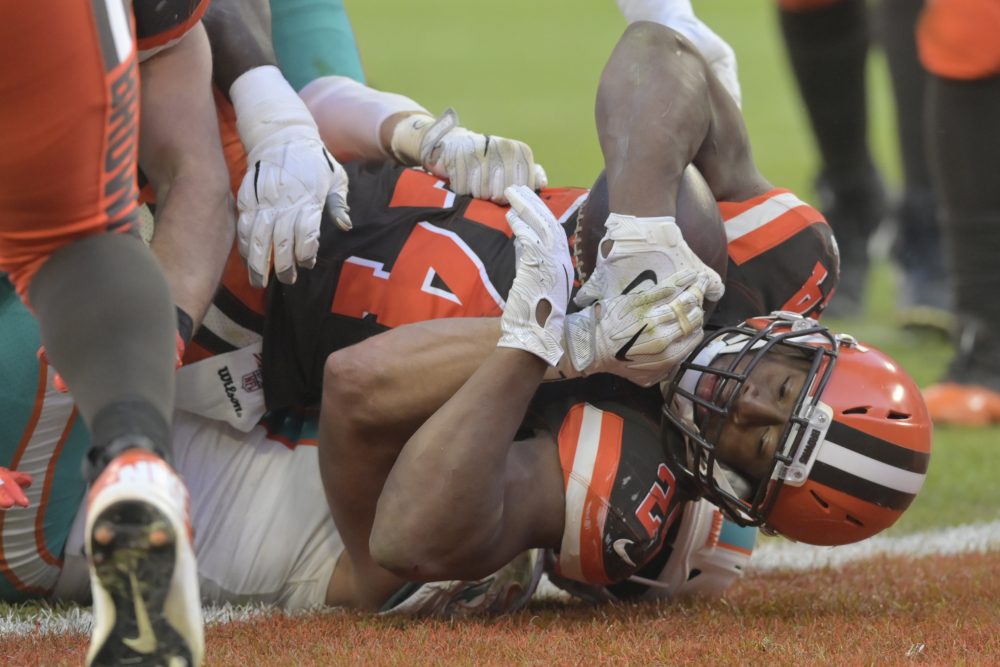 When the Browns dropped to 2-6 with the 24-19 loss at Denver, I told myself I wouldn’t write about playoff possibilities unless they got back to .500.

Rules are meant to be broken.

Perspective changes with a three-game winning streak, and the push for the playoffs is the most relevant Browns story — when we’re not talking about how crazy the rematch with the Steelers will be on Sunday.

The Browns are 5-6 and can reach .500 by completing the sweep of the Steelers at a hostile Heinz Field. The Browns are a two-point favorite, per BetOnline.ag, the first time they’ve been favored in Pittsburgh since 1989, when they won the opener 51-0.

If they win this time, they’ll deserve to be in the thick of the playoff race.

If they lose, I’ll kick myself for jumping the gun.

A loss to the Steelers (6-5) would not only give the Browns seven losses and force them to win out to have any chance at the postseason, it would put them two games behind the Steelers in the chase for the second AFC wild card spot with four games to play.

(Note: In case anyone was holding out hope the Browns could win the AFC North — you know who you are — those chances disappeared Monday night when the Ravens destroyed the Rams 45-6 in Los Angeles. The Ravens are 9-2, have won seven straight since a 40-25 loss to the Browns and aren’t going to have an epic collapse.)

With five games left, the Bills are 8-3 and hold a two-game lead for the first of two wild card spots. If the Browns were to catch them, Cleveland would own the head-to-head tiebreaker after a 19-16 win Nov. 10.

The race for the second spot is jumbled and could come down to the final day of the season Dec. 29.

The Raiders, Titans, Colts and Steelers are 6-5. The Browns are 5-6. The Jets, Jaguars and Chargers are 4-7 and hoping for a miracle.

If the Browns were to rally to reach the playoffs, that would qualify as divine intervention. No team since divisional realignment in 2002 has started 2-6 and made the playoffs.

Yes, the schedule has gotten easier following a brutal stretch. But the Browns are also playing much better, starting with quarterback Baker Mayfield and getting a powerful push from running back Kareem Hunt.

But going 8-0 or 7-1 to end the season is asking a ton. And the Browns will have to finish without defensive end Myles Garrett, who’s suspended for the rest of the season for the helmet bop of Steelers quarterback Mason Rudolph.

The Browns can’t get caught thinking about running the table. They must continue to buy into coach Freddie Kitchens’ “1-0” message.

He started it after the Denver loss, and the Browns have gone 1-0 three times. The point is simplistic — focus on the task at hand, win that week and don’t worry about the big picture, or the playoff picture.

“We kind of had to go into playoff mode a couple of weeks ago, and it is just one game at a time once you get to the playoffs,” Kitchens said Monday. “That is the way it should be all year.”

It’s funny what resonates with players, and when. The 1-0 philosophy isn’t new. In fact, Kitchens has been preaching it since Week 1. But the players finally had no choice but to change their approach.

“That is just where we found ourselves after kind of a rough, rocky start, and that is something we all kind of rallied behind now of just really focusing one week at a time of going out there and doing our jobs and making sure we put our best foot forward to win,” center JC Tretter said.

The New York Times calculates their chances of making the playoffs at 22 percent. They had too much ground to make up and too much traffic in their way.

Here’s the main competition, their remaining schedules and a comment.

A win Sunday makes all of this relevant.

A loss makes it painfully premature.

Browns 41, Dolphins 24: The breakdown — thumbs up, thumbs down, the matchups
Commentary: Breaking down the roster … name by name