Browns committed to making it a rivalry again with Steelers, and Freddie Kitchens says they just need more wins: “We haven’t done anything” 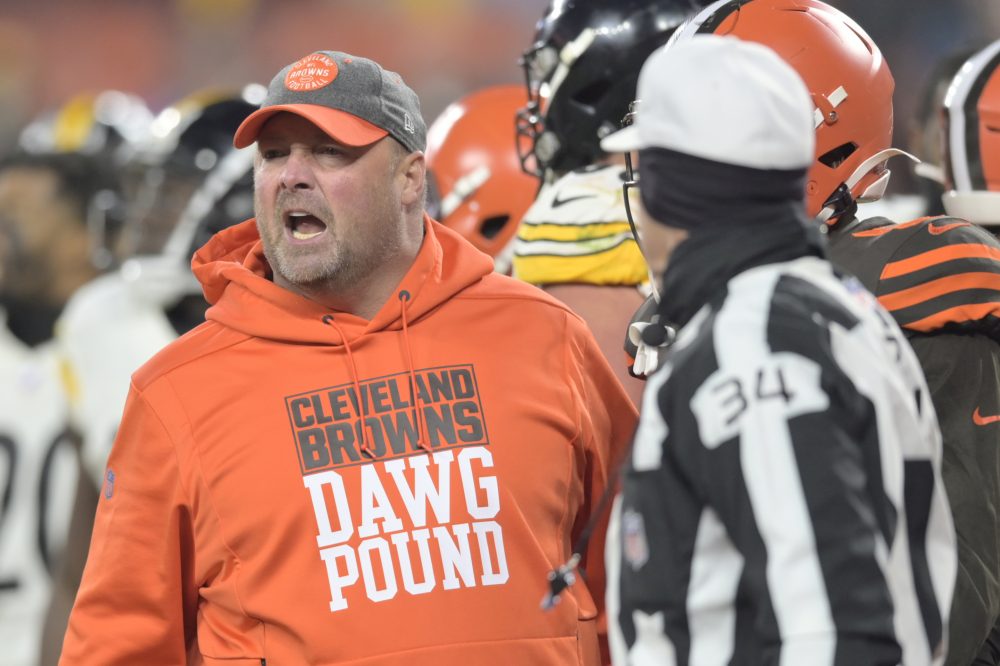 BEREA — Kareem Hunt was raised in Northeast Ohio, first in Elyria then in Willoughby, and has a clear recollection of the Browns-Steelers rivalry.

“Watching the Steelers win against us. I remember that,” he said Wednesday. “Now let’s change it.

The Browns (5-6) beat the Steelers (6-5) the last time they met, 21-7 in the infamous Nov. 14 matchup. Coach Freddie Kitchens said that doesn’t make it a rivalry again.

He was reminded of the win less than two weeks ago but wasn’t impressed, saying that didn’t qualify.

“Not even close,” Kitchens said.

The Cleveland-Pittsburgh rivalry is always special to the fans. It dates to 1950, the cities are similar and only a couple hours apart and the history features a multitude of memorable moments.

But the Steelers have dominated since the Browns returned in 1999, taking plenty of the luster off the matchup. The Browns are 7-34-1 against the Steelers since 1999 and were 0-7-1 since 2014 before the latest win.

“To me, it takes two to have a rivalry, so we’ve got to do our part,” Kitchens said. “That’s probably not going to sit well with some people. But, to me, you’ve got to win your share to make it a rivalry.”

“That is true,” said Hunt, the dual-threat running back. “They’ve had our number for a number of years and we just gotta go out there and compete and show them that’s a rivalry and we’re going to be here for a long time.”

Analysis: It seemed impossible, and still may be a week premature, but Browns have entered the playoff discussion

The Steelers lead the all-time series 75-59-1, including 2-0 in the playoffs. They lead 47-21 in Pittsburgh, including both playoff games and 15 straight.

The last Cleveland win after crossing the turnpike was led by Tim Couch on Oct. 5, 2003. The Browns haven’t swept the season series since 1988, when they won 23-9 at Pittsburgh and 27-7 at home.

“I think everywhere you go this week, it’s beat the Steelers, beat the Steelers,” said left guard Joel Bitonio, who’s in his sixth season and has the longest tenure on the team. “It’s something that the people of Cleveland care about very deeply, and I think that roots itself into the players.

“It hasn’t been close lately. They’ve kicked our butts since the Browns have been back. But we’re trying to change that coming up these next couple years. It’s something people in Northeast Ohio have a pride for is beating the Steelers, and it’s something that the team has a pride for. They’re in our division. They’re a team that’s been the dominant team in the division and we’re ready to try and take them down.”

Steelers coach Mike Tomlin is 20-4-1 against the Browns but has never taken the success for granted. He was asked if Cleveland’s win in the Thursday night game that ended in a brawl awakened the rivalry.

The Browns have been awful against pretty much everyone in the two decades they’ve been back, with their only playoff appearance in 2002 — they lost at Pittsburgh — and the last winning season in 2007. But the Steelers’ dominance twice a year has given Clevelanders a more acute pain.

“I always knew there was a rivalry and Pittsburgh I’m sure always felt they were the big brother of the relationship,” said receiver Odell Beckham Jr., who experienced it for the first time Nov. 14. “I think it’s saying, ‘Enough is enough.’ We’re over here to be a part of something that’s different than what’s in the past and to be the more physical team and to be the one that comes out on top.”

Running back Nick Chubb tries to treat each opponent the same but knows this one is different.

“I mean, you can tell by how it ended,” he said, referring to the brawl. “In order to make it a rivalry, we’ve got to win more games. It’s probably a rivalry to us but not to them and we’ve got to continue to win games so we can get up there with them.”

The ugly ending two weeks ago adds a dynamic that’s unusual but not unprecedented. Joe “Turkey” Jones slammed Pittsburgh’s Terry Bradshaw on his head in 1976, and Browns running back William Green and Steelers linebacker Joey Porter were ejected in 2004 after fighting in pregame.

Nothing rose to the level of the recent melee that drew punishment for 33 players, earned Myles Garrett an indefinite suspension for hitting Steelers quarterback Mason Rudolph on top of the head with Rudolph’s helmet and will cost the players and organizations more than $2 million combined in fines and lost wages.

“We keep it moving. That incident is in our rearview mirror,” Tomlin said.

“I feel like they circled this game after that last one,” Hunt said. “So they’re definitely going to come out ready to hit and do whatever it takes to inflict their will on us. So we’ve just got to go out there and be more physical.”

Kitchens has been preaching composure all season and will again this week. The game also has huge playoff implications.

Kitchens believes his young team learned about controlling its emotions from the way the last meeting ended.