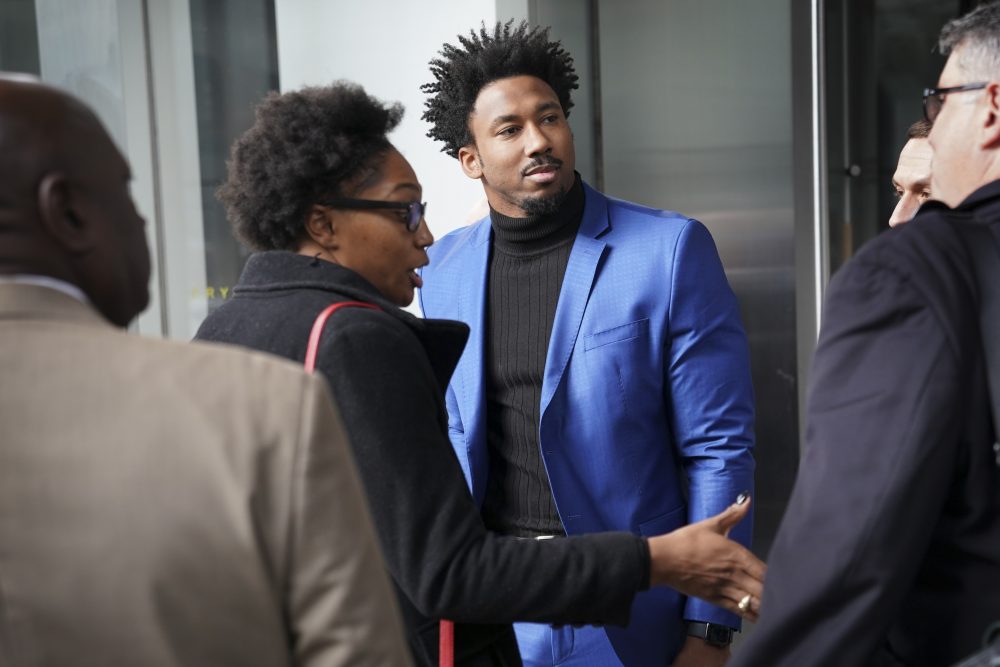 He participated in the Feed the Need event Tuesday in Cleveland, his first public appearance since being indefinitely suspended for clubbing Steelers quarterback Mason Rudolph over the head with Rudolph’s helmet.

“It’s a time,” Garrett, who declined to talk about football, told reporters of his suspension. “You know, you have ups and downs in your life and right now I’m giving back to people. I’m having time to spend with my family and my friends and so I’m just making the most out of that.”

Garrett will miss the rest of this season, but the team expects him to be reinstated for the start of next season. He isn’t allowed to be at Browns headquarters during the suspension but honored his commitment to help feed the hungry at TownHall, as the event raised money for St. Augustine Hunger Center.

“I just love giving back,” he said. “There’s nothing more to it.”

The Browns have supported Garrett throughout the ordeal, including his accusation that Rudolph called him a racial slur before the brawl Nov. 14. Owner Dee Haslam made a strong statement Sunday before the 41-24 win over the Dolphins, wearing a winter hat with Garrett’s “95” on it.

“That was beautiful,” Garrett told 3News. “I didn’t get to see it myself, I saw some pictures secondhand but it got me right in the heart, I felt that.”

The Browns travel to Pittsburgh on Sunday for the rematch, and emotions are expected to run hot on the field and in the stands. Steelers director of communications Burt Lauten denied a report from Andrew Fillipponi of 93.7 The Fan in Pittsburgh that the Steelers were considering not allowing Garrett jerseys into Heinz Field.

“A source close to the situation (me) confirmed these reports are absolutely false,” Lauten tweeted.

Some of the tension from the rematch was let out when coach Mike Tomlin announced Tuesday that Rudolph wouldn’t start Sunday. Rudolph was benched in a 16-10 win over the Bengals on Sunday, and Tomlin will stick with undrafted rookie Devlin “Duck” Hodges.

“He took care of the ball and provided a spark,” Tomlin said, adding Hodges “has not killed us” in three games, including one start.

“Did you see him last game?” Richardson said after the win over Miami.

“I do not think that single player is going to be the difference of how a lot of guys feel going into this game,” he said Monday.

Assuming Rudolph doesn’t come off the bench, defensive tackle Larry Ogunjobi won’t have the chance to knock him down again.

Ogunjobi was reinstated Tuesday after serving a one-game suspension for knocking Rudolph to the ground during the end-of-game fight. Ogunjobi had sacked Rudolph earlier.

The Browns cleared a roster spot by waiving defensive tackle Devaroe Lawrence in a surprise move. Lawrence had started the last two games, the first of his career.

He played in all 11 games this season, recording eight tackles, an interception and a fumble recovery.

Lawrence’s playing time will go to Eli Ankou, who has impressed the Browns since being signed off Jacksonville’s practice squad Oct. 22.

Former Browns linebacker Clay Matthews is one of 25 semifinalists for the Pro Football Hall of Fame 2020 class. He was also a semifinalist in 2012, ’17 and ’19.

Matthews, who played for the Browns from 1978-93, was inducted into the team’s Ring of Honor in September.

The 15 finalists will be announced Jan. 2.