Commentary: Breaking down the roster … name by name 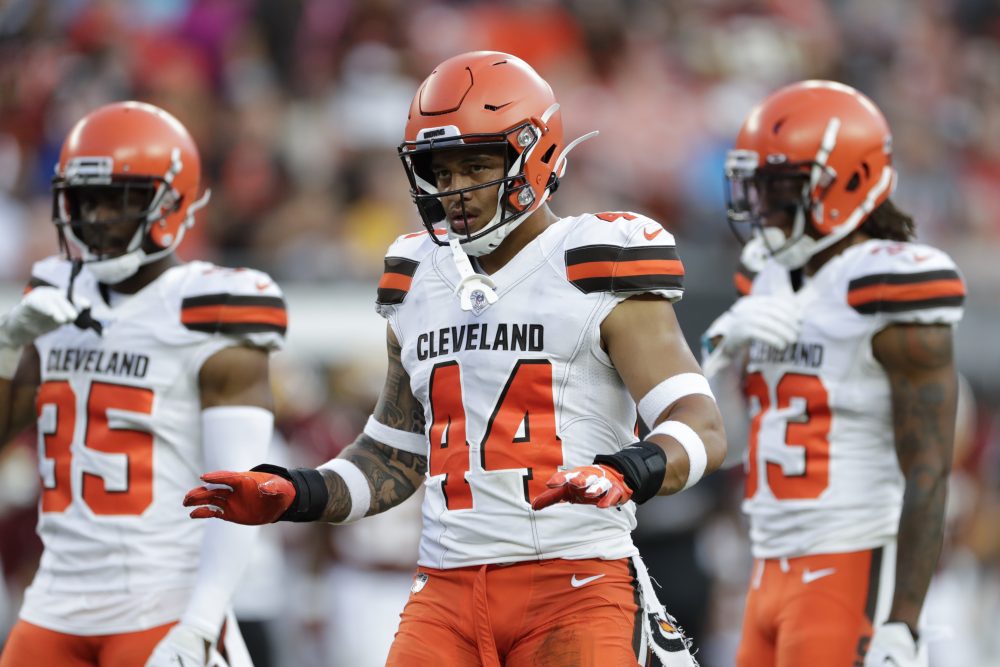 What’s in a name? Plenty. Especially in sports.

Forget about his playing ability, Mickey Mantle had a great name.

So did Bobby Del Greco, who played, though not very well, for six major league teams in the 1950s and 60s.

What kind of roster has general manager John Dorsey built? Because you the reader have a right to know, here is the Browns’ 53-man roster ranked, by name:

SIONE TAKITAKI: To put anyone else above Takitaki would be ticky tacky.

SHELDRICK REDWINE: I’ve got a feeling his career (you can see this one coming, right?) is going to get better with age.

NICK CHUBB: You gotta problem with that? Maybe the most in-your-face name in the NFL. (“I’m Nick Chubb. Who are you?”)

GREEDY WILLIAMS: You can’t get greedy if you’re already Greedy. Am I right, Cleveland?

D’ERNEST JOHNSON: Not to be confused with D’Frivolous Johnson.

KHADAREL HODGE: Come clean, how many KhaDarels do you know?

ODELL BECKHAM JR.: I would have added “Esquire” after “Jr.” but that’s just me.

WYATT TELLER: Please tell me he has a brother named Otto.

DENZEL WARD: Some names are just cool. Ward’s not one of them, but Denzel most certainly is.

RICKY SEALS-JONES: If you want people to remember you, buy yourself a hyphen.

KAREEM HUNT: Sometimes it’s all in the cadence.

BAKER MAYFIELD: It almost sounds like the name of an antique car (“Yep, bought myself a sweet 1910 Baker Mayfield”).

KENDALL LAMM: A good, solid name. And as a newborn baby, that’s all you can ask for.

DAMION RATLEY: Perfect for football, because you don’t want anything to do with a cat named Damion Ratley.

JOE SCHOBERT: Shame on all you sherbet companies out there who have not cashed in on this endorsement opportunity.

ELI ANKOU: How is that pronounced? “Eli.”

DONTRELL HILLIARD: Did I mention sometimes it’s all in the cadence?

JOEL BITONIO: “The only Joel to know is Joel Bitonio” would be a great advertising slogan. If only we had some sort of product.

TAVIERRE THOMAS: A nickname away from immortality. If it were Tavierre “The Derriere” Thomas, he shoots to the top of this list.

J.T. HASSELL: This would be a great name for an annoying superhero.

CHARLEY HUGHLETT: The perfect name for a long snapper. Difficult to spell. Difficult to remember, and a “Charley,” just to drive home the point.

AUSTIN SEIBERT: Just a guess: At one point in his youth he was a Boy Scout.

TJ CARRIE: This is one of those names that looks cool until you look at it closer and you realize it’s just TJ Carrie.

SHELDON RICHARDSON: Sounds like the name of an accountant.

GREG ROBINSON: Sounds like the name of an accountant’s assistant.

JC TRETTER: Not to be confused with TJ Carrie, J.T. Hassel, or Larry Ogunjobi.

CHAD THOMAS: Nothing personal, but I know like eight guys named Chad Thomas.

DEMETRIUS HARRIS: A boatload of points for that first name, but none for the second. Sorry.

RASHARD HIGGINS: And an even shorter walk to here.

TAE DAVIS: I give up. How is Tae pronounced? Ty? Tay? Tah? D’Ernest?

DREW FORBES: If football names were types of houses, Drew Forbes would be a decent three-bedroom ranch.

CHRIS HUBBARD: We’re getting to the end of the list, people!

ROBERT JACKSON: I’m pretty sure he is something like the 10th player in Browns history named Robert Jackson.

BRANDIN BRYANT: Most focus groups give a collective thumbs down to first and last names that are interchangeable.

Crunch the numbers: Playoffs are within reach for Browns
Browns-Steelers Preview: 5 things to watch, 4 key numbers