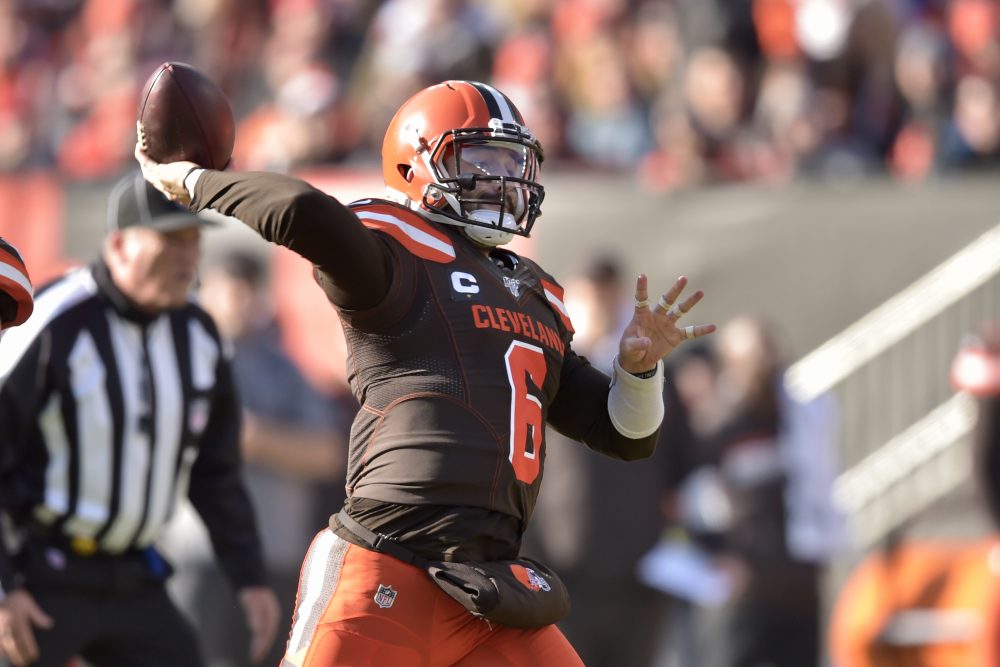 BEREA — Baker Mayfield is back.

So is the deep ball.

After early season struggles, Mayfield has played much better over the last five games, including three games and 157 passes without an interception and a season-best three touchdowns Sunday in the 41-24 win over Miami. The long ball has joined the arsenal the last two weeks.

“Getting good one-on-one shots and our guys making plays,” Mayfield said Wednesday. “We are doing a good job right now of our playmakers are doing exactly what they need to do when they get those opportunities. We need to continue to do that, to take those shots when we get them and play smart when we don’t have those one-on-one deep shots.

“It just needs to continue to be part of our offense.”

The inability to strike vertically was among the offensive problems earlier in the season, which didn’t make sense. Mayfield has one of the league’s stronger arms, likes to take chances and displayed good deep-ball accuracy as a rookie … and he had a new toy in receiver Odell Beckham Jr., who’s known for making plays downfield.

But it’s only been in the last two games the Browns have been able to connect from long distance with any consistency. It’s not a coincidence they’ve been able to extend the winning streak to three games.

Against the Steelers on Nov. 14, Mayfield completed a 42-yard pass to Beckham and a 41-yarder to receiver KhaDarel Hodge. Against the Dolphins, he hit Landry for 37 yards down the sideline and Beckham for a 35-yard touchdown down the middle.

Browns committed to making it a rivalry again with Steelers, know they need more wins

Beckham got behind the defense on a route out of the right slot, then went up and got the ball.

“It’s just everything that’s going on,” he said. “It’s the way we’ve been calling the plays, the way we’ve been lining up, making it tough for teams and they have to play it different than they were in the beginning of the season.

An overlooked factor in the emergence of the deep ball is the influence of the running game, which has become even stronger with the return of Kareem Hunt from suspension. Defenses must respect Nick Chubb and Hunt, which limits their ability to take away all the levels in the passing game.

Whether it’s the chicken or the egg, as Mayfield has picked up his game, the offense has come close to finally clicking on all cylinders. In the first six games, he completed 56.6 percent for 1,496 yards, five touchdowns, 11 interceptions and a 66.0 passer rating with 16 sacks. In the last five, he’s completed 64.4 percent for 1,225 yards, nine touchdowns, two interceptions and a 96.8 rating with 11 sacks.

“I have tried to build consistently to get better each week,” he said. “Obviously the turnover last week was strictly due to a bad throw and it was bad feet. I just try to improve each week and continue to get better for our team.”

He threw behind Beckham on a slant that ended the streak without a turnover but went 24-for-34 for 327 yards, three touchdowns, an interception and a season-high 118.1 rating. Beckham isn’t satisfied with his role, performance or the team’s record but he’s happy with his quarterback.

“I feel like we all know what he’s capable of. It was only a matter of time,” Beckham said. “Adversity is a big test of character and he’s gonna stand tall every single time. He’s just been able to put it all together.

“He’s the leader of this team. He’s being the general, just keeping everybody in motion and making big plays and making big throws and doing what he does. It’s no surprise for us.”

Mayfield got his first win over the Steelers two weeks ago to improve to 1-1 as a starter in the rivalry. He appreciated the achievement but didn’t get carried away.

“Any division game to us means a lot more,” he said. “Thursday night of a short week, the physical game that it is against Pittsburgh, that was a good win.”

The Browns head to Pittsburgh on Sunday looking for a season sweep, to get back to .500 and to continue the push toward the playoffs. Mayfield’s trying for his first win in Heinz Field and to snap Cleveland’s 15-game losing streak there.

The environment will be more rancorous than usual after the last meeting ended in a brawl. Mayfield embraces such hostility.

“That’s who Baker is,” Chubb said. “He’s competitive, he’s intense and he’s not going to back down. If anything, he’s going to step his game up even more being in a situation like that. That’s the person he is.”

Odell Beckham Jr. has “mixed emotions” about ending TD drought during frustrating season
Sheldon Richardson says “times are changing” in rivalry with Steelers, and “it’s time for a new captain”