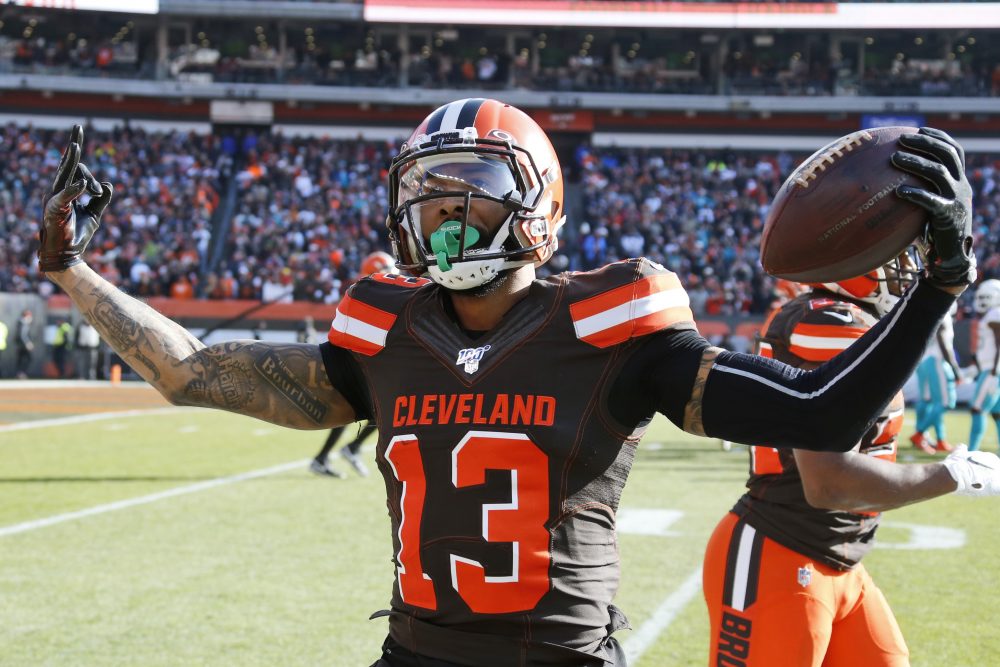 BEREA — Odell Beckham Jr. had spent nine games trying to get back into the end zone. When he got there Sunday against Miami, he didn’t know how to react.

“Uh, I don’t really know how to explain it, it was what it was,” the superstar receiver said Wednesday. “I wasn’t super excited about it knowing and feeling the disappointment that I should have been in here a long time ago. It was pretty mixed emotions.”

That about sums up his first season with the Browns.

Beckham arrived in a trade in March and was greeted with out-of-this-world expectations for him and the team. Neither has met them, although both have shown signs of getting there lately.

Beckham caught his first touchdown in Week 2 against the Jets, an 89-yard catch-and-run. He went a career-long eight games without another score until Baker Mayfield found him behind the Dolphins defense for a 35-yarder.

He’s on pace for 78 catches, 1,129 yards and three touchdowns. Solid numbers, for sure, but they’d be career lows for him in a full season.

Beckham’s been targeted 30 times over the last three games, matching the total from the first three games, but didn’t have an answer when asked how it felt.

Beckham did find joy in sharing a big day with fellow receiver and best friend Jarvis Landry against the Dolphins. Beckham had six catches for 84 yards and a touchdown, and Landry had 10 catches for 148 yards and two touchdowns.

“Kind of before the game I felt like it was going to happen and it was what me and him talked about,” Beckham said. “Just to see it come to fruition was cool. It’s something that obviously we both expected more of and still have some opportunities with the last couple games of the season to do so and to find ways to win. Anytime we can help be a part of a win it’s always going to feel great.”

Mayfield noted the importance of involving Beckham early in games.

“Keeping teams honest with all of our weapons and keeping everybody involved, it helps all of us out,” he said. “For our guys up front, getting the ball out quickly, that helps them, and then getting the ball in the playmakers’ hands gets them a hot hand and gets them comfortable to make that big play later on.”

The 41 points against Miami were a season high and there have been other signs of the offense finding a groove during the three-game winning streak.

“We’re just finding ways, putting different packages in, getting the ball to all your playmakers and it’s been working out pretty good for the last three weeks,” Beckham said. “There were bits and pieces early on in the season, it was just putting a complete game together. It’s not just the offense, it’s putting a game together on special teams and defense. Playing a complete football game.”

Odell Beckham Jr. is right on with prediction of big day for Jarvis Landry, then joins in fun as both reach end zone
Deep impact: Baker Mayfield finally making long-distance connection with receivers