Notes: Greedy Williams OK with getting picked on by QBs, just wants the picks to start coming 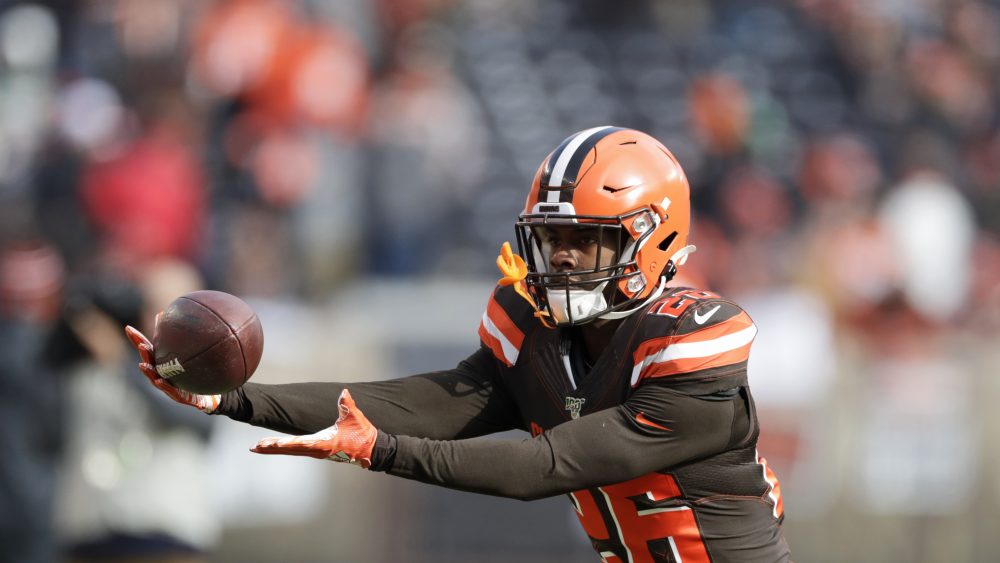 BEREA — Rookie cornerback Greedy Williams realizes opposing quarterbacks have shied away from Pro Bowl cornerback Denzel Ward and tried to pick on him.

“Yeah, it ain’t been too successful, but they just keep trying and I like the competition that the teams are giving me,” Williams said Friday. “Hopefully I can make some plays, that’s the main thing, I’m trying to make the plays.”

Williams, the No. 46 pick out of LSU, has started all seven games he’s played and is still looking for his first interception. He missed four games with a hamstring injury but has been back for five, collecting two passes defensed and 20 tackles.

“I’m playing pretty well,” he said. “I ain’t made no plays. But as far as the targets and the catches that they’ve been throwing at me, I feel like my percentages are good. I’ve just got to make plays on the balls that come my way.”

He expects the first interception to open the floodgates.

“Definitely when you get one, you’ve got a lot more coming after that,” he said. “I’m just trying to be one of the biggest playmakers out there.”

Williams said he was going to rub middle linebacker Joe Schobert’s hand before the game against the Steelers on Sunday. Schobert has two interceptions in each of the last two games.

“You got to get around and let it rub off on you a little bit, let it spark on you,” Williams said.

Schobert has been impressed with Williams.

“Rookie corner in the NFL is probably, behind quarterback, one of the hardest things to do, on an island against the most elite athletes and you’re not allowed to touch them anymore,” he said. “He’s doing a good job. If he can get his head around, get some interceptions, I think that’d go a long way.

“Corner’s a confidence position, Greedy has confidence, we have confidence in him, he’s doing a good job.”

Williams was fined $28,075 by the NFL for a helmet-to-helmet hit that knocked Steelers receiver JuJu Smith-Schuster out of the game Nov. 14. He plans to appeal.

“They sent it out, but they’re going to receive it back,” Williams said. “We ain’t getting no fine on that one.

“My initial contact was not like to take his head off. I was just trying to make a legal football tackle. I’m not out there trying to hurt nobody and take them away from feeding their family. I pray he has a speedy recovery and just get better and get back out on that field.”

He will also appeal the $3,507 fine for entering the area of a fight during the end-of-game brawl.

“Can’t let ’em take none of my money,” Williams said.

Vernon has missed three straight games but returned to practice this week. He was limited all three days.

“We are just kind of playing it by ear right now and just seeing what we get,” coach Freddie Kitchens said. “We have a couple more days.”

Vernon would help offset the loss of Myles Garrett, who’s suspended for the rest of the season. Without Vernon, two backups would start.

“It is going to be a great boost if he can go,” coordinator Steve Wilks said. “He was playing at a high level before he left.”

Robinson was placed in concussion protocol Wednesday after arriving at team headquarters and reporting symptoms. It’s rare for a player to exit the protocol within a few days, but the Browns didn’t rule him out for the game and he had resumed some activity.

** The Steelers will mostly likely be without their top two skill position players. Smith-Schuster (knee) was ruled out, and running back James Conner (shoulder) was listed as doubtful.

“I’m telling you guys that I think I’m ready and I feel great,” he said.

Yet the team didn’t activate him from injured reserve to play against the Dolphins and Kitchens was non-committal if he would face the Steelers.

“I am not willing to say yay or nay right now,” he said.

The Browns would have to clear a roster space. Brown, Ricky Seals-Jones or Stephen Carlson are the candidates at tight end, or they could keep five — which is a lot — and cut from a different position.

On Monday, Kitchens said Ward was playing well but “I want more.” Ward saw the quote and took it as motivation.

“It helps me compete within myself and work harder every day and just do what I can to help this team win,” he said. “I want more out of myself, as well. There’s always room for improvement in our game, and my game specifically there’s definitely room for improvement.

“I’ve just got to stay consistent and keep doing what I’m doing and make plays to help this team win.”

Kitchens wants more turnovers from Ward, who believes Kitchens sees great potential in him. Ward doesn’t have an interception in seven games this year.

“I think he has a lot of respect for my game and I appreciate that, and I’ve just got to go out and show it every game,” he said.

Wilks said he’s never seen an interception binge like the one Schobert’s on.

“Joe is playing at a high level. Probably one of the best linebackers in the league right now in how he is performing,” Wilks said. “He is a leader for us. He commands the defense out there, getting everybody aligned and things that we ask of him.

“He is smart, he understands, he studies film and he has great anticipation in exactly what is coming. We always talk about the formation is talking to you, and you have to listen with your eyes. He does some great things in regards to that pre-snap/post-snap play, and he puts himself in position to make plays.”

Wilks sounded as if he wasn’t on board with the decision to cut defensive tackle Devaroe Lawrence on Tuesday. He had started two straight games.

“Devaroe is one of my favorites,” he said, adding he leaves the personnel decisions to general manager John Dorsey and Kitchens. “He was doing some good things for us. He is a good player.”

** Cornerback TJ Carrie will appeal the $3,507 fine he got for entering the fighting area during the brawl. He doesn’t think players should be fined for trying to break up a fight.

“You need some level-headed guys to come over there and make sure everything is calm and collected,” he said. “Your brother’s on the ground getting mauled, and you get a fine for helping him and trying to de-escalate the situation. I just don’t agree with it.”