Sheldon Richardson says “times are changing” in rivalry with Steelers, and “it’s time for a new captain” 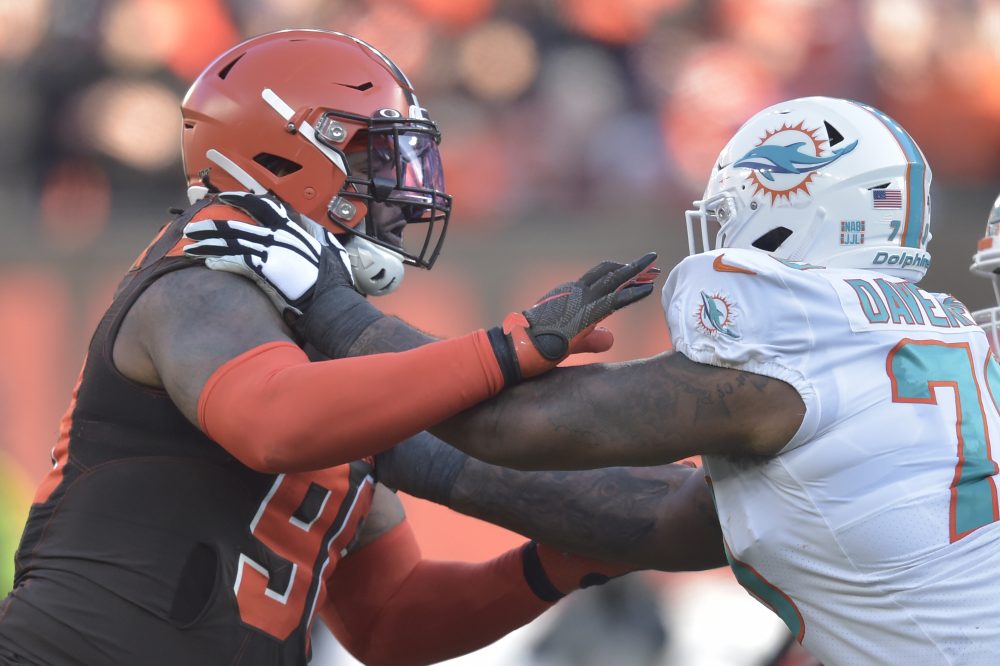 BEREA — Sheldon Richardson believes the bullying has stopped. The Browns are no longer helpless vs. the Steelers, their oldest and most bitter rival.

“Times are changing,” the defensive tackle said Friday. “And they’re not used to it.”

Richardson then referenced the Browns’ 15-game losing streak in Pittsburgh that stretches to 2003. The Browns (5-6) have the chance to end the skid and sweep the season series Sunday at 1 p.m. at Heinz Field.

“So that’s kinda crazy,” he said. “Kudos to them for what they’ve been doing. It’s time for a new captain.”

The Browns had been 0-7-1 against the Steelers since 2015 before the 21-7 victory Nov. 14 that ended in a brawl. The Browns dominated, allowing one scoring drive and holding the Steelers to 236 total yards, 58 rushing yards and 2-for-11 on third down.

“We beat the stuffing out of them last game,” Richardson said. “But it’s a new week up and I’m pretty sure they’re going to come in revved up and ready to play and beat us the way we beat them. So we’ve got to make sure we don’t allow that.”

Browns committed to making it a rivalry with Steelers, but coach Freddie Kitchens says they “haven’t done anything”

The Steelers (6-5) have benched quarterback Mason Rudolph, who threw four interceptions in the first meeting, and will start undrafted rookie Devlin Hodges. Rudolph was in the main event with Browns defensive end Myles Garrett on Nov. 14.

He tried to rip off Garrett’s helmet, pushed him off with his foot in Garrett’s groin and charged after Garrett when they had been separated. Garrett then swung Rudolph’s helmet, which he had yanked off, and hit Rudolph on top of the head with it.

Garrett later accused Rudolph of calling him a racial slur before the fight, and Rudolph denied it. Garrett was suspended indefinitely and will miss the rest of the season.

Richardson was asked if the rematch 17 days later will be less contentious without Rudolph playing.

“Highly doubt it,” he said. “They’re still trying to go out there and get a victory, too. And you get past the incident that happened, that was a butt-kicking by us.”

The game was violent well before the melee in the final seconds. Browns free safety Damarious Randall was ejected and fined $28,075 after knocking receiver Diontae Johnson from the game with a concussion on a helmet-to-helmet shot. Browns cornerback Greedy Williams was fined $28,075 for a helmet-to-helmet hit that sidelined receiver JuJu Smith-Schuster with a concussion. Browns defensive end Chad Thomas was penalized 15 yards and fined $21,056 for a shot to the head of Rudolph.

Richardson doesn’t think the officials should go over the top Sunday in an attempt to keep the game from getting out of control.

“I don’t want it to be ticky-tacky, either,” he said. “Let us play football. Anything outside of football, call it.”

Richardson, who turned 29 on Friday, played his best game of the season Sunday in a 41-24 win over the Dolphins when the Browns needed him the most. He had five tackles, two sacks, a forced fumble and a pass defensed to carry a line that was without Garrett, tackle Larry Ogunjobi (one-game suspension) and end Olivier Vernon (knee injury).

“Starting with Sheldon Richardson, tremendous job in really trying to neutralize the run game,” coordinator Steve Wilks said. “He has been a leader from Day 1, but the way he stepped up last week with those guys being out and really just trying to corral everybody and then to have the performance that he had out there on the field, I just commend him tremendously for his efforts and, most importantly, his performance.”

Richardson has 43 tackles, two sacks, two forced fumbles and two passes defensed in his first season with the Browns after signing a three-year, $37 million contract as a free agent. He and Ogunjobi will face a strong Steelers interior line that will be without seven-time Pro Bowl center Maurkice Pouncey, who was suspended two games for punching and kicking Garrett while he was on the ground.

“They’ve got a pretty solid backup,” Richardson said of B.J. Finney. “He knows the scheme, so I’ll leave it at that. An NFL center to me.”

Richardson has been a part of other fierce rivalries, including Vikings-Packers and Jets-Patriots, and Browns-Steelers fits right in.

“This will definitely be one of the tops, you know?” he said. “Nostalgic, old school, division, downhill, in your face, trying to run the ball most of the game, pass when needed type of division. That’s what I’m used to playing in or used to seeing growing up as a kid.”

He was looking forward to Sunday.

“I love high intense games, with some meaning behind them for divisional races and all of that stuff,” he said.

The Browns can’t afford to fall to 5-7 and two games behind the Steelers with a loss. They’ve been playing “must-win” games since dropping to 2-6 with a loss to Denver on Nov. 3.

“It’s playoff time for us. It’s just that simple,” Richardson said. “There ain’t no more cushion. It’s just one week at a time, but it’s definitely an urgency, a gut check for us to go out there and get these dubs. Anything else is, we’re done.”