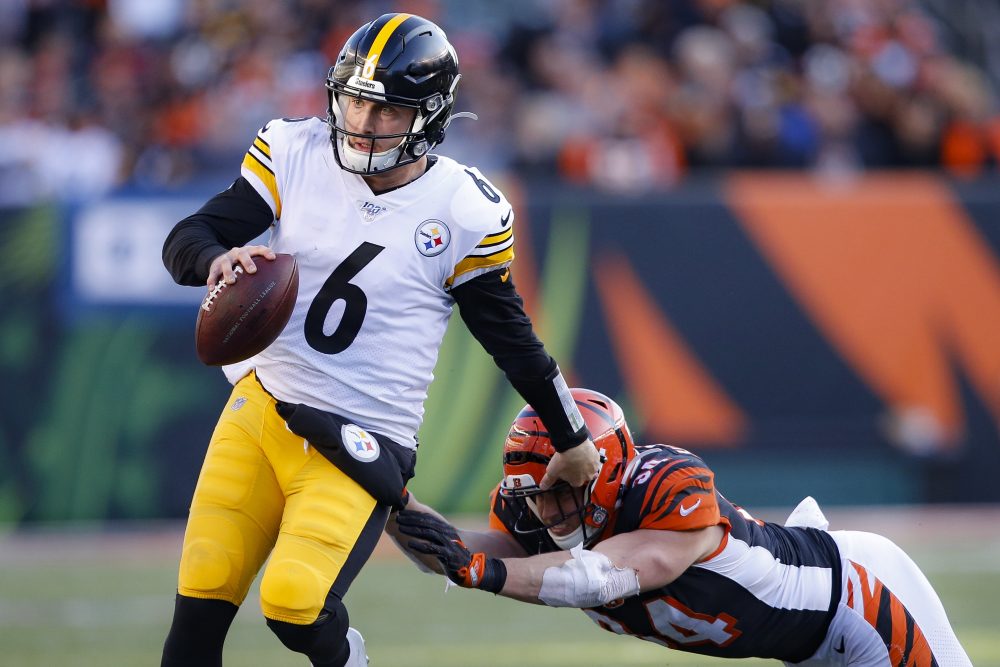 Steelers quarterback Mason Rudolph was a central figure in the first meeting between the teams Nov. 14, throwing four interceptions then scrapping with Browns defensive end Myles Garrett. Unless something unforeseen happens, Rudolph won’t play a role in the rematch.

Undrafted rookie Devlin Hodges will start after replacing an ineffective Rudolph last week in Cincinnati and leading a comeback win. Hodges (6-foot-1, 210 pounds) is the all-time career passing leader in FCS history with 14,584 yards, surpassing Steve McNair of Alcorn State in 1991-94. He’s the first quarterback from Samford to appear in a professional game since Jimmy Tarrant of the Miami Seahawks in 1946.

The NFL is a different world, but in limited action Hodges has handled himself well. He’s made one start — a 24-17 win over the Chargers — and come off the bench twice, completing 67.5 percent (27-for-40) for 318 yards, two touchdowns, an interception, two sacks and a 97.7 rating. He connected with receiver James Washington for the go-ahead 79-yard touchdown last week but has been predominantly a dink-and-dunker. Greedy Williams said coordinator Steve Wilks challenged the corners to play tight man-to-man, but the Browns are also preparing for Hodges to take some shots downfield.

“Most of the time when you play divisional games like this, opponents don’t show a lot and then they come out and do the opposite,” nickelback TJ Carrie said. “So I definitely think he’s going to take his shots all over the field. They have the receivers to do that and I think that they feel comfortable doing that.”

The Browns also expressed concern over Hodges’ ability to scramble, something Rudolph doesn’t do. Hodges has rushed eight times for 29 yards with a long of 21.

“No. 1, I think he is athletic,” Wilks said. “He does a good job in really trying to buy time with his feet. We have to be ready for a possibility of a little bit more rollout and a little bit more boot trying to get him on the perimeter. Most importantly, we have to make sure that we contain him.”

Steelers coach Mike Tomlin complimented Hodges on protecting the ball and said he can’t turn it over like Rudolph did in the first matchup. The Browns defense has six interceptions in the last two games and could change the game by getting Hodges once or twice.

Pittsburgh is missing much of its offensive firepower. Quarterback Ben Roethlisberger is on injured reserve, receiver JuJu Smith-Schuster was ruled out and running back James Conner listed as doubtful. So the Steelers have turned to an opportunistic, playmaking defense to score points, win games and get them in the playoff hunt.

If the Browns don’t turn it over, it will be incredibly difficult for the Steelers to score enough to beat them. The Browns didn’t have a turnover in the 21-7 win two weeks ago and have just one in the last four games — a Baker Mayfield interception last week — after 11 in the previous three games and at least one a game through the first seven.

Protecting the ball should be the top priority but it won’t be easy, as the Steelers are second in the NFL with 28 takeaways — 14 interceptions and 14 fumble recoveries (of 25 forced).

“Don’t give ’em the ball,” receiver Odell Beckham Jr. said. “Play our game, don’t beat ourselves and find a way to win the game.”

“We think Minkah is a very good player,” coach Freddie Kitchens said. “He affects the game in several different areas. We expect him to come with his best game Sunday.”

Kitchens has a decision to make, and it’s an important one. Should he trust that the Steelers offense can’t outscore the Browns, go conservative and run the ball 40 times? Or should he take a couple of chances downfield early in an attempt to get a lead and force the Steelers to play catch-up? If the Browns get to 20 points, the Steelers might not be able to pass them.

If Kitchens chooses the second option, which fits with his gambling nature, Beckham and receiver Jarvis Landry will be the targets deep. Landry had 10 catches for 148 yards and two touchdowns last week against Miami, and Beckham added six catches for 84 yards and a touchdown. Landry has emerged as the top option over the past four games with 29 catches for 339 yards and five touchdowns.

“He has had the hot hand,” Mayfield said. “He’s making a lot of plays and taking advantage of his one-on-ones. You can tell he has felt a little bit disrespected that teams are continuing to leave him one-on-one, as well. We are happy for him.”

“Jarvis comes to compete every day,” Kitchens said. “He has done a good job with his preparation, understanding what he needs to do and when he needs to do it. It was evident. At the end of the day, it is about competing for the ball, and he does that just as good as anybody.”

If the Browns can protect long enough, Steelers cornerback Joe Haden is vulnerable to double moves down the field.

Whether the Browns can protect long enough is a huge question. It got even bigger when left tackle Greg Robinson (concussion) was ruled out Saturday.

The Steelers have at least one sack in 52 straight games, the longest streak in franchise history and the longest active streak in the NFL. They have at least four sacks in four of the last five games — the exception was one against the Browns two weeks ago — and have done most of their damage at home. Thirty of their 38 sacks have come in Pittsburgh.

“Home field, crowd. They are able to be off on the snap, but we will be ready for it,” Kitchens said.

The Steelers generate much of their pass rush off the edge with outside linebackers Watt and Bud Dupree. Right tackle Chris Hubbard will be matched up with Watt, and Justin McCray will likely fill in for Robinson and be charged with slowing down Dupree.

Watt is third in the NFL with 11.5 sacks and had the lone sack of Mayfield in the first meeting. He’s first in the NFL with 25 quarterback hits, tied for first with five forced fumbles and tied for third with three fumble recoveries. He has at least a half-sack in eight straight games, the longest active streak in the league. Watt didn’t wreck the game in Cleveland, but Hubbard wasn’t satisfied.

“Last game was OK, I’m expecting a lot more out of myself for this game, just coming out and being more physical and not being able to let him get to the quarterback,” he said. “So that’s my goal, just keep Baker clean.”

McCray should get help on the other side dealing with Dupree, who’s tied for 21st in the league with seven sacks. The entire protection unit must keep its focus and handle the loud environment that makes hearing the snap count nearly impossible.

“They rally around their fans,” left guard Joel Bitonio said. “With all that crowd noise and that energy and they play ‘Renegade’ and all that, all that fun stuff, they get excited and they get ready to roll. But it’s our job to slow it down a little bit.”

HOLE IN THE MIDDLE

The fallout from the brawl will be felt throughout the game. Nowhere more than in the trenches.

The Browns are without Garrett for the rest of the season. The Steelers will be without seven-time Pro Bowl center Maurkice Pouncey for the second of a two-game suspension. The Browns get back defensive tackle Larry Ogunjobi after a one-game suspension.

“Focused, locked in, just ready to go out there and make plays,” defensive tackle Sheldon Richardson said of Ogunjobi, who’s second on the team with five sacks.

“Larry has been great. It has been good to get him back in the building,” Wilks said. “He is very excited to be here. He has had a great week of practice. He is just looking to get out there and perform.”

Ogunjobi and Richardson will try to take the shortest path to Hodges, going through backup center B.J. Finney.

“He’s that guy for them, he’s the one that has the team on his back and he makes a lot of calls and he’s a great leader of that team,” Hubbard said of Pouncey, a friend and former teammate.

Pouncey punched and kicked Garrett while he was on the ground during the brawl. His three-game suspension was reduced to two on appeal.

“Maurkice is a significant player and leader for us, but I think we are more than capable,” Tomlin said. “We have the benefit of having B.J. Finney, who is a veteran, multipositional backup who has been called on a lot over the years to play center and guard. He is more than capable.”

The Browns’ record when leading after three quarters

Yards per rush by the Steelers

Yards per rush by the Browns