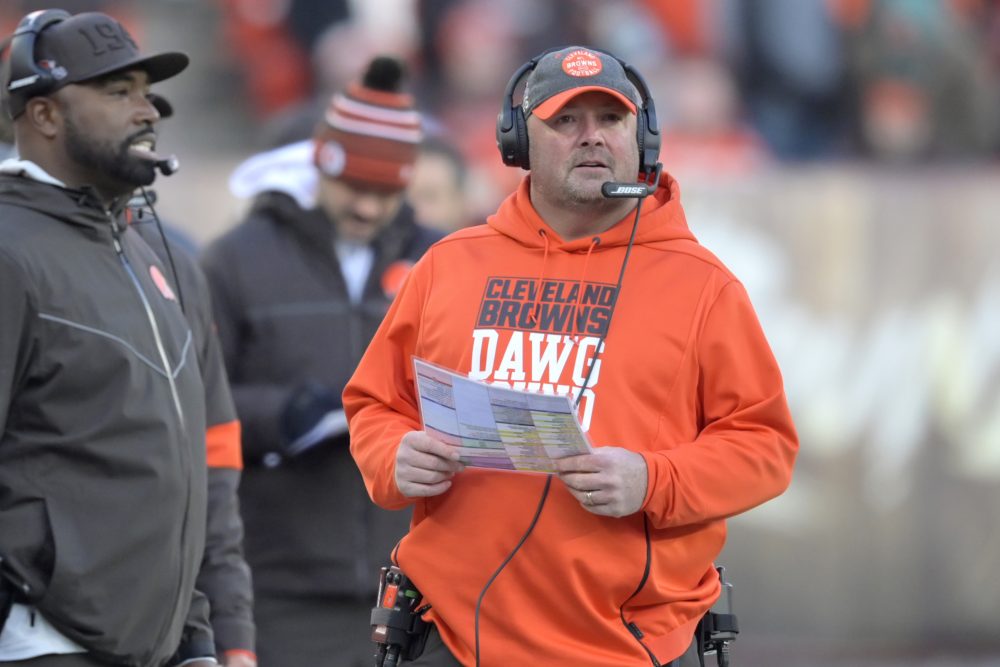 The conk on the head with a helmet. The foot to the groin. The punches and kicks. The concussion-causing helmet-to-helmet hits.

Browns coach Freddie Kitchens will coach his first game at Heinz Field on Sunday in the most anticipated Browns-Steelers game since the playoff matchup after the 2002 season. He stoked the flames Friday night with his wardrobe.

Kitchens posed for a picture with a fan at the movies. His jacket was open and revealed a “Pittsburgh started it.” T-shirt made by GV Art + Design Apparel.

It references the end-of-game brawl that marred Cleveland’s 21-7 win over Pittsburgh on Nov. 14 and promises to have emotions running hot Sunday.

“We kind of set the fire here, I know they can’t wait to get this home game just to strike back,” rookie cornerback Greedy Williams said Friday. “I know it’s going to be an intense game throughout the whole game.”

Kitchens, who spent the week talking about the need for focus and composure by his players, received the T-shirt from family as a joke for his 45th birthday Friday. They went to see “A Beautiful Day in the Neighborhood,” the movie about Mr. Rogers, and Kitchens was recognized and posed for the picture. A team spokesman said Kitchens thought the shirt was covered by the jacket.

Doesn’t get much better than this! Someone spotted Freddie Kitchens rocking our Pittsburgh started it shirt tonight! Tag a friend if you can’t get any more pumped up for Sunday! The Rivalry is real!! Cleveland let’s go!!!

Many Cleveland fans have argued the fight began with Steelers quarterback Mason Rudolph trying to rip off the helmet of defensive end Myles Garrett, whose rough takedown of Rudolph a second earlier was subsequently fined by the NFL. Rudolph also tried to push Garrett off him with his foot in Garrett’s groin and chased after Garrett when they had been separated.

Garrett then swung Rudolph’s helmet, which he had yanked off, and connected with the top of Rudolph’s head. Garrett was indefinitely suspended and will miss the rest of the season. Rudolph wasn’t suspended, was fined $50,000 and has been benched.

Garrett accused Rudolph of calling him a racial slur before the brawl. Rudolph denied it.

All of that, and the shirt, will serve as the backdrop for the game with huge playoff implications.

“It is going to be a great atmosphere to play in,” Kitchens said. “We know that, and we will be ready for that.

“Listen, we want to play smart, we want to be tough. That is because that is what usually wins football games.”

Veteran cornerback TJ Carrie played for the Raiders in the Black Hole but doesn’t think he’s ever experienced what’s waiting in Pittsburgh.

“After what happened the previous game, I think this is probably going to be the most intense game I’ve been in,” he said. “They’re going to come with some fire in their belly and fire in their eyes to want to get back in some way or fashion, whether that’s being more physical or outhustling us.”

“It’s going to be crazy, I know that for a fact,” said right tackle Chris Hubbard, who spent four years with the Steelers.

The game is about a lot more than renewing acquaintances.

The Browns are 5-6, trying for their first four-game winning streak since the end of the 2009 season and hoping to make up more ground in the playoff chase. The Steelers are 6-5, looking to stay ahead of the Browns and complete a miracle run after the loss of quarterback Ben Roethlisberger in Week 2.

“A playoff atmosphere,” quarterback Baker Mayfield said. “This game means a lot to both teams. Looking at the bigger picture, we talk about the singular focus, but there is no hiding how much this one really means.”

Coach Mike Tomlin said the Steelers live for this type of game.

“It is what competitors crave, and we have a lot of respect for it,” he said. “We like to show that respect by performing.”

Heinz Field, where the Browns have lost 15 straight and the Steelers are 108-41-1 (.723) all time, will be loaded with Terrible Towels and awash in animosity toward the Browns. Yet Mayfield has seen worse — when he returned to Texas Tech after transferring to Oklahoma.

“I would say probably the most violent place I have played in was my return back to Lubbock. I don’t think Pittsburgh could match that. I really don’t,” he said. “It was about 40,000-50,000 people screaming, ‘F You, Baker.’ We will see.”

He thrives in the hatred.

“There is nothing like playing on the road. That goes for anywhere you go,” Mayfield said. “You play on the road and to try to win the game in a hostile environment is always fun.”

The Browns haven’t won on the road since Week 4 in Baltimore, dropping three straight. They haven’t swept the Steelers in a season since 1988.

“We have to go in there and play with high energy,” running back Nick Chubb said. “Their fans will be into it, but we’ll be there. We’ll be ready.

“We’ve got to go in there, we’ve got to stay composed and feed off the energy they’re feeding off of and just stay together.”

Running back Kareem Hunt, who’s added an important element to the offense since returning from a suspension three games ago, believes everything that transpired Nov. 14 will be in the minds of the Steelers.

“I feel like they circled this game after that last one,” he said. “So they’re definitely going to come out ready to hit and do whatever it takes to inflict their will on us. So we’ve just got to go out there and be more physical.”

The Browns are committed to keeping their composure no matter how intense the action gets.

“That’s been one of the biggest emphasis that Coach Kitchens has stressed highly, highly about,” Carrie said. “We’re going into a hostile environment, so we know the emotion needs to be ramped up. But at the same time we have to play smart enough to where we’re not putting our football team in a bad position.

“So making sure that we’re calm and collected and executing to the best of our abilities without affecting the team.”

Browns committed to making it a rivalry again with Steelers, and Freddie Kitchens says they just need more wins: “We haven’t done anything”
Baker Mayfield says sore hand, glove didn’t affect his throwing in 2nd half, and he “fully” expects to play next week