Baker Mayfield says sore hand, glove didn’t affect his throwing in 2nd half, and he “fully” expects to play next week 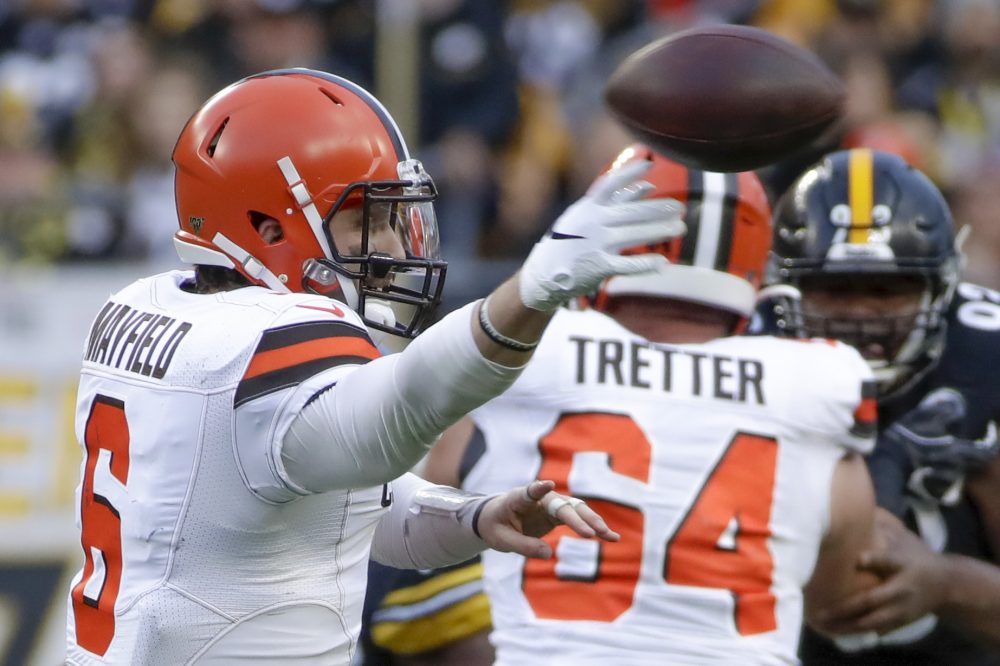 PITTSBURGH — Baker Mayfield’s final throw of the game — to lead a last-minute comeback and keep the Browns in the playoff hunt — sailed behind receiver Jarvis Landry and into the diving arms of Steelers cornerback Joe Haden for a clinching interception.

Mayfield wouldn’t blame his bruised right hand for the misfire. He said the pain and the unfamiliar glove he put on had no impact on how he threw in the second half.

The Browns lost 20-13 to the Steelers on Sunday. They left Heinz Field 5-7, with their playoff hopes dangling by a thread and their quarterback wearing a big bandage on his throwing hand.

He plans on being back in the huddle next week against the Bengals at FirstEnergy Stadium.

“I fully expect to be able to play,” said Mayfield, who’s made every start since taking over for Tyrod Taylor in Week 3 last year.

He hurt his hand when it caught the face mask of outside linebacker Bud Dupree on a follow-through with seven seconds left in the first half and the game tied at 10.

He grabbed the hand at the bottom of the thumb on the palm, walked to the sideline, then ran to the locker room to get X-rays. They were negative and he played the entire second half after Garrett Gilbert threw the final two passes of the second quarter.

“Hit the face mask obviously with a little bit of speed and force on that. Trying to throw a long ball,” Mayfield said. “The X-rays were negative, so that’s good news. Just got a little numb, took some medicine and went back out there, so we’ll see.”

Mayfield wore a white glove on his throwing hand in the second half and said he didn’t know if he’d ever worn one in a game.

He finished 18-for-32 for 196 yards, a touchdown, an interception and a 71.9 passer rating. He was sacked five times and lost a fumble.

He was 8-for-15 in the second half for 98 yards, the interception, fumble and four sacks. The last two Browns losses came on the road at Denver and Pittsburgh to inexperienced quarterbacks Brandon Allen and Devlin Hodges.

“He came back out there and he played,” left guard Joel Bitonio said of Mayfield. “That’s as much as I know about it right now. We’ll see how it goes from there.

“I think he was fine. He fought through it, whatever it was. He’s a tough guy, so he battled.”

Mayfield also played through a big hit from outside linebacker T.J. Watt, who was unblocked and drilled Mayfield in the right armpit as he threw earlier in the second quarter. The Browns took a timeout, and Mayfield threw a 15-yard touchdown to running back Kareem Hunt on the next play.

“Kinda forgot about that till now,” Mayfield said. “That’s just a good hit.”

Mayfield’s hand was hurt throwing a deep pass for receiver Odell Beckham Jr. down the right seam. The play started with 16 seconds left.

Kitchens appeared content to run out the clock at the end of the half after Tavierre Thomas muffed the kickoff and the Browns took over at the 7-yard line with 55 seconds left. But Hunt had two 16-yard rushes, so Kitchens called two timeouts and elected to throw down the field.

“Well, after we popped that one run, your focus kind of changes,” Kitchens said. “Actually had a shot to do something there at the end to Odell.”

The Browns, who scored 10 points over their first three drives, got only three points after Mayfield was hurt. The 34-yard Austin Seibert field goal cut the deficit to 20-13 with 7:30 left in the game.

The Browns quickly got the ball back at the Pittsburgh 30-yard line after a Terrance Mitchell interception and 28-yard return. But Landry couldn’t make a difficult catch downfield, and Mayfield was sacked on third down, forcing a pooch punt.

Then came the final drive, which started at the Cleveland 20 with 1:45 left. Mayfield threw incomplete, was roughed by Dupree and threw for 5 yards to Hunt before the interception by Haden, the No. 7 pick of the Browns in 2010.

“Had all the confidence in the world that we’d have a chance to go down and score,” Mayfield said. “Just a little bit off on the seam throw. Joe Haden made a good play covering between No. 1 and 2 and dividing those guys and picked the ball off.”