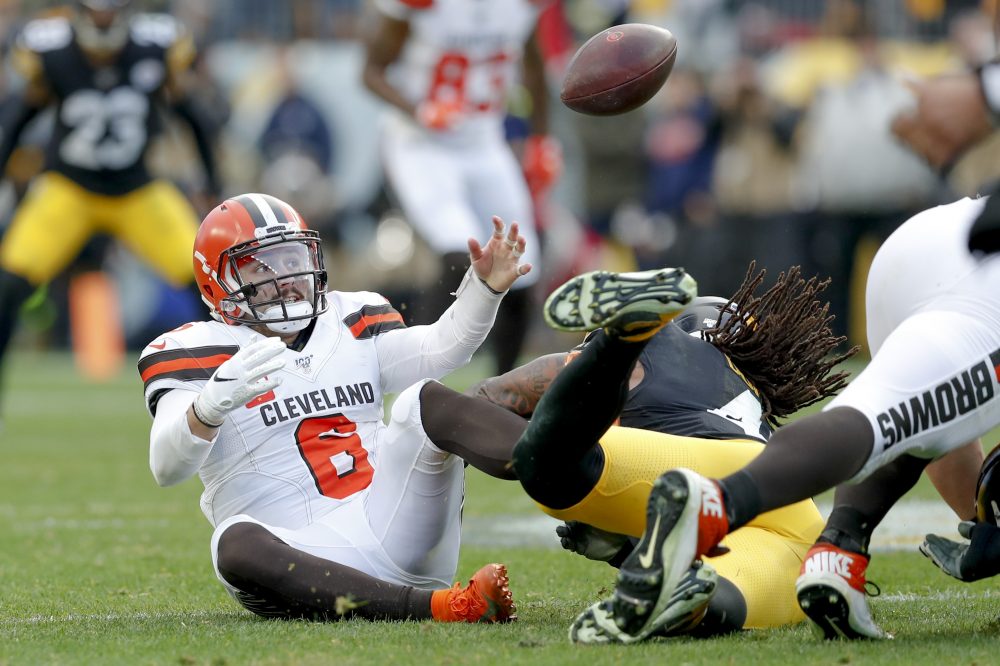 PITTSBURGH — The Browns led by 10 points. The Heinz Field crowd was quiet. Undrafted rookie Devlin “Duck” Hodges was playing quarterback for Pittsburgh, and didn’t have his No. 1 receiver, running back or center.

The Browns were poised to change everything.

The Browns gave up 20 straight points and lost 20-13 on Sunday in a game that could’ve changed the course of the season, and perhaps the franchise. Instead, they reminded the NFL they still have a long way to go.

“Our guys got a dose of what playoff atmosphere was like,” first-year coach Freddie Kitchens said. “We need to continue to get better so we respond better the next time out.”

The Browns will most likely be watching the playoffs from home for the 17th straight season after falling to 5-7. They dropped two games behind the Steelers (7-5) and the Titans (7-5) for the second wild card spot in the AFC.

“We can’t lose any more. It’s that simple and we know one week at a time and we’re on to next week,” defensive tackle Sheldon Richardson said. “Our hopes aren’t dead. It’s unlikely, but you know, we’ll see.

“You can cancel us off if you want to, but we’re going to keep fighting till the end.”

The Browns were in position for their first four-game winning streak since the end of 2009, their first sweep of the Steelers since 1988 and their first win in Heinz Field since 2003. They’ve lost 16 in a row in their new house of horrors, just like they lost 16 straight during the “jinx” at Three Rivers Stadium from 1970-85.

“I told our guys, all three phases could have done something to prevent that or change the outcome of the game,” Kitchens said. “We’ve got to recognize those game-changing moments.”

The Nov. 14 brawl between the teams dominated the discussion in the two-week run-up to the rematch, including Kitchens wearing a “Pittsburgh started it.” T-shirt to the movies Friday night. The hitting was hard, but the game was clean and the animosity took a backseat to the action.

Playing without defensive end Myles Garrett, who was suspended for the rest of the season for clubbing Steelers quarterback Mason Rudolph over the head with Rudolph’s helmet, Cleveland’s defense wilted after being handed a 10-0 lead with 7:40 left in the first half.

Hodges, making just his second start after being undrafted out of Samford, stayed calm and composed and outplayed Baker Mayfield, the No. 1 pick in the 2018 draft. Hodges, who didn’t have receiver JuJu Smith-Schuster (knee), running back James Conner (shoulder) and center Maurkice Pouncey (suspension) attacked Cleveland’s cornerbacks with deep passes down the sidelines and had repeated success.

Receiver James Washington had four catches for 111 yards, including a 31-yarder against rookie cornerback Greedy Williams, a 30-yard touchdown against nickelback TJ Carrie and a 44-yarder against cornerback Denzel Ward to set up the go-ahead touchdown in the third quarter. Hodges was 14-for-21 for 212 yards, a touchdown, an interception and a 95.7 rating.

“We’ve got to do better in the backend, controlling everybody,” Richardson said.

The front seven had its issues, as well.

Hodges scrambled for 9 yards on third-and-7 in the third quarter and was sacked only once, on the first drive by end Chad Thomas. The biggest failure by the front came with 5:35 left and the Steelers with the ball at the half-yard line.

Benny Snell Jr. ran up the middle for 11 yards on first down, starting a 46-yard drive that took nearly four minutes off the clock, forced Kitchens to use all three timeouts and flipped field position.

“At the end of the day we’ve got to stop the run, and we didn’t,” said defensive tackle Larry Ogunjobi, who returned from a one-game suspension for knocking down Rudolph during the brawl. “So we’ve just got to sew it up.”

The Browns got the ball back at their 20 with 1:45 left, and Mayfield was intercepted by former Browns cornerback Joe Haden on a pass behind receiver Jarvis Landry. Haden said he couldn’t have written a better script.

Mayfield played the second half wearing a glove on a sore right hand after banging it against linebacker Bud Dupree’s face mask in the final seconds of the first half.

Mayfield went 18-for-32 for 196 yards, a touchdown, an interception and a 71.9 passer rating. He was sacked five times and lost a fumble on a sack by Dupree in the third quarter.

The offense came out clicking, getting a 31-yard Austin Seibert field goal on the first drive and a 15-yard touchdown catch by running back Kareem Hunt on the third drive. Pittsburgh had one first down and 9 yards when the Browns took the 10-0 lead.

The Steelers rattled off 20 straight points, as the Browns offense went stagnant. Mayfield fumbled in the third quarter and was sacked on third down in the fourth before threatening to stage a comeback. But given chances, the Browns managed only another Seibert field goal.

“We’ve just got to stay on their necks,” tight end Demetrius Harris said. “When we had them 10-0, we just got to keep doing what we did in the first half. We came out sluggish in the second half. That’s what I feel like got us beat.”

The most glaring blown chance was when Terrance Mitchell — playing after Williams left with a shoulder injury — intercepted Hodges on the first play after the Browns had cut the deficit to 20-13 and returned it 28 yards to the 30.

Landry couldn’t hang on to a deep ball cornerback Mike Hilton broke up, Hunt caught a short pass for no gain and Mayfield was sacked on third down. A Seibert pooch punt put the ball at the 1.

“Anybody’s going to say they should’ve had it, but Juice (Landry) was telling me that was going to be a tough f-ing catch,” Harris said. “But at the end of the day I’ve got to make the play and I’ve just got to find a way and just hold onto it and don’t let the ground make the decision for me.”

The ball, the momentum in the rivalry and the playoffs all slipped through the fingers of the Browns.